June 15, 2010
"We're havin' a tea party across this land...if you love this country, come on and join our ban," excuse me for starting this article singing a line from my "American Tea Party Anthem," but I feel good. Sharon Angle endorsed by Tea Party Express came out of nowhere to win the race for GOP U.S. Senate candidate in Nevada. 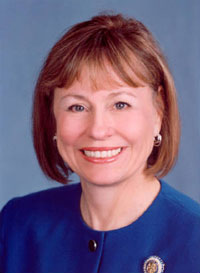 I am Lloyd Marcus, Tea Party Express tour performer and spokesperson. I met Sharon Angle on the campaign trail while on TPX II tour. You know what it is like to be around a proud parent who loves their child? I was impressed that Sharon Angle displayed that same kind of enthusiasm whenever she spoke about Nevada. Like a proud parent, Sharon seemed to know every interesting and not so interesting fact, past and present, about her beloved state.

Also refreshing about Sharon is in these politically correct times where the slightest reference to God can get one branded as a fanatic by the media, Sharon is not defensive about her faith.

Unfortunately, sounding corny by today's political standards, I believe Sharon to be a person of character.

Sharon Angle's amazing victorious win in Nevada represents what this incredible inspired Tea Party Movement is all about. No big political machine was behind Sharon Angle funding, orchestrating and pulling her strings. I witnessed this woman investing long hours and traveling many miles to speak at countless tea parties. Sharon boldly spoke about principles and values most Americans have been longing to hear out of the mouths of candidates. 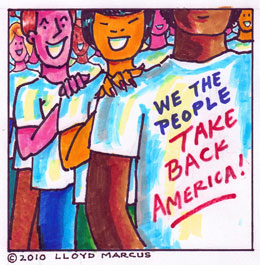 Talk about an awesome grassroots effort, Tea Party Express rallied the Tea Party Movement around Sharon Angle and she or should I say "we" won! We are going to need all hands on deck to bring down the Harry Reid evil empire in November.

Growing beyond the narcissism of my youth, I have learned that certain things in life are bigger than me. I encourage Angle's challengers for the candidacy to lick their wounds and rally their support around Sharon Angle. The defeat of Harry Reid is bigger than they and Nevada. Reid's defeat is crucial to the preservation and restoration of America as our Founding Fathers intended.

Warning. Now that the liberal mainstream media knows which republican candidate to target for destruction in Nevada, expect them to viscously go after Sharon Angle and the Tea Party Movement which supports her.

They will launch a "Shock and Awe" campaign against Sharon Angle probably starting with their standard "republicans are racist bombs." Then, the liberal mainstream media will pump up their claims that "the Tea Party Movement is racist." Thus, further confirming Angle has to be a racist because of the movement's support of her. While such accusations are absurd and baseless, they can be effective with a general public who is not really paying attention.

Folks, please do not fall for the heinous evil lies of the liberal democrats and their media minions. I am a black conservative who has attended over 200 Tea Parties traveling on the Tea Party Express. Tea Party patriots do not oppose Obama's race; many even voted for Obama. They simply oppose President Obama's far left radical and socialist agenda.

Despite the liberal mainstream media's relentless efforts to convince Americans otherwise and to make every issue about race, Obama's skin color is irrelevant to tea party patriots.

Sharon Angle is only the tip of the iceberg of candidates birthed by the Tea Party Movement. Make no mistake about it, the liberal mainstream media is "all in" for Obama and socialism. Regardless of their loss of credibility, subscribers and viewers, they will not report the truth about Obama and his agenda.

Another tactic which the democrats and media minions will use against our candidates is the corruption card. I could not turn on my TV without hearing "republican Mark Foley blah, blah, blah." And yet, when democrats were the center of numerous scandals, I had to do a Google search to discover their political party.

Liberal democrats and the liberal mainstream media have a weird perverted mindset. They believe because human beings sometimes fail to meet standards, it hypocritical to have standards. Thus, they love it when a "goody two shoes" conservative is caught sinning.

While I am not suggesting we lower our standards of behavior, we should not immediately throw our candidates under the bus upon the slightest fall from grace.

Brother and Sister patriots, we are in the battle of our lives for our freedom, liberty and culture against a rabid enemy within which is as relentlessly committed to our defeat as the robot in the movie, "The Terminator." The liberal democrats and media minions will never give up.

We must stay vigilant, united and supportive of our Tea Party Movement candidates.