March 10, 2011
Please consider the validity of what I am about to say rather than having a knee jerk reaction dismissing it as being "over the top." Folks, we have an irresponsible egocentric evil man occupying the Oval Office. 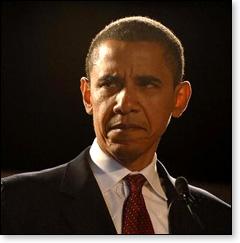 The democrats and the liberal mainstream media sold the American people on Obama, "the man." Despite Obama's zero experience at running anything, they said a leader with his spirit and heart was "what we have been waiting for."

The elephant of which I speak and America's major problem is "Obama, the man"; socialist, divisive and evil.

My dad says a snake can stay under water a very long time just like a fish. But eventually, it must come up for air. Why? Because, it is not a fish. It is a snake. Obama continues to come up for air revealing his true self.

President Obama said the Tea Party is racist. The liberal media, NAACP and democrats have been relentlessly promoting this same baseless allegation. When final confirmation comes down from the highest office in the land, the Oval Office, that the Tea Party is racist; the allegation becomes "official" in the minds of millions. President Obama is slandering millions of decent hard working Americans who simply disagree with his progressive/socialist agenda.
http://nation.foxnews.com/tea-party/2011/03/02/obama-says-tea-party-racist-new-book

Obama saying "race is a key component in the tea party protests" is simply a smooth crafty political way of making his point; which is unmistakable. I guarantee Obama's homeys on the left "got it" and cheered and exchanged high fives upon hearing it. President Obama said the tea party is racist; adding fuel to the Left's efforts.

Think of the repercussions. Obama's indictment of the Tea Party will birth tremendous racial discord across America in schools, churches, and etc. Obama's proclamation will cause Americans to double down on their already extreme caution when criticizing our black president. Sadly, I suspect such intimidation is a part of Obama's plan; anything to empower his mission to "fundamentally transform America."

Make no mistake about it, Obama and company have successfully intimidated many white Americans into not dissing the black president in public.

I stopped in a fast food restaurant for a burger. Around fifteen white seniors were having lunch. I overheard them ranting about Obama's overreaches and socialist policies. Upon seeing me, a black man, they became silent. I was tempted to say, "Please continue, I hold-heartedly agree with you!" Too bad they did not notice my Tea Party Express t-shirt.

Barack Hussein Obama received more votes than any other presidential candidate in American history. So Obama alleging millions of Tea Party patriots are simply upset because America elected a black president is disingenuous, absurd and manipulative.

Obama is exploiting his race and sacrificing national race relations solely to implement his progressive/socialist agenda. Callously and strategically, the president of the United States is pitting millions of black and white Americans against each other. Lord help us, that is pure evil.

A fine black young adult whom I have known for years has always appeared to be racially color blind. He idolizes Obama. Suddenly, I have noticed this kid beginning to view everything through a racial lens. His latest absurd statement, "Friends" is a racist TV show because there are no black cast members."

While I admit this example is anecdotal, I suspect Obama's divisiveness is inspiring millions of Americans to choose sides along racial lines.

Before knowing the facts, Obama immediately assumed the white police officer was guilty of racial profiling in the Professor Gates case. This suggests Obama has racial emotional baggage. Such a luxury can not be afforded the president of "all Americans." Obama's justice dept has even said due to past racism, they will give blacks a pass in certain criminal situations.

Obama is not who most Americans thought he was and is exactly who the liberal mainstream media hoped he would be; their Great Black Hope for implementing their progressive/socialist agenda.

They will do whatever it takes to protect Obama; ignoring his character flaws, lawlessness, deceptions and lies. If Obama says two plus two equals five, the liberal media will defend it as being the "New Math." We cannot trust the liberal media to tell us the truth regarding Obama.

Obama's inauguration brought tears to the eyes of millions of Americans. Blacks are only12% of our nation's population, which means it took several million white votes to put Obama in the Oval Office. Thus, most of the American tears of joy were white.

President Obama is fully aware of this truth.

Obama willfully dividing Americans by exploiting his race for political gain is a despicable betrayal of the whites who elected him. But even more disturbing, it reveals the true character of the man running our country. America deserves much, much better.