Lloyd Marcus
Teaing it up in Vegas to defeat Obama

May 25, 2011
I just returned home to Florida after co-hosting a 3-hour radio-thon in Vegas. We raised funds for the Campaign To Defeat Obama in 2012, of which I am Vice Chair.

Las Vegas is the epitome of unlimited "outside of the box" anything is possible thinking. I love visionaries. Imagine the guy in a Bellagio hotel board meeting who said, "I realize we are located in a desert, but let's put a 1000-foot fountain out front with water shooting 250 feet in the air dancing to beautiful music!" http://bit.ly/irddGx 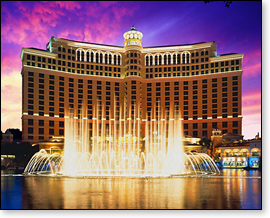 Then, there is the guy at the Mirage hotel who said, "Let's put a volcano out front which erupts with fire every hour." Viva Las Vegas!

I had a wonderful exchange with one of the doormen at my hotel whom I will call Joe (not his real name). "Excuse me sir, are you that tea party guy?" I replied, "Yes." "I thought that was you."

Joe, who is a union member, gave me the inside scoop regarding the illogical re-election of U.S. Senator Harry Reid. Nevada has high unemployment and ranks number one in the nation for foreclosures. Why on earth would voters re-elect Reid? According to Joe, union thugs bullied members who were not Reid supporters. They also pressured uninterested union members to vote and sent buses to take them to the polls. Joe said the union's intimidation tactics had no effect on him.

I offered Joe a tip for helping with my luggage. Joe said, "No way pal, I ain't takin' your money. I really appreciate what you are doin'."

Before leaving my hotel room for the radio station, I read an email from a black woman. "Mr. Marcus, what is your tea party doing for African-Americans?" I thought to reply, "Absolutely nothing!"

Why should we be pandering to blacks, Hispanics, or any other group? We are saving America for all Americans...period!

Then it dawned on me, we are doing something that will dramatically benefit "African Americans." We are getting rid of Barack Obama in 2012.

Black unemployment rate under Obama is sky high, up to 16%. http://bit.ly/jeoKAQ

The abortion rate among black women far exceeds that of other groups. 50% of black babies are aborted. Obama enthusiastically supports Planned Parenthood and abortion.

So, to the black woman who emailed me asking what the tea party is doing for African Americans, we are performing a major service guaranteed to enrich the lives of not just blacks, but all Americans. We are kicking King Obama out of the Oval Office in 2012.

Special thanks to all of the patriots across the country who called in and donated during our Campaign To Defeat Obama radio-thon. While we were extremely grateful for the larger contributions, I found the twelve and eighteen dollar donations particularly heartwarming.

Such specific amounts imply the callers gave all they could afford. That's great. This is a We The People movement, with everyone doing their part and whatever they can.

As I flew out of Vegas headed home, I say goodbye in a way which pays tribute to the late, great King of Rock & Roll, Mr. Vegas: "Marcus has left the building."