September 10, 2011
Obama's jobs speech was reminiscent of a cliché scene in cowboy movies. A loud-mouth guy stands on the steps of the jail-house and enrages the crowd to overrule the sheriff, drag out the prisoner, and hang him without a trial.

Obama used his bully pulpit to say, in essence, if those Republican SOBs do not pass my jobs bill immediately without review, they should be politically lynched. Unquestionably, Obama's speech had a bully edge to it. Pass my jobs bill NOW! 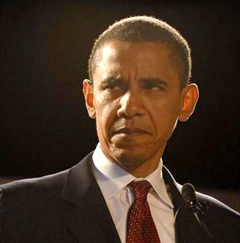 Obama lied about all of the freebies in his jobs bill being "paid for," just as he did to pass Obamacare.

In his typical manipulative, deceptive fashion, Obama said several "right things" such as government getting out of the way of small business, while his administration does the complete opposite.

The centerpiece of Obama's speech was his despicable signature exploitation of class envy and demonization of the rich. Obama in his speech reduced the American Dream to being a union worker with good wages and benefits. Obviously, Obama considered entrepreneurs with higher aspirations to be part of the problem. How dare they seek to have more than anyone else? To each according to his needs. Scary. Very scary and evil.

As expected, Obama's job speech was written using the left's same old play book. We Tea Party patriots knew what Obama was going to say in his "jobs speech" before he delivered it.

OK class, what will be Obama's minions' next move to force Republicans to pass his jobs bill NOW? I hear you yelling the correct answer. You guys are toooo cool, tooo smart, and right on target! I give you all an A+. Obama's minions will proclaim everyone questioning Obama's job bill to be racist.

Folks, this president is divisive and evil. We must vote him out in 2012. God bless.