Lloyd Marcus
Americans are better than who Obama thinks we are

February 8, 2012
Along with their ever-present accusation that anyone who criticizes or disagrees with America's first black president is a racist, class envy is the centerpiece of Obama's re-election campaign.

It is extremely disheartening that the president of the United States believes he can win the votes of a majority of Americans by exploiting the sin of covetousness and hatred for the rich. In every speech, Obama claims that the rich are not paying their fair share. Please excuse my frankness, but Obama is lying. 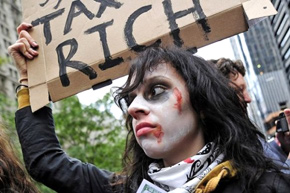 Here are the facts.

Half the country — yes, I said half — do not pay taxes at all. Zero! The majority of federal income taxes (70%) are paid by the top 10 percent of income-earners. http://bit.ly/pgh5Wh As for Obama's claim that we can solve America's financial problems by forcing the rich to pay more, it is despicable, manipulative, and hate-inspiring nonsense. There are only 8,000 Americans who earn over 10 million dollars per year. If Obama confiscated all their money, it would finance our government for only 24 days. Then what?

What group of Americans will Obama attack next by trashing and demonizing them to gain public approval to confiscate everything for which they have worked hard, suffered, sacrificed and risked all for "government" redistribution?

Our national debt has tripled since Obama has been in office. Now, I know that that does not mean a lot to most Americans. Well, allow me to put it in perspective. Every minute, we spend 3 million dollars that we do not have, borrowing most of it from China. Every minute! Our debt is bankrupting the future and enslaving our great-great-great-grandkids.

So, you can understand why I find Obama's rants about the rich not paying enough and how people will die unless Republicans raise the debt ceiling so disingenuous and unsupportable.

But there is a much greater issue at hand. Who does this man (Obama) think, we, the American people, are? The Obama administration and his media minions are trying to convince us that the entitlement-minded OWS lowlifes represent "mainstream Americans." They are lying.

I represent mainstream Americans. I began working when I was about ten years old. I had a paper route and worked pulling copper out of old motors for my neighbor across the street, Mr. Buddy-Roy, in his backyard. At 15, my dad got me a work permit, and I acquired my first real job during the summer at Park Sign Co. in Baltimore. There I learned how to silk-screen signs.

Interesting sidebar: experience prompted Berry, the owner of Park Sign, to always get his money upfront for political signs, because if the candidate did not win the race, Berry would not get paid.

Back to my point. Like me, most Americans do not believe they are entitled to the fruits of a fellow American's labor. And yet, this is who Obama thinks we are and desires us to be.

We all remember our classmates who smoked dope, cut classes, and dropped out versus the kids who studied, worked hard, and became doctors. According to Obama, in his "community organizer" way of thinking, the Democratic party, and the Occupiers, the kid who became a doctor is a selfish, greedy rich person who achieved his success on the backs of the poor dope-smoking dropouts.

Please do not think I am saying everyone who is poor smokes dope. Reasonable people get my point.

Obama and company have launched a war on achievement, portraying the highly successful as selfish villains and everyone else as lowly peasant-saints who are suffering because the rich are hogging it all. Clearly, Obama is exploiting man's susceptibility to the sin of covetousness. And to all you Christians who buy into Obama's "fairness" garbage, shame on you. Jesus was not a socialist.

When Judas scolded Mary for pouring her expensive ointment on Jesus' feet rather than selling it and giving the money to the poor, Jesus scolded Judas, saying, "The poor you will have with you always." In essence, Jesus was saying there will always be those who smoke dope, cut classes, and drop out of school. Liberals' relentless efforts to legislate equal outcomes never work. For one thing, humans are diverse in their desires.

The Obama and company vision for America is incompatible with what has made us great. Do we really want to become a nation where government dictates and caps wealth, which they redistribute equally? Heck no!

Freedom to be all one can be is the magic ingredient which has made us the most extraordinarily successful nation on the planet. America is a guy laboring in his basement to build a better mousetrap in an effort to improve the fortunes of his family and himself. Great wealth is his reward for providing rodent relief to millions. If the Obama administration confiscates huge chunks of the successful mousetrap-maker's profits, what incentive is there for him to invest more time, funds, blood, sweat, and tears to improve his product?

It is extremely depressing and sad to think of our great country becoming as Obama sees us — a nation of entitlement-minded losers, all dependent and helpless without government. As I stated, that is not who we are as a people. We are Americans!

Incredibly, we have a leftist president who simply does not get it. We must vote Obama out in November 2012.