July 5, 2015
My sofa felt pretty comfortable. Ninety percent of the time, I'm on the road as chairman of the Conservative Campaign Committee. http://bit.ly/1Nm7PHJ This was a rare occasion to be in town for the Volusia 9/12 Project monthly meeting. I saw the email reminder about the meeting earlier that day and thought it might be good to attend considering the two devastating outrageous rulings handed down by the Supreme Court (Obamacare and same sex marriage). 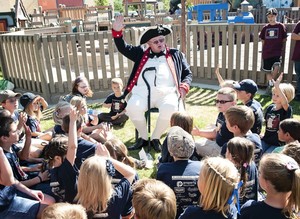 But when 5pm rolled around and I would have to leave at 6pm to get there on time at 7pm, I was sorely tempted to stay home on my extremely comfortable sofa. And yet, almost robotic, I showered and prepared to leave. At our front door, my wife Mary gave me a kiss and said, "I'm proud of you for going." I asked, "Why?" She replied, "I don't know."

The 9/12 group's meeting was the same day the Supreme Court ruled in favor of same sex marriage. I'm a Christian and know that God has everything under control. Still, I was emotionally shaken; angry, frustrated, hurt and concerned about the dark place our country is headed – evil appearing to triumph everywhere you turn.

Thank God I attended that meeting. It was awesome. The hall was filled with patriots, mostly Christian, still passionately engaged after meeting for the past seven years. The Supreme Court's judicial activism though dispiriting appears to have sparked a new level of commitment in them to fight for God and country.

The leader of the group is Ray Sanchez. Wow, I regret not bringing in my phone to record Ray's inspiring rip-roaring opening monologue, pledging to continue pushing back and seeking new ways to defend the Godly traditions and values that have made America great.

There was talk of churches bowing out of 501c3 status; liberating them from government dictates.

A gentlemen at the meeting lamented that the GOP is committed to staying away from social issues. Meanwhile, Democrats/Leftists are cramming their consensus on social issues down our throats. He said the Supreme Courts rulings punctuates how crucially important it is to put people of moral character in office.

Allowed a moment on the microphone to speak about his travels, I was blown away by the passion and commitment of 79 year old Reynerio Sanchez (not related to the group's leader Ray Sanchez). Last year, Mr Sanchez drove 10,464 miles giving away copies of the U.S. Constitution. He also gives away copies of the Ten Commandments; upbeat, enthusiastic and not showing any signs of slowing down. Mr Sanchez read the group a moving "thank you" email he received from a young waitress on the other side of the country. Mr Sanchez's website is: reysan.org

One of the ladies excitedly reported about this year's "Patriot Camp" for 1st to 6th graders. She and her team teach American history through storytelling, drama, crafts and games. I was told that Patriot Camp is extremely popular with kids and parents.

The keynote speaker was Dr Tom LaHue. His topic was "The Decline of the Church" which appears to be a worldwide phenomenon. The stats Dr LaHue shared showing the decline in attendance and effectiveness of the church in our culture were pretty disheartening.

When asked what we can do to change the direction of our country, Dr LaHue said we should "have a burden for America." He said some may be called to Christian ministry, while others are led to fight back in other ways. His point was it is crucial that every patriot continues to do their part; continuing to fight to restore America.

From the ladies who run the group's Patriot Camp to elderly Mr Sanchez touring America handing out Constitution booklets and the Ten Commandments, these are people simply doing whatever they can to restore the country they love. We did not reach this current level of debauchery in America over night. It will take faithfulness, prayer and wisdom to turn it around.

The unwavering determination and commitment of the Volusia 9/12 Project truly inspired me. I suspect their "burden for America" is representative of Tea Party groups across America.

My brother said, in essence, SCOTUS made it illegal to be a Bible believing and functioning Christian. I told him I do not think we are totally there yet, but are swiftly headed in that direction.

I pray that there is a silver lining in the Supreme Court's betrayal, the igniting of a new intensity in the level of resistance to Obama and his minion's fundamental transformation of America.

Brother and sister patriots, go with God. Go with God.