July 18, 2011
If by a disaster, Barack Hussein Obama is re-elected for a second term as President of the United States, all gloves will most likely be off when it comes to his plans for Israel. The spotlight thus turns upon how America's Jewish population will vote.

A recent poll conducted by John McLaughlin and Pat Caddell showed that 43% of all American Jews will support and/or vote for Obama in the 2012 general election. Yet 43% is a considerable and significant drop from the 78% who voted for Obama in 2008. 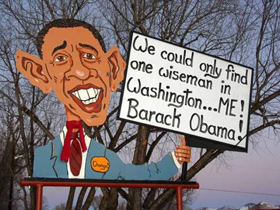 It is received wisdom that Jewish voters are tied by some familial umbilical cord to the Democrat party based upon how their parents, grandparents and great grandparents voted. But the Jewish vote in Florida has now shrunk, according to this poll, to a mere 34% for Obama. And yet more significant, many younger Jewish voters are heading for the Republicans and becoming conservative.

Times are a changing and the GOP contains far more pro-Israel Representatives and Senators than the Democrat party. The Dems have lurched perilously to the Left and it is within the Left and Far-Left that the most egregious anti-Israel sentiments are now to be found. President Obama is the glaring example.

The man-child is the poster boy for the progressives, socialists and all who deride the Constitution. As Commander-in-Chief he can wreak much havoc.

But in a second term all constraints would be gone, he would be free to unleash his scorn upon America as it exists today, and be sorely tempted to withhold America's veto from an Arab-Muslim engineered UN resolution against the Jewish state. So maybe that mystical umbilical cord, which tied Jewish voters to the Democrats and which the leaders of the Dems always relied upon, will at long last wither away.

But there is the black vote, which is practically a given for Obama, whatever financial and social mess he creates. Two superb black politicians, Allan West and Herman Cain, would make outstanding Republican presidential challengers to Obama. Herman Cain has already thrown his hat into the ring. But it remains a conundrum as to how much support either of these patriotic and conservative men would receive from their fellow blacks.

And there is no doubt going to be a major attempt by Obama to win over the Hispanic vote, perhaps by giving amnesty to the 20 million or more Hispanic illegal aliens in the country. Then, of course, there is the Democrat base and the so-called "progressives" who will vote lockstep for Obama. So we can expect a close election.

With so many vested interests involved it will be up to the independents and, perhaps, the Jewish vote this time that will hold the key to the occupant of the White House in 2012.

If Obama wins a second term, the express train taking us to an overwhelming central government on the European model will clatter ever faster even as its couplings leave the tracks.

With so many failed European states providing ample warning to the United States, nevertheless the leftwing ideologues within an old/new Obama Administration will take the train at full speed into financial ruin and oblivion.

If this is not tragic enough for a once great America, the Obama regime's foreign policy will be an even worse catastrophe than it is now. And our allies, what is left of them, will be ill served: None more so than the Jewish state.

In a second term, President Obama will cast his baleful glare upon the reunited city of Jerusalem and will do all in his considerable power to divide it against itself once again. This was its fate during those heartbreaking 19 years from 1948 until 1967 when Jordan illegally occupied the eastern half of the city, along with the Jewish biblical and ancestral heartland of Judea and Samaria — erroneously called by its Jordanian Arab name; the West Bank.

So would the same world that cheered on the tearing down of the Berlin Wall; an ugly wall that had divided a city, now equally cheer on the building of an equally ugly wall to divide Jerusalem? If so, it will be a very sick world indeed.

Just read the book Obama allegedly wrote, "Dreams from My Father." In it he spelled out his personal commitment for all of his dealings with Israel and her Muslim-Arab enemies: "I will stand with them (Muslims) should the political winds shift in an ugly direction."

Obama has already stated that he wants to push Israel back to the 1949 Armistice lines (which he calls the 1967 border) that existed before the June, 1967 Six Day War Israel was forced to fight against genocidal Arab-Muslim aggression. That line was never a border; it was merely where the opposing armies halted.

Imagine a nation whose neighbors are so endemically hostile that they call ceaselessly for genocide against it. Then imagine that at its most populous region that nation is only nine miles wide. Yes, nine miles wide.

That nation was Israel prior to June 5, 1967. That is where the 1949 armistice lines were, and that is the suicidal border Obama plans to push Israel back into: Lines that Israeli statesman, Abba Eban, once described as the "Auschwitz lines," and with good reason.

I fear that far too many Jewish voters will be suckered yet again by President Obama who, during the next 18 months before the election, will keep his anti-Israel powder dry and pretend that he is the best friend Israel ever had in the White House. And if they believe that, they will, alas, believe anything this man says.

It is that mystical umbilical cord to the Democrat party that still deceives so many Jewish voters. Up until now, they seem to shrug off Obama's close, very close, friendships with the likes of Rashid Khalidi, the "Rev" Jeremiah Wright, and "Minister" Farrakhan who have spewed, and continue to spew, anti-American, anti-Jewish, and anti-Israel toxic filth.

Do they not remember the despicable manner in which Barack Hussein Obama treated Prime Minister Netanyahu in his first visit to the Obama White House? And have they forgotten how he once labeled the Jewish state as "occupiers?" Here was the same Obama describing the Jewish people living in their biblical and ancestral homeland as "occupiers."

I am reminded of Israeli Knesset member, Yaakov Katz, who wrote the following advice to American Jewish voters: "Even if the Republicans put up a soda-pop can to run against Obama, it would be the better and wiser choice to give your votes to the "soda-pop can."