Victor Sharpe
The other inconvenient truth: The Arab slave trade 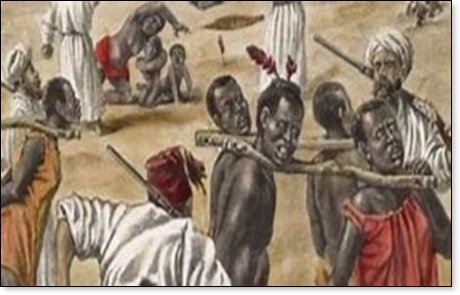 Those of us who know history are familiar with accounts of man's inhumanity to his fellow man. Indeed over the last 2,000 years each century has been more murderous than the previous one.

We understand that Communism is a ruthless killing machine and ideology that must be resisted at all costs, even as so many of our youth foolishly embrace it under the mistaken guise of "social justice."

There are historical and modern events that cast Islam equally as ruthless and deadly: A pitiless "ideology wrapped in a religion," to quote Winston Churchill.

Traveling back in time, we must acknowledge the abiding horror of the slavery practiced by Muslims upon hapless black Africans – a searing crime which has existed since Islam's founding in the 7th century.

While the anti-slavery abolitionist movements in Europe and North America began their epic movement to end slavery during the 19th century. there was barely any opposition to slavery as practiced within the Muslim world.

Nation of Islam leader, Louis Farrakhan, while continuing to spew his vile racist and bigoted words against Christians and Jews, refuses to admit to what Islam has perpetrated down the dark centuries of mans' inhumanity to his fellow man. As an African American, as an avowed Muslim and as a defender of Arab terrorism, his silence is hideously revealing.

It is particularly sad that so many African Americans routinely espouse Islam and take Arab names while ignoring or being utterly ignorant of the Muslim Arab slave trade; even though it led to the deaths and slavery of untold millions of their African ancestors.

Possibly as many as 11 million Africans were transported across the Atlantic. Some 95% went to South and Central America, mainly to Portuguese, Spanish and French possessions and 5% of the slaves went to the United States.

In our politically correct (PC) colleges of 'lower learning,' criticism of whites because of their involvement in slavery has become obligatory. But try to find a university that even teaches about the killing and enslavement of Africans by Muslim Arabs. Few if any exist.

According to Bill Warner, Director of the Center for Studies of Political Islam, most Blacks will only acknowledge the slave trade by Whites. He wrote:

Students are thus never told about the enormous catalog of misery and enslavement perpetrated by Muslim slavers over the centuries; that would be too much of an inconvenient truth.

How can so many black leaders ignore Islam's sinful violence in Africa? Why aren't more black columnists, writers, professors, or ministers speaking out? They are either ignorant or in total denial – thus serving Islam with their silence. For instance. you will never hear the anti-American and Somali born, Ilhan Omar (D-MN), ever condemn the horrors of Islam's atrocious enslavement of black Africans.

One thing whites and blacks have in common is that their ancestors were enslaved by Islam, but today both are mostly too ignorant to know about it. Meanwhile the leftwing media and leftist intellectuals line up as so many ignoramuses. I have often come to the realization that being an intellectual does not necessarily confer intelligence.

As Bill Warner further points out:

It has been reported that the slaves in the Americas and West Indies were primarily put to work in agriculture. In contrast those hapless Africans, mostly women and young boys, brought to the Middle East from Africa ended up as sexual slaves in harems, while the boys were invariably castrated and made to serve as eunuchs – if they survived.

In America the overwhelming majority of political 'thinkers' do not even recognize Islam as a political and ideological force and too many fellow Americans thus slide into dangerous ignorance and apathy, while Islamic Sharia law increasingly infiltrates our Republic and subverts the Constitution.

Victor Sharpe is a prolific conservative writer and author. He has written several published books including The Blue Hour, a collection of thirteen short stories, all with surprise endings. He has also produced the acclaimed four volume work titled, Politicide, which details the Islamist war against the West, Israel and Judeo-Christian civilization. His latest published work is a children's story and coloring book titled, Dragon Rake.

September 24, 2020
Serbia and Israel: The triumphs and tragedies of two nations