Victor Sharpe
Serbia and Israel: The triumphs and tragedies of two nations
The failure to withstand supremacist Islam is dhimmitude or death 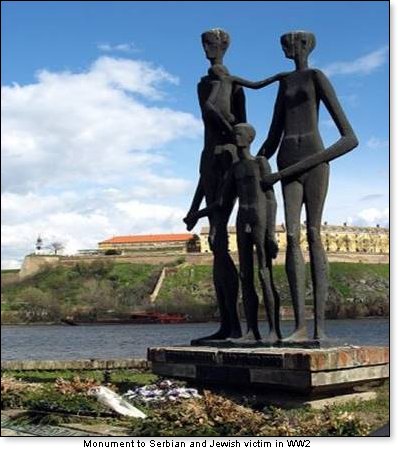 Serbias troubles with Kosovo parallel Israels problems with the terrorist Palestinian Authority. It is very fitting that Serbia and Israel should have political, economic and cultural ties as the similarities between each of the embattled nations are considerable and significant in historical terms. Like the ancient Land of Israel and the modern Jewish state of Israel, Serbia has a magnificent yet tragic history. Both peoples have suffered from Islamic threats, aggression and an uncaring and, too often, hostile world as during World War 2.

In the 14th century, the Byzantine Empire began to crumble, finally falling to the Ottoman Turks in 1453. But in 1389, the Ottoman Turkish sultan, Murad, had begun to lead his Muslim horde against the armies of the Serbian Christian prince Lazar.

Prince Lazar had already been active in resisting increasing Muslim raids against Christian lands in the Balkans and the place chosen to make a stand against the Turks was at Kosovo Polje (the Field of Blackbirds) – the heartland of the Serbian nation. It was in June, 1389, on St. Vitus Day, (Vidovdan), that the rival forces met. The battle began at first with Serbian successes and the great Serbian hero, Milos Obilic, killed the Muslim sultan, Murad. For a while the Turks were in disarray but they managed to recover and by sheer weight of numbers ground down and finally defeated the Serbian army.

Thus began 500 years of Christian suffering under the Muslim yoke

It was not a mere military defeat but the end of Serbian independence. But worse still, the Serbian heartland of Kosovo was lost. For the Serbian people, the blood shed at the Battle of Kosovo in the Field of Blackbirds marks Kosovo as eternally Serbian.

A year in history that haunts the memory of another people, who also saw the beginning of the loss of their heartland, was in 70 AD. It was in that terrible year that the Roman general and future emperor, Titus, finally came with overwhelming force against the people of Judea and the Jewish capital city, Jerusalem.

Suffering decades of appalling persecution and brutality from Roman legions and from procurators such as Rufus, Gratus and Pilate, the Jews finally in desperation rose up against the occupation of their ancient land. At first the heroic Jewish warriors won great victories. But the superpower of its day, the Roman Empire, sent legion after legion to relentlessly grind down Jewish resistance.

Jerusalem, was finally besieged by Titus and his forces. Jerusalem and the Second Temple was destroyed after a frightful siege in which hundreds of thousands of Jews died of disease, hunger, and the sword. Eliezer, one of the leaders of the resistance managed to escape with his followers and their families to the immense rock of Masada that overlooks the Dead Sea.

There, high upon the mountain that had been a winter palace of King Herod, the 960 Jewish men, women and children held out for three years. But in the end, with the Romans closing in, Eliezer called them together and asked them if they should surrender. Rather than be enslaved or crucified they took their lives.

Before that they had witnessed some one hundred thousand Jewish resistors crucified by the Romans in an immense and ghastly forest of crosses surrounding Jerusalem. In this, the verdant and ancient forests of Judea, Samaria and the Galilee had been cut down turning the once fertile land into what would become for following centuries a neglected wasteland.

It was later in 133 AD that the Second Jewish Revolt against continuing Roman depredations and occupation occurred, which finally led to Emperor Hadrian destroying what was left of the Jewish nation three years later and, in a frightful insult to the Jewish survivors, renaming their Jewish homeland, Palestina, after the hated and now long extinct Biblical enemies of the Jews: the Philistines.

Centuries pass, but history has an almost supernatural way of repeating itself. Fast forward to the twentieth and twenty first centuries and both Serbia and the Jewish homeland are linked by eerie circumstances. Both are often falsely demonized by the mainstream media and both have suffered relentless Islamic aggression.

The late 20th centurys insane rush to create Kosovo as yet another Muslim autonomous region in the heart of the Balkans, was a testament to the curse of oil. Ever ready to enrich their economies, the Europeans and, sadly, the Clinton Administration combined to appease and placate the oil rich Arab and Muslim kings, emirs, imams, mullahs and assorted dictators.

During the late 1990s when Democrat President Clinton and his Secretary of State, Madeline Albright, launched a disgraceful war against the Serbs, the Serbian Deputy Prime Minister Draskovitch said of Kosovo: Our faith was born there, as was our language, our nationhood, our pride. It is incumbent upon us to defend Kosovo, even if we all die.

His words were uttered as American bombers, repainted in NATO colors, bombed Serbia for several months allegedly inflicting some 3,000 civilian deaths and destroying all the bridges over the Danube River in Belgrade. This was not Americas finest hour, but it is now dead and buried by the left wing mainstream media. The same mainstream media rarely, if ever, tells us about Serbias passion during that shameful act by the West. When Serbia was part of Yugoslavia, it was the Serbs who fought alone and unaided against the German divisions and their fascist allies during World War 2; fighting them to a standstill. No other small nation which fought alone in occupied Europe achieved that remarkable and heroic feat.

Kosovo was partially restored to Serbia but it was not to be for long. Judea and Samaria was liberated by Israel in its defensive 1967 Six Day War, but much of the world brings terrible pressure upon the Jewish state to abandon its very Biblical and ancestral heartland to a terrorist and Islamic entity to be called Palestine  a state that has never existed in all of recorded history.

Islamic influence grows with every passing day. Facts are being created on the ground, which are changing the demographics and national characteristics of many western European states. And it was in the Balkans that Arab oil drove the creation of a Muslim statelet: Kosovo.

For the Serbian people, the province of Kosovo is their very ancestral heartland just as Judea and Samaria (the so-called West Bank) is the Jewish ancestral and Biblical heartland. As Serbian President President Vucic recently wrote:

To be sure, Serbia will never forget our joint suffering, especially the 500,000 Serbs and 30,000 Jews murdered in specifically sadistic ways by the Croation Ustasha fascists in extermination camps like Jasenovac or its own suffering, such as the permanent eradication of 200,000 Serbs from Kosovo and ethnic cleansing of 250,000 from Croatia in the 1990s, only a fraction of whom have returned to their homes.

Although Serbs living in enclaves within Kosovo are still holding on from being completely driven from their homes, the price for Israel of enduring a fraudulent Muslim Palestinian state would be the expulsion – the ethnic cleansing – of Jews from Judea, Samaria and parts of Jerusalem. This potential outrage was happily endorsed by President Barack Hussein Obama, by the ever appeasing European Union and the immoral United Nations under cover of the misnamed land for peace in which Israel gave away its land, but never received peace. Jordan is historically in possession of nearly 80% of Mandatory Palestine and its population is over 75% Palestinian. There already thus exists a de facto Palestine presently called Jordan.

Serbia and Israel should be supported by all who still cherish Judeo-Christian morality over political and economic expediency. Historical correctness must surpass the so-called political correctness so beloved by the Left. Neither nation deserves to become victim to the demands of Western appeasers or to Islamic theocracies.

The failure to withstand supremacist Islam is dhimmitude or death.

Victor Sharpe is a prolific freelance writer and author of several books including his acclaimed four volume work, Politicide, which details the 1,400 year old Islamic threats to Judeo-Christian civilization.

September 24, 2020
Serbia and Israel: The triumphs and tragedies of two nations