June 14, 2019
Americans often think they can do nothing about abortion, in the belief that "Roe v. Wade is the law of the land." This presumption is based on a misunderstanding of the judiciary's role in our constitutional republic. Much of that misunderstanding stems from a revisionist reading of the 1803 case Marbury v. Madison.

Modern rulings and textbooks often quote just one line from Marbury, written by Chief Justice John Marshall, to elevate the judiciary above the other branches of government: "It is emphatically the duty of the Judicial Department to say what the law is." Upon this statement hangs what we call "judicial review." Taken out of context, this one sentence in Marbury supposedly makes the Supreme Court the final arbiter of the U.S. Constitution – confining every officer of government to the Supreme Court's interpretation, rather than to the Constitution's actual text and meaning. This unconstitutional doctrine is known as judicial supremacy. 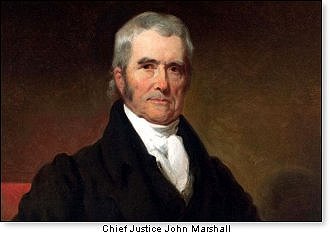 Judicial supremacists claim the Court has the exclusive, final right to interpret the Constitution for the other branches of government. But this notion does not reflect a fair reading of Marbury. Hardly a person of tyrannical bent, Chief Justice Marshall was a patriot who served as George Washington's chief legal officer at Valley Forge. Certainly he was aware of the purpose of the American Revolution: to gain independence from arbitrary, dictatorial rule, and to protect the unalienable rights of the people by the establishment of a self-governing republic.

As a young soldier, Marshall was dedicated to the cause and aligned with its key figures. His father was a personal friend of George Washington, and his mother was a second cousin of Thomas Jefferson. Later elected to the ratification convention in Virginia, Marshall worked with James Madison to bring about the adoption of the new U.S. Constitution.

To that document, Marshall remained loyal his entire career as a lawyer, congressman, presidential adviser, diplomat, Washington biographer, Secretary of State, and Supreme Court justice. A leader in the Federalist Party, Marshall was a staunch federalist, a defender of written constitutions, and a believer that the government of our Union "is, emphatically, and truly, a government of the people." (McCulloch v. Maryland, 1819)

It does not take much reading to find that Marshall did not establish judicial supremacy in Marbury, contrary to popular belief. He knew he lacked the power to impose an extra-constitutional oligarchy, and he had no desire to overthrow America's newly-won republic and institute its opposite. What Marshall affirmed in Marbury was constitutional supremacy. The sum total of this view is expressed in the opinion's closing paragraphs:


Why does a judge swear to discharge his duties agreeably to the Constitution of the United States if that Constitution forms no rule for his government? if it is closed upon him and cannot be inspected by him? If such be the real state of things, this is worse than solemn mockery. To prescribe or to take this oath becomes equally a crime.

It is also not entirely unworthy of observation that, in declaring what shall be the supreme law of the land, the Constitution itself is first mentioned, and not the laws of the United States generally, but those only which shall be made in pursuance of the Constitution, have that rank.

Thus, the particular phraseology of the Constitution of the United States confirms and strengthens the principle, supposed to be essential to all written Constitutions, that a law repugnant to the Constitution is void, and that courts, as well as other departments, are bound by that instrument. (emphasis added)


So, while Marshall began Marbury by implicitly asking "what the law is," he ended Marbury with a decisive answer.

The real takeaway line from Marbury is its conclusion: "that a law repugnant to the Constitution is void, and that courts, as well as other departments, are bound by that instrument" (emphasis added).

Taken in its true light, Marbury is a testament against judicial supremacy. No, Marshall did not "make the Supreme Court supreme," as elitists wish us to believe. If anything, the people made the Court supreme, but only over the lower courts – i.e., "supreme within its sphere of action" (McCulloch) – and yet no matter how confusing its name, the Supreme Court is always inferior to its originators (the people) and to the law of the land (the Constitution). The judiciary is no higher than any other branch of government – indeed, it has been called the least of all – and every department is equally and independently oath-bound to the purposes, limitations, and requirements outlined in the Constitution. Anything attempted outside of this constitutional sphere is "void," to quote Marbury.

Justice Marshall noted that the Constitution draws its legitimacy from "the original and supreme will" of the people – not the judges, not the executives, not the legislatures, not even the states. (See Marbury, as well as McCulloch.)

A key focus in Marbury v. Madison was the fact the Constitution is the people's written document. At least nine times in Marbury, Marshall referred to the written nature of the Constitution to show the document's steadiness and supremacy: "Certainly all those who have framed written Constitutions contemplate them as forming the fundamental and paramount law of the nation" (emphasis added).

Judicial supremacists portray the Constitution as a "living document." What they envision is a constitution in perpetual evolution, where its words change by means of judicial precedent, or, "precedent upon precedent." Such thinking can be traced to the time of Woodrow Wilson, who campaigned for president on the proposition that "constitutions must be Darwinian in structure and in practice." Under this view, the Constitution would be fluid, not solid; elastic, not set; expansive, not limited – and the judiciary would be empowered to arbitrarily rewrite constitutional provisions.

But none of that doctrine is found in Marbury. Rather, John Marshall stressed that the Constitution is "unchangeable by ordinary means," and modified only by the people's "great exertion."

Right there in Marbury, Chief Justice Marshall noted that the difficult process required to change the written Constitution is proof the document is "designed to be permanent." The people are "the authority," the superior authors, with the right of origin over the document, which they created to serve its stated purposes. No simple expression from the legislature (or the executive, or the courts) can modify its language, he said.

As a written document, the Constitution requires an oath – administered upon all who would serve in our government at any level, or in any branch – "to support this Constitution" (Article VI). The judiciary is unique, in that it takes two oaths – one for constitutional fidelity and the other for impartial justice – yet every ordinary officer swears the basic oath to adhere to the Constitution. It was upon the existence of the constitutional oath that Marshall asserted the judiciary's power (and boundaries): "Why does a judge swear to discharge his duties agreeably to the Constitution of the United States if that Constitution forms no rule for his government? if it is closed upon him and cannot be inspected by him?" Marshall called it "a crime" to impose an oath that oath-takers are expected to violate: "How immoral to impose it on them if they were to be used as the instruments, and the knowing instruments, for violating what they swear to support!"

The same reasoning would naturally apply to all officers who take the constitutional oath.

By a proper reading of the opinion, Marbury really makes the case that every officer of government is bound by oath to apply the Constitution – not as interpreted by others, but as directed by its written words.

We should realize that such a doctrine would make the Supreme Court into the "supreme branch of government": an entity self-empowered to modify the Constitution at will. Under such despotism, we would have no more rule of law, only the rule of arbitrary human will – the mark of an all-powerful monarchy or oligarchy.

But Marbury states the opposite. Marshall bent over backwards to assert that the U.S. Constitution is the supreme law of the land, that it cannot be changed except by the people, and that it is binding upon all oath-takers, including the judges.

Judicial supremacy is made all the more absurd by Federalist 78, where Alexander Hamilton described the judiciary as "beyond comparison the weakest of the three departments of power." The courts, he said, "can take no active resolution whatever." All the judiciary can do is adjudicate particular cases, he said, and even then, the near-powerless judiciary "must ultimately depend upon the aid of the executive arm even for the efficacy of its judgments." 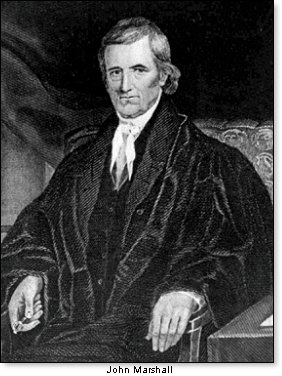 In 1832, President Andrew Jackson disagreed with the result of Marshall's earlier ruling in McCulloch (1819), that upheld the constitutionality of a national bank. Jackson rejected the claim that he was bound to the court's precedent. "Mere precedent is a dangerous source of authority," President Jackson declared to Congress. "[T]he opinion of the Supreme court ... ought not to control the co-ordinate authorities of this Government. The Congress, the executive and the court, must each for itself be guided by its own opinion of the Constitution. Each public officer, who takes an oath to support the Constitution, swears that he will support it as he understands it, and not as it is understood by others." (Andrew Jackson, speech on the national bank, July 10, 1832)

Marshall and Jackson may have disagreed on the constitutionality of a national bank, but their disagreement gave us a real-world example of constitutional supremacy in principle: where each branch is obligated to interpret the Constitution in its own sphere, as independent servants of the law and of the people.

Our generation has been duped into believing that our elected officials must obey the courts, rather than read and apply the actual Constitution. Andrew Jackson could have bowed to court precedent and said, "McCulloch made me do it," and thereby violated his oath and conscience. Instead, he stood by the interpretation he believed was correct.

Americans need to remember basic civics: our system is supposed to be one of checks and balances. As Thomas Jefferson explained, "Each department is truly independent of the others, and has an equal right to decide for itself what is the meaning of the constitution."

Some might accuse Jefferson of fostering a "constitutional crisis" by his encouragement to disregard the courts when necessary. But such institutional independence is healthy, and, in fact, is part of our constitutional republic's original design. The true crisis lies in unchecked power in any department of government.

The danger of an unfettered judiciary should be too obvious to even need mentioning: where the courts are the ultimate controllers over the meaning of the Constitution, there might as well be no Constitution. Each new docket, then, is just another opportunity to trample our rights.

Abraham Lincoln addressed this danger in his First Inaugural Address (March 4, 1861): "[I]f the policy of the government...is to be irrevocably fixed by decisions of the Supreme Court...the people will have ceased to be their own rulers, having, to that extent, practically resigned their government into the hands of that eminent tribunal."

So what is the answer to reining in a usurping judiciary? It's simple. Americans must reclaim their rightful role as their own rulers. We must demand that those we elect keep their solemn, binding oaths to support and defend our Constitution, as written, in spite of overreaching judicial opinions.

Remember, all those we elect are our public servants: our employees. They are called to serve us under our written Constitution, and not to act as mere pawns to our inferior creation, the "supreme" court.