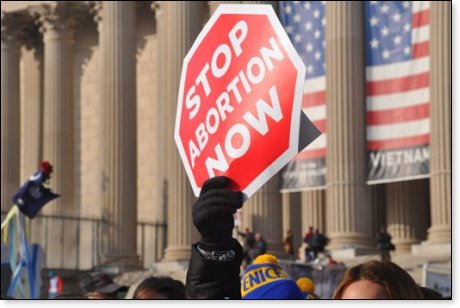 Hundreds of members of Congress started the new year with an amicus brief urging the Supreme Court to "provide clarity" on abortion.

Anyone looking for a solid refutation of Roe would be disappointed. The brief makes no mention of the urgent duty to save the thousands of children lost to abortion daily. Nowhere is the Constitution's equal protection requirement invoked. Nowhere is any advocacy made for the unborn child and his right to life.

Instead, the brief calls upon the Court to revisit its "undue burden" standard in Planned Parenthood v. Casey (1992), and to possibly "overrule" abortion precedent "if appropriate." It criticizes "the 'right to abortion' found in Roe v. Wade," but only for its "haphazard" application.

The brief is all about defending state regulations on clean clinics and competency in those hired to kill a child. We see a long apologetic for regulations designed to kill the child with sterility and efficiency, under the guise of the duty of governments to "safeguard the lives and health of their citizens." The use of the word "citizens" is an example of lawyerly fine print: it leaves out unborn children, who are not constitutionally considered official citizens until birth (a fact that has no bearing on the right to life).

To stop wasting everyone's time, and to play a valuable part in ending the eugenic war against America's most vulnerable children, the brief should have argued that the Fourteenth Amendment requires that "No State shall . . . deprive any person of life . . . without due process of law; nor deny to any person within its jurisdiction the equal protection of the laws." These protections are required by the Amendment without regard to birth or citizenship status.

The brief should have stated that "person" is defined by the opening paragraph of the U.S. Constitution: "We the people of the United States, in order to form a more perfect union, establish justice, insure domestic tranquility, provide for the common defense, promote the general welfare, and secure the blessings of liberty to ourselves and our posterity, do ordain and establish this Constitution for the United States of America." (Emphasis added)

No interpretation of the Constitution is valid contrary to these written purposes. Our Constitution plainly regards our "posterity" (a word that includes unborn children) as equal to ourselves.

Although the amicus brief suggests a timid review of Roe, the lack of moral logic in this request leads to an immoral result. For, if no one will assert the child's right to life, the only refining to be done to Roe is to make abortion more accessible, less regulated, and to further elevate the mother as we dehumanize her child.

Down this road, we find ourselves stuck at the dead end that has pitted America against itself for half a century. Without equal protection, there is no protection. Without the right to life, there are no rights. Without security for posterity, there is no future for America.

To get out of this destructive rut, we must boldly assert that protecting children is always the only "appropriate" route. And we must be clear that arguing for the sterile killing of babies is always inappropriate, immoral, and unconstitutional.