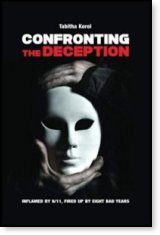 Since 9/11, writes Tabitha Korol in her riveting book, "Confronting The Deception: Inflamed by 9/11, fired up by eight bad years," the United States, Israel, and cultures that still value our freedoms have been fighting a battle of survival on several fronts.

The primary battle, Korol explains, is with the ideology born out of the Islamic attempt to claim Ground Zero as its Caliphate – and from there, literally to conquer the United States of America.

The religious-political-supremacist system of Islam was invented in the seventh century and has since led a relentless drive to take over the world, establish a caliphate ruled by Shariah Law – the law that mandates cutting off the clitorises of five-year-old girls, throwing homosexuals off roofs to their deaths, engaging in "honor killings" of teenage girls whose behavior they disapprove of, and killing all Jews. That sharia law.

It is no surprise that this megalomaniacal goal has captured the imagination of leftists worldwide, including in our country, who share Islam's goals, particularly of destroying America – the "Big Satan" – and Israel, the "Little Satan."

This is a battle being fueled by the Shadow Government of the United States of America, specifically those forces – many from the Muslim Brotherhood – that have been implanted in the highest reaches of our government – including Homeland Security, the Defense Department, the State Department, even the Oval Office – by the Obama regime, many of whom remain quite stealthily in their positions today.

A second battle is with a seriously deceptive and leftwing worldwide media that overwhelmingly support, defend, and clearly identify with all entities they consider "victims" – women, blacks, Hispanics, and Muslims – and studiously hide the truths about Islam's ongoing invasion into our own country, as well as countries throughout the world. Together, they represent the Red/Green Axis – Communism and Islam.

A third battle is with our complicit school systems, which continue to fill our children's heads with relentless propaganda about Islam that is purveyed through the extreme bias of books published by Pearson Publishing Co.

This undisguised, even brazen, support purposely conceals the consequent tectonic changes in the intruded societies, including rampant crime, rape, no-go zones, and blatant threats to the powers-that-be that any consequences will be met with further violence. The result is that all countries to which this is happening – America included – routinely have their analyses and discussions of this threat suppressed.

Korol's exquisite talent is in persuasively refuting the lies and propaganda that are spreading like wildfire throughout the world – and in alerting all of us to the mortal dangers we face if we continue to put our heads in the sand and fail to take action against this galloping threat.

In addition to being an exhaustive examination of this urgent issue – including 822 footnotes – Korol's book is remarkably accessible and provides the reader with all the crucial information necessary to discuss this threat with credibility, refute the biased information with authority, and mobilize efforts to purge our nation of this Fifth Column menace.

Definitely rush to buy this important book on Amazon.com.