At the virtual Democrat National Convention last weekwhere at least two caucus meetings began with recitations of the Pledge of Allegiance without the words "under God"the public was treated to tasteless and remarkably unfunny jokes from Hollywoods Julia Louis-Dreyfus, and a video featuring Donna Hylton, who spent 27 years in prison for her involvement in the grisly murder and torture of Thomas Vigliarolo, a NY businessman found stuffed inside a steamer trunk and left to rot in Harlem.

Then there was Michelle Obama telling Americans to "go high" after her husband tried to destroy candidate and then President Trump by weaponizing all of our intelligence agencies against him. Ironically, this is the same woman who proved that you cant go any lower than the sentiment she expressed at the age of 44 that she was never proud to be an American until her husband was nominated to the U.S. presidency. Imagine, this Princeton and Harvard Law graduate lived almost five decades having to tolerate the bitter taste of American citizenship. And to prove plus ça change, her speech demonstrated that the bitterness bitterly lingers on.

REPRESENTING THE RELIGION OF PEACE

Then there was speaker Noman Hussain, an Imam affiliated with the Texas-based Qalam Institute, which advocates for the use of female sex slaves, the killing of adulterers, and the incitement of hatred against Jews. Hussain was one of the religious leaders who took part in the Dems' Interfaith Welcome Service.

Americans also got to see what one pundit called the Partys moral compassBill Clintonwhose speech was preceded by media release of a photo showing one of Jeffery Epsteins accusers giving the former president a shoulder massage. 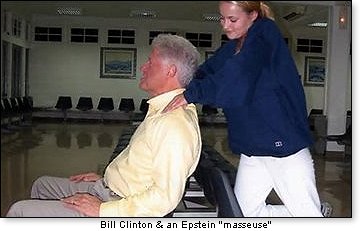 Journalist Matt Vespa offered this critique: [Clinton's speech] was a rather flat repudiation [of Trump] if anything. Bill just doesnt have the mojo to deliver the heavy hits anymore. He looked tired. [He] did this as a Party favor. But unlike his succubus wife, [he] has political skills. He is personable. He is likable. Hes framed Joe as the anti-Trump[but] its not enough to win. Romney was the anti-Obama. John Kerry was the anti-Bush. Both guys lost.

HE WAS IN VIETNAM, YOU KNOW 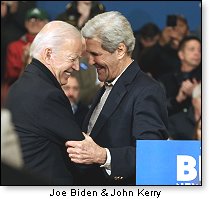 Speaking of Kerry, it took approximately 20 seconds for the former Secretary of State to drop the first flagrant liewhen he claimed that the Obama administrations so-called Iran deal had eliminated the threat of an Iran with a nuclear weapon, wrote journalist David Harsanyi.

And who can forget the oleaginous governor of New York, Andrew Cuomo, who presented himself, according to Jake Lahut of BusinessInsider.com, as a standard-bearer for the nation's fight against the pandemic, calling for a better federal response than the Trump administration's, which Cuomo called too sluggish.

Thats really funny, coming from the guy who desperately called on the president because of his own failure to order ventilators, which the president delivered in record time. Cuomo is also the guy who in a state of hysteria told the president he didnt have enough beds and the president sent two massive, medically-outfitted ships and set up other medical facilities in world-class time, only to learn that Cuomo didnt know what he was talking aboutno additional ventilators or beds were needed!

Sobieski says Cuomos distortions and invented facts and vilification of President Trump are all obscene lies. He cites New York Post columnist Miranda Devine, who recently noted that Cuomo was still sending COVID patients into nursing homes, not only failing to protect the most vulnerable but deliberately putting them at risk. 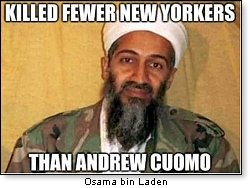 And to top it off was the candidate himself, who was proud to admit that his daughter is so enamored of the recently indicted rap singer Cardi B that he agreed to an interview with her, but mercifully did not play her filthy newest hit, WAP.

Ole Joe got through his speech creditably, notwithstanding the disturbingly vacant look in his eyes. 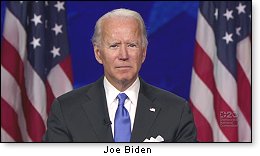 But oh no! Say it aint so, Joe! As journalist Breck Dumas reported, even during the broadcast of Bidens acceptance speech, a Twitter storm was accusing Biden of lifting the words of departed liberal Canadian politician Jack Layton, who passed away in 2011comparing the parting words of Biden's speech to the final words of Jack Layton's farewell letter before his death."

Of course, Biden has been accurately accused of plagiarism for decades. But in this case, we can only conclude that his handlers and writers are plagiarists too.

The convention even had fireworks. Only one thing was missing. In the entire event, there was not ONE WORD mentioned of the months-long violence taking place in Democrat-run cities throughout our countrythe short list includes Portland, Seattle, Chicago, Atlanta, Minneapolis, Baltimore, New York Cityand the massive destruction wrought by the communist group Black Lives Matter (BLM) and Antifa: widespread arson, massive destruction of property, including historic statues and local white and black businesses, wanton attacks on innocent people, intimidation and harassment, and so on.

And not ONE WORD about the actions of the emboldened BLM and Antifa thugs as they marched into the suburbs of Seattle and demanded that those over-privileged, capitalist, bad bad bad white people give their homes to Black people.

Why? Because as you can see by the behavior of the mayors who run those cities, its perfectly okay with them as long as they serve the big picture goal of the Democrat Partyi.e., to have things get so bad that there is no choice but to turn to Big Government to intervene, take over, and run all of our lives from cradle to grave.

That is why your vote in November is really between Communism and Freedom! 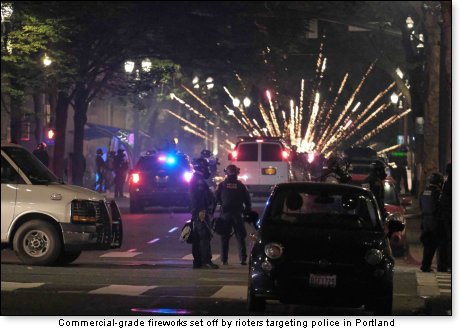