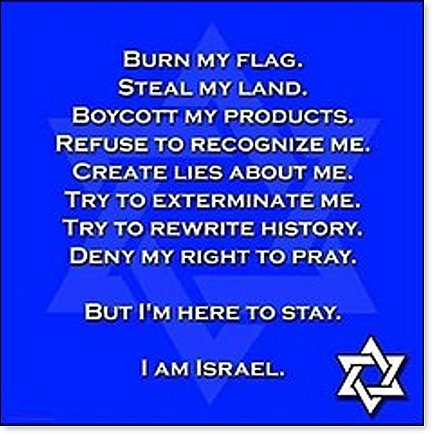 "If we don’t step up to end the imperialist project that’s called Israel, we’re doomed," proclaimed one of three co-founders of Black Lives Matter, Patrisse Cullors. She also supports the Boycott-Divest-Sanction (BDS) movement that seeks to strangle Israel economically.

The tiny red sliver below is what threatens Cullors and her ilk: 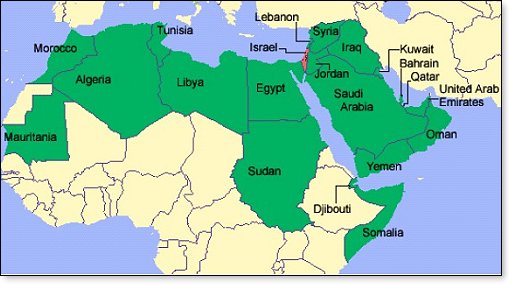 Jews like me have seen this rage all our lives––this pitiful, largely impotent rage, as if a cabal of slogan-driven, hate-fueled faux revolutionaries is even remotely capable of destroying or even diminishing the Jewish people. But they keep trying. Here is what they all feel:

In fact, she feels as bad and angry and as obsessed with hatred as…who else in American history?

After the Republican President Abraham Lincoln enacted The Emancipation Proclamation in 1863, freeing Negro slaves from the servitude and humiliation they were forced to endure in America, the Democrats took action by creating the Ku Klux Klan in 1865 with the intention of hunting, hurting, and hanging the former slaves with homemade nooses. 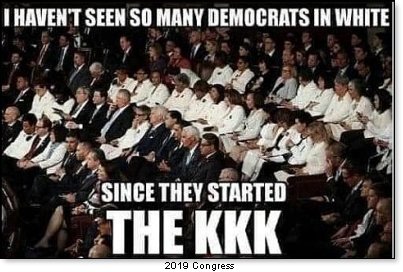 Among them was Senator Robert Byrd (D-WV), who died in 2010, and was "lavishly eulogized by President Obama and former President Bill Clinton.” Hillary Clinton called the vicious racist Byrd her “mentor.”

Byrd, who unself-consciously used the "n" word several times on national TV, rose to the status of Grand Kleagle and Exalted Cyclops in the KKK. Were those titles like notches in a cowboy’s belt, only these denoting the numbers of Negroes he was responsible for killing? He was very proud of recruiting 150 of his friends and associates to create a new chapter of the Ku Klux Klan in Sophia, West Virginia.

D’Souza also writes that “progressives like Margaret Sanger—founder of Planned Parenthood and a role model for Hillary Clinton—supported such causes as eugenics and social Darwinism [and] backed forced sterilization for ‘unfit’ people.… [H]er Negro Project was specifically focused on reducing the black population.”

And writer Kimberly Bloom Jackson, in her blockbuster article The Secret Racist History of the Democratic Party, reinforces this dishonorable history: “There’s even a thirteen-volume set of Congressional investigations dating from 1872 detailing the Klan’s connection to the Democratic Party.”

In the vote for the Thirteenth Amendment to the Constitution, which abolished slavery in 1865––of the 118 Republicans in Congress (House and Senate) at the time, all 118 voted in favor of the legislation, while only 19 of 82 Democrats voted likewise,” Jackson added. “Then there’s the Fourteenth and Fifteenth Amendments guaranteeing rights of citizenship and voting to black males. Not a single Democrat voted in favor of either Amendment.”

You can bet that 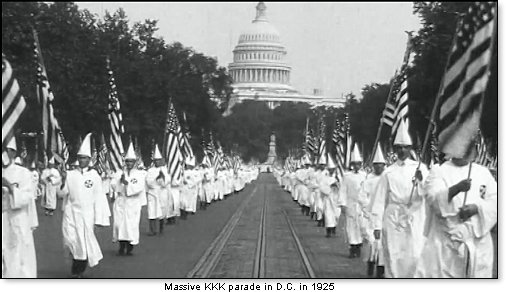 Yet there is a profound difference between the rage of Patrisse Cullors and the wrath of the KKK Klansmen.

Her own and her fellow travelers’ rage is fueled by the notion that those big bad Jews are superior to her and other Blacks in their educational achievements, prominence in society, wealth and influence, while members of the KKK believed that the Negroes they targeted were so inferior that they were worthy of extinction.

Right now in Democrat-run America, there is a lot of hatred of white people, all driven, as Gina Aveni points out, by the empirically systemic racism of the Democrat Party, its degenerate and racist history, and its current––pardon the expression––leadership.

Cullors must be pained that the efforts of generations of leftists have failed her community so grievously for decades on end. Yet she clings pitifully to the same failed political party that, no doubt, her parents and grandparents clung to as well, still believing its empty promises, still thinking that its policies will result in a “fair” system, preferably a Communist America, even though that brutal form of government has failed thunderously throughout history.

STICKING TO A FAILED PHILOSOPHY

Clinging mindlessly to her self-proclaimed Marxism, Cullors stubbornly refuses to utilize her energies and her anger in productive ways to target the Democrats who have mal-educated generations of Black children. She knows––according to cold hard facts, objective reports, and empirical data––that their failed attempts at Affirmative Action and their failed attempts at Common Core have left millions of those children illiterate, unemployable, and too often imprisoned.

Yet the rigid ideologue in her prevents Ms. Cullors from embracing the spectacular success of Eva Moskowitz’s Charter Schools in New York City, which since 2006 have succeeded in sending thousands of impoverished, single-parent children––whose role models are drug pushers, prostitutes, and pimps––into highly-esteemed colleges throughout the country based on merit, test scores, accomplishments, and motivation.

In 2020 alone, Black Lives Matter raised $90-million dollars!––money donated by cowardly corporations afraid of massive protests by community organizers and by individuals apparently attracted to the organization’s year-long rampage through American cities all run, not coincidentally, by Democrat mayors.

Apparently, what these donors found irresistible was witnessing about $2 billion in property damage, lethal arson, grand theft, the injuries of more than 240 police officers and destruction of hundreds of police precincts, a record number of mass shootings, upward of 30 murders, and the defacement and vandalizing of synagogues, at which they screamed “F… the Jews and Kill the Police.”

All, ostensibly, to help the lives of Black people who Patrisse Cullors cares about, right?

Well, how utterly inconvenient. Along comes Rashad Turner, who said he quit BLM over the "ugly truth":

“I am living proof that no matter your start in life, quality education is a pathway to success,” Rashad explained. “I want the same success for our children in our communities. That’s why in 2015, I was a founder of Black Lives Matter in St. Paul, MN. I believed the organization stood for exactly what the name implies: Black lives do matter. However, after a year on the inside, I learned they had little concern for rebuilding Black families, and they cared even less about improving the quality of education for students in Minneapolis.”

And now this! It looks like Ms. Patrisse may have, ahem, diverted quite a few of those millions, as Monica Showalter details in depth, including spending “cash on Malibu conferences and spa stays…funneling money to her baby daddy, more than $150,000, and a mansion-buying binge—reportedly in Compton, Georgia; Los Angeles; the Bahamas; and tony Topanga Canyon,” which is predominantly white. 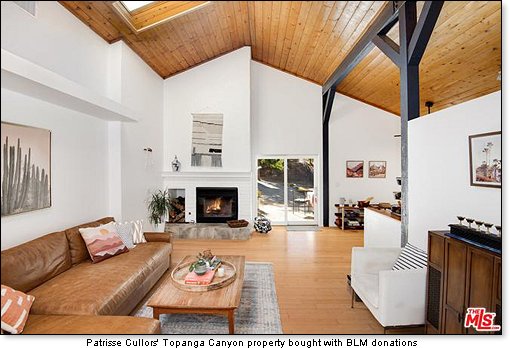 Strange, isn’t it, that this woman who exudes contempt, if not hatred, for white people, would not buy a home in one of the 10 richest black communities in America? Was the venue she chose instead to prove something to whitey, or to assuage her jealousy?

Ultimately, widespread outrage and accusations of theft and fraud––and not an indictment!––finally forced her out of the organization. "If you did nothing wrong, "Why quit!?" one critic exclaimed!

At 37, Ms. Cullors is young…also pretty, famous, and rich. But by any measure, support for BLM has fallen significantly, just as support for the police has risen. This comes as no surprise, given that the American public has watched in horror as cities and homes and businesses just like theirs––again, all overseen by Democrats––have been vandalized, burned to the ground, and robbed, and people just like them have been sucker-punched, smashed in the face, kicked and pummeled, and raped and murdered––all in the name of the phony-baloney construct called social justice. 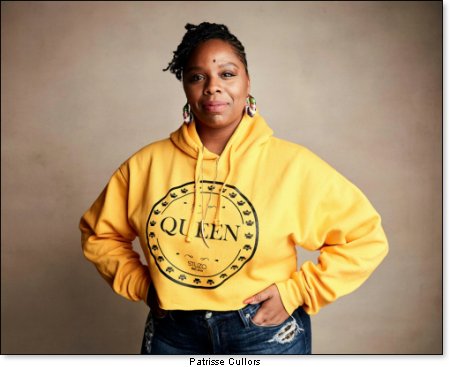 Of course, that hasn’t stopped leftwing cesspools like the UCLA Luskin School of Public Affairs from inviting Ms. Cullors to be their commencement speaker this month, an invitation she accepted.

This prompted the Executive Director of Stop Antisemitism, Liora Rez, to state that “There are currently millions of African slaves in Libya, Qatar and Saudi Arabia and daily slayings of the Igbo people in Nigeria. Rather than addressing these atrocities, Patrisse Cullors and BLM chose to vilify Israel (a nation which proudly boasts a brown and black Jewish majority).…”

But before she tackles the challenges of the racist Arab states, Cullors should address what Parker Beauregard describes as "2021’s stratospheric murder rates in America’s five blackest cities. Blaming the system is a Marxist approach for taking blame off the individual. It is the opposite of the Judeo-Christian philosophy that helped shape the United States from its inception.”

“According to the FBI,” Beauregard adds, “over 90 percent of these murders come at the hands of another Black.” (Read the article for the jaw-dropping breakdown of cities, crimes, and racial makeup.) 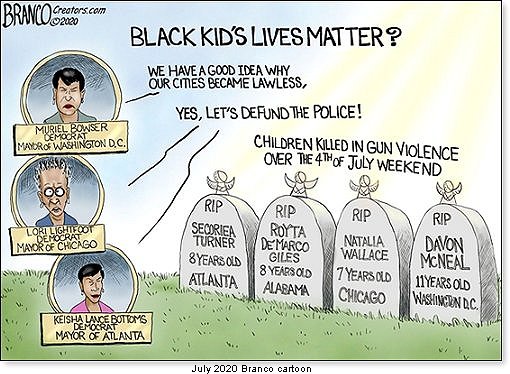 Yoo hoo, Patrisse….it looks like your work is cut out for you! Charity really does begin at home!

“To my Jewish brethren who in their heart of hearts think they are being virtuous,” writes EileenToplansky, “you must understand that the Black Lives Matter movement that so many of you marched for, sent money to, and still support with admiration, has at its core the deep desire to annihilate Jews and destroy Israel.

“It does not matter what denomination of Judaism you belong to or if you even believe in G-d,” Toplansky continues, “but as a thinking being you must begin now to acknowledge that supporting a group that calls for the annihilation of your fellow Jews should go against every fiber of your moral compass.

“American Jews,” she beseeches, “where is your indignation….?”

Unfortunately, I know the answer to this impassioned question, and it’s not pretty.

American Jews have been spoiled by the unlimited freedom they’ve enjoyed, thanks to our country’s Founding Fathers. For the first time in Jewish history, they’ve had the ability to redress grievances through the rule of law, to go outside their once-threatened circle to mix comfortably with all ethnic and political and religious groups, and to abandon the demands of a religion that survived thousands of years of relentless persecution. Of course, that persecution is aflame today, but leftist Jews think that their assimilation confers some kind of magical immunity on them.

They believe that they are unlike the Jews who suffered through––and survived!––over 3,500 years of persecution:

Yet here we Jews are again, besieged but unbowed, harassed but not intimidated, and yet still the targets of people and groups like Black Lives Matter who should be emulating us instead of displaying their psychotic––and therefore bellicose––jealousy.

But guess what? When all the enemies of the Jewish people––like BLM, Antifa, the Obamas, the Biden regime, et al.––have written their own flowery, self-aggrandizing, narcissistic eulogies, Israel will still be here, Jews will have increased their numbers, and other jealous anti-Semites like Cullors will still be trying––and failing––to destroy us.