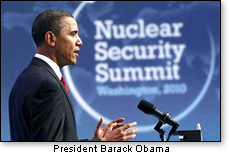 Don't take our word for it. The president has said in his Posture statement that we will not use nuclear weaponry against any non-nuclear nation that attacks us, even if the attack is in the form of chemical and biological weapons. That plan applies with the proviso that the attacking nation is a signatory to the longstanding Nuclear Proliferation Treaty (NPT). So where does that leave us? Even Hillary Clinton had some difficulty trying to figure out what options remain for us.

There could be thousands  maybe hundreds of thousands  literally dropping dead on the streets of New York or Los Angeles as a result of germ warfare inflicted by terrorists acting on behalf of a non-nuclear America-hating terrorist state. How then does America strike back? Do we resort in kind  i.e., chem/bio warfare? No, that violates several long-standing international treaties to which America has agreed. America does not vilolate its treaties. Many other nations may do so, and that's OK with the "one world" establishment. But we don't. Nuclear weapons? No, the president has just ruled that out.

So what's left? Sending young Americans into the meat-grinding battlefield of conventional warfare? And what will be the ground rules there? America (again) fights with one hand tied behind its back...the old Korea/Vietnam redux?

It won't matter if we're attacked by germ warfare or a disabling of our power grid (cutting off food and water supplies), or simultaneous violent attacks on our cities by terrorists with connections to states seen as "non-nuclear." Under START/NPR we would more likely be helpless to respond under the Obama doctrine.

In our previous column on this issue (see Part 1  4/12/10), Frank Gaffney  President of the Center for Security Policy  outlined disadvantages to the U.S. of the START-2 treaty and NPR (Nuclear Posture Review):

1  Further deep cuts in our nuclear deterrent when the rest of the world is building up its own arsenals.

2  The treaty does not consider Red China  whose missiles are pointed at us.

3  The treaty ignores "the thousands of nuclear weapons Russians have" that are the size of bombs that hit Hiroshima.

4  There is no indication as to how the treaty would be verified.

Mr. Gaffney tells us in our interview that what the president has asserted "in the interest of advancing a theory of arms control that is arcane and totally unrealistic [is] mainly what are called 'negative security guarantees' [what we won't do if attacked] that they [the Obama White House] think will influence the behavior of people who basically have nothing but contempt for international laws in general and arms control in particular. [Mr. Obama] is dramatically reducing the deterrence we are posing to folks who are thinking about attacking this country  in chemical weapons, with biological viruses, or with cyber attacks. I think [it] will be appalling to the American people as they learn more about this."

Yet another unknown (concern #5)

Here is Number 5 on Gaffney's list of disadvantages to the U.S. of the Obama nuclear policy: How do we  in 2010  really know which nations are "non-nuclear?"

Paula DeSutter  a veteran arms control verification official in both the legislative and executive branches of government  told Gaffney on his radio show that the problem is "not countries that are in compliance [with the Nuclear Non-Proliferation treaty  NPT]." Rather the difficulty lies with "countries that we have not yet found to be compliant. They could be non-compliant, but reaching compliance judgments of the NPT is a particularly difficult thing to do." Ms. DeSutter's view is that this particular section of the president's Posture policy should be entitled 'Making the World Safe for Biological Weapons."

Gaffney's further concern  Number 6  is that "lawyers will determine whether we can use weapons of retaliation." And not just "our lawyers," he adds. Lawyers for the International Atomic Energy Agency (IAEA) would likely weigh in with an opinion in such an emergency situation." All of this," he adds, "creates profound new vulnerabilities unnecessarily in a reckless way."

In fact, Bill Gertz, in his Washington Times column In the Ring, reports on the e-mail interview he had with Keith B. Payne, like Gaffney a former Pentagon official and weapons expert. Not only does Payne confirm the IAEA's likely involvement in whether we are allowed to strike back once we have been attacked, but he adds that the IAEA's 35-member board of governors includes Imperial Russia, Red china, Chavez's Venezuela, and Castro's Cuba. Also an unreliable Mongolia. They would be in a position someday to have input as to whether we can strike back in our own defense.

Who knows, for example, how many arms China can twist among its fellow IAEA board members when that fateful decision day arrives that we have tried to avoid for the last 65 years  whether to pull the nuclear trigger? Or would Beijing decide this is the time to stifle a U.S. response by threatening to destroy our economy by calling in its chips on America's debt that the giant Communist nation holds? Add to that the Chinese nuclear capabilities and you have a situation that could very conceivably put us at a serious disadvantage in the showdown.

A trap laid for the future?

The Wall Street Journal caught a high official of the Obama administration in a contradiction on the treaty's exact wording.

As the Prague pact was about to be inked, State Department negotiator Ellen Tauscher said that "there are no constraints to missile defense in the START treaty."

By the time Ms. Tauscher appeared before a congressional panel this past week, however, she apparently had been warned by one of her administration colleagues that the statement needed to be revised. At that point, she told the lawmakers, "The treaty does not contain any constraints on testing, development of current or planned U.S. missile defense programs." In other words, President Obama may not have such plans now, but what about a future president? He may face different circumstances, and yet  by her carefully updated interpretation, Tauscher acknowledges that a future commander-in-chief may have his hands tied. Thus we will mark that as this column's own concern No. 7  added to Gaffney's 6 referenced above.

There are other problems with the wording of this treaty (START) and the president's own policy goals (NPR) that go to the underlying thrust of where Mr. Obama is taking America regarding its position of strength (or lack thereof) in a dangerous world.

We will have plenty of time to revisit the issue. A treaty requires a two-thirds vote in the Senate  67 votes (some in the media say 68, but my math says 67 votes would meet a two-thirds threshold of the Senate's 100 members). In the meantime, this should be an issue in the fall for those senators or senatorial candidates (perhaps in your state) seeking your vote. It will likely be up for Senate ratification next year.

Ronald Reagan prayed for and spent a good deal of time concerning himself with a goal of a world without nuclear weapons. So some of Barack Obama's apologists disingenuously argue  in so many words  Hey, what's the problem? Obama is just trying to carry out Reagan's wishes of that same "world without nuclear weapons." Of course the difference is that Reagan understood that in order to achieve that goal, America would have to a) remain strong 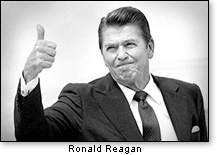 and b) draw down our own weaponry only when we have airtight verification that others have done or are doing likewise and in good faith, and in any event, c) maintain a strong defense against a missile attack in the form of the Strategic Defense Initiative. On all three counts, President Obama is taking us in the exact opposite direction. He appears to be of the school of thought that argues for a unilateral drawdown in the belief that others will follow our example. History does not support that fond wish.

Frank Gaffney points out that "rogue states" with loose ties to terrorism are acquiring more attack capabilities (read Iran and North Korea) and whose "collaboration extends to those [chemical/biological] weapons as well." The longtime defense expert adds, "Why would we want to signal in any way, shape, or form [any] indifference to such dangers?" Why, indeed.