August 16, 2010
Maybe we should have the right to elect (or defeat) the faceless bureaucrats who presume the right to dominate our lives. Why not? 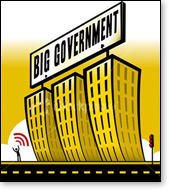 Dr. Angelo M. Codevilla, an international relations professor at Boston University, has challenged the "ruling class" in the U.S.  the segment of our population that presumes to set the limits of what Americans should be told, what issues are to be discussed (and which ones are to be ignored), the cultural tenor of the nation, what we can eat, what we can hear, what we can wear, what we can drive, and  what we can say.

Shortly after Dr. Codevilla's article "America's Ruling Class" appeared in The American Spectator magazine, this column was among the first to publicize it  sporadically, as it applied to specific issues we were taking up at given times over a period of weeks.

The lid is off

Whatever efforts may have been exerted to suppress this brilliant spotlight on the ruling class's effort to frustrate the will of the American people (i.e., the rest of us  or the "country class"), the dam was irrevocably broken later when Rush Limbaugh took the entire three hours of his broadcast to publicize it.

The professor's dissertation is now about to skyrocket to the top of the New York Times bestseller list (my prediction) with the scheduled release of its expanded book version in mid-September (with Rush featured in its preface, according to the Codevilla camp; Michael Barone, eminent historian and chronicler of history in the making, also has endorsed the work).

Comeuppance for the uppity?

In an interview with this column, Dr. Codevilla makes it clear that  no, he does not merely wring his hands at the very problem of "America's Ruling Class" (a thumbnail sketch described below), he has ideas on how to put our "betters" in their place.

Basically, here's what the professor would say to the arrogant, faceless bureaucrats with ipso facto quasi-legislative or quasi-judicial powers as to how the rest of us are to live our lives: Let the voters decide whether you get to keep your job.

How delightfully delicious! In other words (and this is my wording, not Dr. Codevilla's), he would (figuratively) drag these little potentates by the scruff of their necks and say okay, so you want to run our lives? Where in the Constitution do you presume to have that power? The Founding Fathers meant to rest such responsibilities in the hands of the people  "We the People," if you will. Ergo, you should stand for election to your exalted position.

Note: Codevilla would not make cabinet positions elective because they are "the arms and legs" of the president's administration; only the positions in "quasi-legislative" or "quasi-judicial" bureaucratic agencies (supposedly not under direct presidential control) would go from being appointive to elective.

For now  to cite just one example  we have the Federal Communications Commission (FCC), whose 3-2 Democrat majority wants to extend the tentacles of government control to the Internet, and for that matter much of the other media. (See this column "Government Control the Internet? Oh, no you don't"  7/12/10.)

Would it not be illuminating to have campaigns where the three power-mad FCC commissioners could face the wrath of the voters not amused at the plan to shut up their favorite websites or radio/TV talk-show hosts? How about a good televised debate where the opposition candidates get to raise questions as to Hitlerian tactics planned in the interest of cramming down our throats government-approved "news" that the great unwashed ought to want?

A government propaganda ministry? Sorry, Jack. You're not my candidate.

Or how about going to President Obama's EPA Administrator Lisa Jackson, and saying "What? You're going to do what? Issue an "endangerment" finding  citing a carbon "threat" not founded in provable fact  so you can cause my electricity bills to "skyrocket" (as Obama acknowledged)? Over my dead body, you will! I'm a voter and  what did you say your name is?

What? You're going to force me, with my bad back, to bend over and shove my laundry into the washing machine through an opening near the bottom instead of inserting it from a standing position at the top? What? You're going to mandate the allowable volume of my shower water? What? You've saddled me with one of those good-for-nothing Al Gore toilets that require two flushes in the interest of "conserving" water?

And wouldn't we have a field day with the Pooh-Bahs of the mighty allegedly "non-political" Federal Reserve Board? (What? You want to hold secret meetings in secret places where with the stroke of a pen you decide my economic future?) In our interview, Codevilla ventured to say, "Yes, it would be nice to know who these people are and what they think. After all, presidents have their reasons for choosing them. Who's to say these [reasons] are not political?"

What? The Gestapo-like antics of OSHA (Occupational Safety and Health Standards Administration) are okay? And you say you want me to go into the voting booth and give you the green light on that?

These agencies supposedly "serve the public." But as Codevilla says in our interview  "By what right? To serve whom? Who says what they're going to do? Who can object? And how can we object except that we elect those people?"

Angelo Codevilla's forthcoming book will pinpoint how we  the country class  can deal with "The Ruling Class"  government regulators, academia, media, entertainment (Hollywood), the elites who profit from government contracts and regulations, professional activists  i.e. (my wording), the fat bums who draw down stratospheric salaries for leaning on government to control our lives, etc.

The ruling class attitude is "We are the best and brightest, while the rest of Americans are retrograde, racist, and dysfunctional unless properly constrained"  or as Lincoln defined it, "the old serpent, you work. I'll eat." Barack Obama himself has peered down his snoot at country class people as "clinging to God and guns."

Codevilla traces much of today's ruling class to the attitude of Woodrow Wilson, arguably  in my own view  the worst pre-Obama president in our history.

Wilson was the first president to argue the Founders had done badly by depriving the U.S. government of the power to reshape American society. (Wilson, by the way, was a rabid segregationist).

Codevilla puts it this way: "By taxing and parceling out more than a third of what Americans produce, through regulations that reach into American life, our ruling class is making itself the arbiter of wealth and poverty."

The question that comes to mind is whether the author's proposals will require a constitutional amendment or merely enabling legislation. Either way would require Congressional input. Which raises another question: How to persuade Congress in the professor's direction?

After all, these agency heads often derive their powers from laws that Congress deliberately larded with vague mandates  open to allowing burdensome regulations that a powerful Congressional committee chairman may want, while lacking the political courage to spell it out in plain English. That way, the senator/congressman can leave the dirty work to the unelected bureaucrats.

When his constituents complain, the lawmaker can claim to be "shocked, shocked," then haul the offending agency head before his committee and publicly berate him, while doing nothing to terminate the intrusion into our lives. At the same time, he uses the hearing to rev up campaign contributions from the professional agitators of the ruling class. In the end, if necessary, other ways can be found to do the same dirty work. Everybody wins  except the rest of us  the country class.

All these new elective offices would confront the voter with a long ballot. The professor answers that it would then be incumbent upon us to pay attention.

"Mind you," he adds, "the suggestions that I offer are not panaceas. They depend for their effectiveness on the wisdom and attention span of the American people."

Lots to think about there. And we're not done. Dr. Codevilla also would require the federal judiciary to face the voters. That presents a whole different set of issues. Later.