Wes Vernon
Connecting the dots: the end of America as we know it?

May 2, 2011
Two very horrifying 21st century problems are front and center this week. They are inextricably linked. It is urgent that we deal with one — Obamacare — in part because failure to do so would threaten to exacerbate the second problem — our national debt.

There are other challenges of equal or near equal severity. But these two are especially time-sensitive.

This past week, the International Monetary Fund (IMF) identified a (best-estimate) date — 2016 — at which time Communist China's economy will surpass that of the United States.

As Brett Arends of Market Watch succinctly describes it, that circumstance "provides a painful context for the budget wrangling taking place in Washington right now," and "raises enormous questions about what the international security system is going to look like in a handful of years. And it casts a deepening cloud over both the U.S. dollar and the giant Treasury market."

Even more disconcerting is that so few are prepared for this, notwithstanding the dead-certain ugly ramifications that could materialize rather quickly. China's emerging dominance on the world stage threatens us with the end of our America as we have always assumed her to be.

The IMF report leans heavily on "purchasing power parities" — that is, what we in the U.S. earn and spend in our economy versus what the Chinese spend and earn. Obviously, this does not bode well for our standard of living — a declining purchasing power, possibly exacerbated by shortages in such basics as food and gas.

Speculating on the upshot of this projected end of the "Age of America," T. Calvarese in a piece posted on Yahoo commented, "It's hard to imagine the future of securities in a world where the U.S. Treasury can no longer use as a crutch its special license as the world's top economic power to cushion liability. It continues to operate on the assumption that it will forever be the monetary benchmark. What will it do in the dawning age of China?" 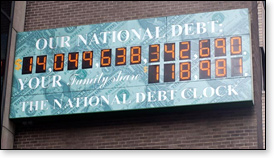 The IMF report adds urgency to the need for meaningful actions — both short and long-term — to confront the nation's debt head-on. One hesitates to invoke the old shopworn "shifting the chairs on the deck of the Titanic," but what would be a less clichéd obscenity than the spectacle of arguing over how much "the top 1 percent" should be required to contribute in taxes to a government that controls printing presses fueled in large part by our indebtedness to the same Chinese who are about to eclipse us? All the political posturing about "rich" vs. "poor" grabs the headlines as the country slips from beneath our very feet.

Much of the media downplayed the IMF report that points to an America whose lowered standard of living, dependent on others to sustain us, could endanger our very security. In a world seething with Communist, Socialist, and Jihadist hatreds of everything America stands for, such dependence translates into a perception of international weakness, rendering us all the more vulnerable to attack.

Mr. Obama has a point when he says he inherited "a mess." But that is irrelevant considering that — according to the administration's own 2012 budget projections — President Obama, by the end of his first term in office, will have accumulated more national debt than all previous presidents — from George Washington to George W. Bush — combined.

The IMF warning — dire as it is — reinforces a case that has been made emphatically in recent months and years — that time is running out for America to save itself from the economic abyss.

The next president of the United States will have the unenviable task of presiding over the end of "the Age of America." If that president is still Barack Obama, he might be comfortable with it, given that he has done everything he can to take us down a peg or two. Meanwhile, the president will trot out only whatever window dressing "solutions" he deems necessary to get him through to re-election. That does not obligate the rest of us to accommodate his timetable.

As Congress returns this week from its Easter break, near the top of the to-do list will be the question of what budget-cutters will get in return for voting to raise the debt ceiling. House Budget Chairman Paul Ryan (R-Wisc.) has authored a comprehensive budget plan — approved by the full House. Its proposed cuts in the trillions serve as a reasonable starting point for negotiation. There are conservatives who have quarrels with some of its particulars, but one has to start somewhere.

The big one for this year

Beyond that, we need to start planning to deal with another elephant in the room — Obamacare. If Congress does not seek to get rid of that, by whatever parliamentary means required, then most of the chatter about reducing the debt is superfluous.

Last year, as the Democrat-controlled Congress passed Obamacare, congressional officialdom acknowledged the program would engender close to $1 trillion in costs. More recent projections indicate $1.4 trillion over the next ten years. Some estimates are higher. Michael Cannon of the CATO Institute has posited a price tag of $6 trillion. That easily links indebtedness and Obamacare as twin headaches.

At the same time, another report — this one a 2010 year-end summary from the Treasury Department — repeatedly stated that Obamacare's projected cuts in future payments to doctors and hospitals under Medicare will be $15 trillion.

That of course would force hospitals, doctors, surgeons, and other medical specialists to shut down and would discourage innovation. Such ensuing chaos would adversely affect critical care. It might possibly lead to a complete government takeover of health care; that is precisely what most Obamacare supporters in government had in mind in the first place.

So the program, which will cut critically needed health care while at the same time raise government costs and taxes — and add immensely to the nation's indebtedness — rates as a logical target for the budget axe in the 2012 budget due to take effect October 1, 2011.

Chip away at it?

Here's an idea bandied about by writers of letters-to-the-editor of newspapers and by some readers of this column:

In the coming months, the Republican-controlled House — with many Tea Party-supported members — can pick this monster apart, repealing its most blatantly obnoxious parts one by one. Send each piece of repealer legislation to the Democrat-controlled Senate as a "stand-alone" bill, hopefully with conservative sponsors in the Senate's expanded GOP minority.

While the House-passed repeal of the entire Obamacare bill is not likely to get serious consideration in the Senate, a series of individual measures — each repealing a different one of Obamacare's ugliest components — just might. Each one would shine the public spotlight on such intrusive sections as those whose effect could very well deny crucial care to the old and the sick. That repealer in turn could garner the backing of Red State Democrats, either in committee or on the Senate floor. Each one could bring to the public square a debate where it is noted that our indebtedness is worsened by measures that create bloated bureaucracies in faraway Washington while denying family members back home the care they need to get well and/or remain alive.

This would confront the Red State Democrats in the Senate with the option of voting down Obamacare's most unpopular provisions.

This tactic would not be easy. It would require the expertise of those conservative senators who know Senate rules like the back of their hands. It would involve skillful maneuvering around Harry Reid, perhaps baiting him into delivering one of his gaffes as he defends what citizens would see as an assault on their most vulnerable family members and neighbors.

Instead of just vetoing the repeal of a big, several-thousand page bill that almost no one fully understands, President Obama, now in full campaign mode, would have to deal with several odious individual planks one at a time. At the very least, that could make it less likely that in 2013 we will have a president whose veto pen would be a barrier to full repeal of what — at one and the same time — is a horrendous imposition on our personal health decisions and — not incidentally — adds to our huge indebtedness.