Before you settle down actually to read this book, you may want to consider a course in anger management.

Many Americans are well aware that the Obama administration is a case study in the art of the concentrated "Power Grab," the volume's title. 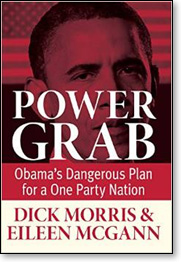 Fewer may realize the chilling long-range goal that is "Obama's Dangerous Plan for a One-Party Nation," the subtitle of the tome. We've seen all this before, while just not expecting it in this country.

Metaphors galore come to mind as authors Dick Morris and Eileen McGann lay out the entire step-by-step piecing together of a pattern bearing a startling resemblance to a well-coordinated political attack on America. Another mere case of "That's just politics," it is not.

One metaphoric resemblance recalls the ancient yarn of the frog in cold water heating up so gradually that by the time it's boiling, it's too late for the frog to escape the ultimate consequence. In the end, we are left to ask if we will be prepared to counteract the "one party nation" scheme before time has run out on us.

Readers may be tempted to scoff at the very idea that the "cradle of democracy" could possibly come close to the trap set by tyrants throughout history in Europe, Asia, Africa, or in places south of our border.

The American mind-set would never stand for it, they tell themselves. We may indeed be different, but these authors are convinced someone has come along who thinks he has the keys to unlock the 200-plus years resistance to and survival of attempted tyranny.

Morris and McGann, a husband and wife team, offer no comfort to those who will not take a realistic look at what these authors say is going on right before our eyes.

"For those who work with their hands," they warn, "we need to make them realize that [Obama's] global warming policies will take away our jobs, even as his immigration programs deluge our market with cheap labor."

"Power Grab" argues that American taxpayers should be aware that Obama's entitlement policies "are based on the political calculation that we can rob those who earn and pay those who loaf." That, by the way, is not to belittle or shame people who cannot help themselves.

Further, our current White House occupant is "letting the worst offenders out of prison and handcuffing efforts to keep us safe."

This administration "is dumbing down our schools, letting students graduate who are unprepared for the real world, and ill-equipped for anything but welfare."

Seniors should be aware how our current leadership is "weakening Medicare and basing our healthcare system on a rationing of services."

"The average working person needs to understand how premium increases triggered by Obamacare, utility bill hikes caused by EPA regulations, and taxes imposed by the government eat up their paychecks and diminish their ability to enjoy a comfortable life." 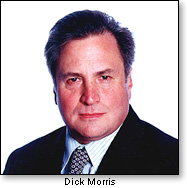 Isn't it great that we have this wonderful new American-invented internet (FYI – not by Al Gore) to share with the world? Here we can have instant communication unfettered by the prying eyes of government snoops or curbs on free speech.

Enjoy it while you can. Obama's Federal Communications Commission (FCC) and the high levels of the United Nations are collaborating to take that away from us.

Morris and McGann outline a long list of steps in the effort to take over the internet as one of several means of taking us toward world governance. (By the way, the authors name the strange  or maybe not so "strange"  bedfellows in that well-laid plan for our future.)

Reading what Obama himself has said he would change if only he had his way can leave one depressed. Apparently, even the U.S. Senate under the thumb of a reliable ally such as Harry Reid is not good enough for this president. He has bemoaned the fact that every one of the 50 states has equal representation in that august increasingly non-deliberative body.

Morris and McGann's obvious conclusion is that "the constitutional scholar in the Oval Office," as one spokesman labeled him, would rather have a Senate dominated by the big Democratic states to the detriment of the smaller Republican ones.

A former adjunct law professor should know that the Founding Fathers forged the compromise where equal representation in the Senate would serve as a counter-balance to the House where states are in fact represented according to population numbers.

But as the authors of "Power Grab" make clear, compromise is a strange concept to this White House. It's "his way or the highway," they write.

There are as yet no midnight knocks at the door or strange disappearances of high and low profile people, as has happened in some "one party" countries. With the prospect of this security changing in the future, Morris and McGann call for remedial political action in 2014 and 2016.