July 15, 2009
A dozen bound and tortured bodies were discovered dumped on the side of a remote highway in Michoacán. Police found the latest victims of the ongoing battle between rival drug traffickers on Monday. A threatening message was located near the beaten bodies of 11 men and one woman piled up and wrapped in a tarp, police revealed at the scene. Sadly, this has become a frequent occurrence: Last week, police found four bodies and a menacing note in the same spot. 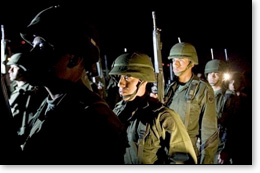 This reoccurring brutality stems from opposing drug cartels fighting over cocaine smuggling routes running up from Central America into the United States, the world's top drug consumer. Because Mexico's drug trade has become a very lucrative business  pulling in billions a year  having control of these routes ensures a hand in that money.

Despite thousands of Mexican troops dispatched to numerous drug hot spots throughout the country, bloodshed has not decreased. U.S. authorities have offered a helping hand, pledging $1.4 billion through the Merida initiative in an attempt to help Mexico combat the cartels.

The alarming rise of violence in Mexico perpetrated by warring Mexican drug trafficking organizations and the effects of that violence on the United States, particularly along the U.S. Mexican Southwest Border. The responsibility for this ongoing violence rests with a limited number of large, sophisticated and vicious criminal organizations known as Mexican Drug Cartel (MDC's) or as the U.S. Government prefers to call them Mexican drug trafficking organizations (DTOs)  not individual drug traffickers acting in isolation. Their illicit drugs are destined for communities throughout the United States, Mexico and Europe. They generate billions of illegal dollars annually. These organizations support candidates for local and national office and bribe officials and particularly Mexican law enforcement all the way from a local Mexican cop on the beat to the highest levels of the Mexican Federal police and all levels in between.

These organizations also use violence to protect trafficking routes throughout Mexico and deep into the U.S. These organizations retaliate against individuals, organizations and uncooperative law enforcement personal thought to have betrayed them, and to intimidate both Mexican and American law enforcement and both countries citizens. Drug-related murders in Mexico doubled from 2006 to 2007, and more than doubled again in 2008 to approximately 6,200 murders. Almost 10 percent of the murders in 2008 involved victims who were law enforcement officers or military personnel. To date in 2009 there have been approximately 4,000 drug war-related murders in Mexico. During the last decade the surrogates of Mexican drug cartels meaning Mexican gangs and American gangs have expanded their presence across the United States and dominate the US drug trade and operate in over 230 American cities and are expanding at an alarming rate.

The U.S. Government has in the past concentrated on arresting low level drug dealers and users. Rarely was any high ranking operative much less Mexican Drug Cartel members tracked down or brought to justice.

From the lowly drug user to the small time dealer the old war on drugs rarely seemed to be able to find and arrest those who operated in the upper rungs of the drug trade. Very few drug organized growers, producers, processors or those that finance the illicit drug trade here in this country much less organizations like the Mexican Drug Cartels have been brought to Justice.

Now that the U.S. has done away with the term "War on Drugs" according to the government a new approach is being developed whereby the U.S. Government working with other governments plan to get to the root of the problem by dismantling transnational organized criminal groups, such as confronting the Mexican Drug Cartels as criminal organizations, rather than simply responding to individual acts of criminal violence.

Pursued vigorously, and in coordination with the efforts of other U.S. Government agencies and with the full cooperation of other Governments like Mexico, the U.S. believes this strategy can and will neutralize the organizations causing the violence.

U.S. Government documents show that during a report to Congress this month by Lanny A. Breuer an assistant attorney general in the criminal division United States Department of Justice stated that "the department's strategy to systematically dismantle the Mexican drug cartels, which currently threaten the national security of our Mexican neighbors, pose an organized crime threat to the United States, and are responsible for the scourge of illicit drugs and accompanying violence in both countries. He begins by emphasizing the priority that this issue commands at the highest level of the department's leadership, including the U.S. Attorney General himself.

This Strategy directs Federal agencies to increase coordination and information sharing with State and local law enforcement agencies, intensifies national efforts to interdict the southbound flow of weapons and bulk currency while stopping illicit contraband from being trafficked north, and calls for continued close collaboration with the Government of Mexico in efforts against the drug cartels. The Strategy is an important component of the Administration's national drug control policy and complements the Administration's comprehensive efforts to respond to threats along the border.

In his remarks on the Strategy, Attorney General Holder stated, "Drug trafficking cartels spread violence and lawlessness throughout our border region and reach into all of our communities, large and small." He further noted, "By focusing on increased cooperation between the U.S. and Mexican governments as well as enhanced communication within U.S. law enforcement agencies, the National Southwest Border Counternarcotics Strategy we introduce today provides an effective way forward that will crack down on cartels and make our country safer."

Another important component of the department's efforts to neutralize the powerful Mexican drug cartels is the Mérida Initiative, a partnership between the Government of Mexico and the United States. The Mérida Initiative presents new opportunities for expert collaboration on many fronts. With Mérida funded programs coordinated by the Department of State, the Department plans, among other things: (1) to place two experienced federal prosecutors in Mexico to work with their counterparts in prosecutorial capacity-building; (2) to assign a forensics expert in Mexico; (3) to assist Mexican law enforcement and our interagency partners in strengthening and developing vetted teams and task forces that can work with U.S. federal law enforcement agencies to attack the cartels across the range of their criminal conduct; (4) to advance fugitive apprehension with U.S. law enforcement agencies and extradition with our Criminal Division experts; (5) to assist Mexico in developing an asset management system to deal with the assets seized and forfeited in criminal cases; (6) to assist Mexican law enforcement and prosecutorial offices in strengthening their internal integrity; (7) to assist Mexican law enforcement officials and prosecutors in enhancing evidence collection, preservation and admissibility; and (8) to provide expert consultations on victim assistance and witness protection issues. At the same time, as an operational matter, the department continues to work closely with Mexico as it addresses the issue of cartel-related public corruption, including through investigative assistance.

Further the report goes on to say that the department's strategy to identify, disrupt, and dismantle the Mexican drug cartels has five key elements and supports the National Southwest Border Counternarcotics Strategy. First, the strategy employs extensive and coordinated intelligence capabilities. The Department pools information generated by our law enforcement agencies and federal, state and local government partners, and then uses the product to promote operations in the United States and to assist the efforts of the Mexican authorities to attack the cartels and the corruption that facilitates their operations. Second, through intelligence-based, prosecutor-led, multi-agency task forces that leverage the strengths, resources, and expertise of the complete spectrum of federal, state, local, and international investigative and prosecutorial agencies, the department focuses its efforts on investigation, extradition, prosecution, and punishment of key cartel leaders. As the department has demonstrated in attacking other major criminal enterprises, destroying the leadership and seizing the financial infrastructure of the cartels undermines their very existence. Third, the Department of Justice, in concerted efforts with the Department of Homeland Security, pursues investigations and prosecutions related to the trafficking of guns and the smuggling of cash and contraband for drug-making facilities from the United States into Mexico. Much of the violence and corruption in Mexico is fueled by these resources that come from our side of the border. Fourth, the department uses traditional law enforcement approaches to address the threats of cartel activity in the United States.

These threats include the widespread distribution of drugs on our streets and in our neighborhoods, battles between members of rival cartels on American soil, and violence directed against U.S. citizens and government interests. This component of the department's strategy will inevitably include investigations and prosecutions of U.S.-based gangs that forge working relationships with the Mexican drug trafficking organizations (DTOs).

Fifth, the department prosecutes criminals responsible for federal crimes involving murder, trafficking, smuggling, money laundering, kidnapping and violence. The ultimate goals of these operations are to neutralize the cartels and bring the criminals to justice.