RenewAmerica.com May 11, 2021 Click here to receive our twice-weekly Newsletter

Thanks, Vlad
America Owes A Debt Of Gratitude To Vladimir Putin

March 11, 2014
America owes a debt of thanks to Russian president Vladimir Putin. Before his Stalinesque invasion of Ukrainian territory, few seemed concerned about Russia's drive to modernize its military and Moscow's ever tightening military alliance with China. After Putin's military adventure in Crimea, a parade of experts, pundits, and talk show hosts are now talking about Putin's goal of re-forming a new version of the Soviet Union, and some have even applied the term "Communist" to events in Russia.

(INA Today readers, of course, have been informed of these and related matters for a decade and a half). 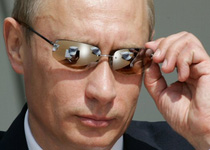 Putin and The Plan

While this new awareness on the part of the members of America's news and commentary community is encouraging, if we are to counter Putin and his ilk, a better understanding of the political elite in Moscow and Beijing is vital.

Putin is not merely a thug, a school yard bully, or anything of the kind. He is a true believer in what he has referred to as "the cause," and "the cause" is Communism. Various commentators, including talk show guru Rush Limbaugh, have stated this, but what is lacking is the realization that Putin is not alone in his desire to re-form the Soviet Union. The restoration of the Soviet Union, in some version or other, has been the goal of the Moscow elite since the collapse of the original Union of Soviet Socialist Republics (USSR).

While then-Russian president Boris Yeltsin in 1992 was speaking to a joint session of the U.S. Congress and promising lasting peace and friendship, Russian spies continued to carry out Soviet-style deep penetration efforts against America and our allies. Yetsin also took the first steps in forming what became under Putin a "Union State" between Russia and the Stalinist pariah nation of Belarus. (Where, it may be added, that the KGB is still called the KGB).

Putin continued and accelerated what Yeltsin had begun. The Russian army retained Soviet-era insignia and banners; Soviet Cold War spies, living and dead, were given special honors; the mass murderer and "breaker of nations," Josef Stalin, acquired a new coat of whitewash; even the cruiser Aurora, which is credited in Soviet lore for playing a key role in the Bolshevik overthrow of the Russian Provisional Government (which had taken power after the Tsar's abdication), has again been given the pride of place which it enjoyed in the Soviet era.

The role of Ukraine

Russia and Ukraine share a common history which extends back over a thousand years. Often this shared history has been bloody and bitter, but similarities in language and culture make events in Ukraine immediate and vivid to the Russian people.

Ukraine was an important part of the Tsarist empire and one of the original members of the USSR. In the Soviet era, Ukraine was not only an important agricultural area, but also a center of industry.

Today, a much of Russia's natural gas exports to Europe go through Ukrainian territory. Putin and the Moscow political elite recognize that Ukraine is an important element in a new Soviet Union because of its historical ties to Russia, its strategic location between Europe and Russia, its sheer size (the second largest nation in Europe), and its continued economic importance.

Of the post-Soviet Ukrainian leaders, none has labored more intently for Moscow than Viktor Yanukovych, who was first elected president in a rigged election in 2004. He was removed from office by another election in 2005 after mass demonstrations which became known as the Orange Revolution. A split in the "Orange" movement allowed Yanukovych to be reelected in 2010, only to be deposed by mass protests in February 2014 because of his extreme pro-Russian policies, corruption, and generally tyrannical rule.

The pro-freedom movement which removed Yanukovych was not merely a localized rejection against Russian dominance and world-class corruption; it also represented a direct threat to the existence of the Moscow political elite.

The contagion of human freedom: What Moscow fears most – a revolution by its own people

Putin's desire to have Ukraine as member of a nascent Soviet state is second only to the knowledge that Moscow must suppress the pro-Western revolution that ousted the pro-Kremlin Yanukovych. The Moscow ruling elite justifiably fear the contagion of the democratic spirit that is now evident in Ukraine.

For all the pro-Soviet propaganda and political manipulation after the collapse of the USSR, there still exists within the Russian people a desire for true human freedom. The Russian political elite know this, and live in fear of it.

The unrest recently unleashed on the streets of Kiev is the most significant reason for Moscow's intervention. The seriousness of the threat to the Moscow elite was made clear, ironically, by a political leader supposedly in opposition to Putin's ruling party. Communist Party Gennady Zyuganov chief declared with remarkable candor that "It is possible that in two years there will be a similar scenario in Russia," if Moscow did not take action.

The Moscow elite were extremely fearful of the "colored revolutions," inspired by 2004 Orange Revolution and its spread to what Russia calls its "near abroad," the states of the former Soviet Union. Moscow's spy services took action in cooperation with pro-Russian elements within the "near abroad" states to blunt the effects of that expression of human freedom. To a large extent, Moscow was successful.

After the overthrow of Yanukovych, however, the same cold fear is again motivating Putin and the rest of Russia's political class.

The demonstrators in Kiev now were not merely protesting a corrupt election. They rejected what would certainly become Ukraine's merger with the new Soviet state and ousted a loyal pro-Moscow figure. The demonstrators brazenly denounced the lies from both Yanukovych and his Russian masters.

Putin had to make a bold move or risk not only a serious blow to his plans for a re-formed Soviet Union, but also face the wrath of his own people awakened by the cries of freedom coming from the streets of Kiev.

Although most of the world condemns his actions, Putin does have a loyal, and increasingly powerful, friend. In his confrontation with the West, Putin has a long-cultivated ally.

Some commentators have taken note of China's support of Moscow's invasion of Ukrainian territory, and the similarity of Russia's land grab to China's claim to the South China Sea, which is both mineral rich and a vital corridor for world shipping.

Suddenly, some pundits are recognizing the common interests, methods, and close cooperation between Moscow and Beijing. This was not supposed to happen.

After collapse of the USSR, pundits in the U.S. of various political persuasions speculated that fear of an increasingly powerful China would drive Russia to align with the West. These pundits, however, failed to acknowledge that Yeltsin's Russia had early on began a policy of providing military assistance to the People's Republic of China, providing technical aid, training for officers, and military hardware.

Moscow's assistance to the PRC has continued for years, unnoticed among the U.S. punitry, still expecting a U.S.-Russian alliance directed against China.

There also existed among U.S. policymakers and politicians the belief that the Chinese people would eventually emulate the example of Russia and rid themselves of their Communist overlords. This confidence was so great that the U.S. exported much of its manufacturing capability to the People's Republic of China. Politicians hoped that industrialization and a new wealthy class would lead to the end of Communist rule, and U.S. manufacturers saw great opportunity for quick profits from selling both to U.S. markets and a burgeoning consumer class.

In the meantime, millions of Americans workers permanently lost their jobs.

The American political leadership remained blind to the reality that none of their preconceptions were based in fact. Not only did Russia and China grow closer, but in 1997, Yeltsin and then-Chinese president Jiang Zemin jointly declared a New World Order that would counter and eventually replace American leadership in the world.

Putin again carried on and intensified what Yeltsin had begun. Russian military aid to the PRC evolved into a full-scale military and naval alliance. Joint exercises are held involving ground, air, and sea forces of both nations. Moscow and Beijing are even considering a joint lunar base. As one military commentator on Fox News recently acknowledged, America is indeed facing a "Moscow-Beijing axis."

To put the matter bluntly, neither the U.S. nor its European allies are ready to face Putin's Russia, an expanding China, and certainly not an alliance between Russia and China. Years of denial and self-deception have put us in a very dangerous position. Our options are limited, but they can be effective.

To its credit, the EU is showing cooperation with the U.S. in placing some sanctions against Russia, and a political pact between the new Ukrainian government and the European Union is in the works.

There is, however, also the question of how much pressure the EU is able or willing to put on Russia. Unfortunately, unlike the period of the post-WWII Soviet threat, Europe is closely tied economically to Russia. The European Union gets one-third of its natural gas from Russia, and European financial institutions are heavily invested in Russia.

Norway could assist Europe, as could the U.S., if unnecessary regulations were relaxed, but a change of suppliers would take time and increase costs, and the possibility of retaliation by Moscow would loom large.

Although EU sanctions would be costly to Russia, Putin is betting that Russia can stand the pain, while Europe will not.

There is, however, another possibility for pressuring Moscow, and it would not involve the vulnerable European economies. The United States could demonstrate its displeasure with Russian aggression and express its commitment to freedom by supporting pro-freedom elements in Moscow's neo-Communist allies in Latin America.

The pro-Moscow governments in Latin America, Cuba, Venezuela, and Nicaragua have recently hosted Russian bombers and warships. The intent is clear: turn Carribean Latin American waters into a Russian lake. Moscow's Latin friends, however, do have a problem: in each nation there are significant pro-democracy elements.

It is in our interests to aid these pro-freedom groups, both from a moral and a strategic view.

Although the present administration would find this strategy distasteful, it is certainly open to the next U.S. President. Moscow is planning for the long term. America must recognize this fact and do the same.

It is long past time to deny Moscow the naval and air presence in Latin America which the Russian military now enjoys in Cuba, Venezuela, and Nicaragua. The Moscow elite has shown its capacity for aggression when their interests seem to demand it. The United States has every right to ensure its safety and protect those who have the same values of human integrity, whether in Ukraine or in its own "backyard."