Arlen Williams
Bill O'Reilly, why so seriously ignorant about Obama?

September 17, 2009
Did you happen to see Bill O'Reilly last night, scratching his head to a gelatinous mass over the increasing anger in America with Barack Obama? Throughout the program he puzzled that somehow, increasing numbers of Americans actually tie the scandals of ACORN to the Communisty Organizer in Chief.

But, he knows much too much, from way too many interviews and conversations with the powerful, to be so gullible as to fall into that trap, himself. After all, reports of nefarious Acornistas are unheard of, to even ABC's Charlie Gibson.

I have a friend who talks about "aperceptive filters"  established beliefs, which inhibit the formation of new understanding. Such a mental block must plague many establishment conservatives, from Fox News' O'Reilly and Neil Cavuto, to what, all but a dozen or so in Congress. Apparently, to them, considerations of global Marxist-fascist conspiracies are mind game relics  so Twentieth Century. Surely, nothing of the sort ever took root in America, anyway....

They must look down Charlie Gibson's nose, upon such "conspiracy theorists" in their collegial chats: 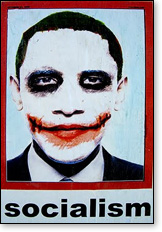 (chortle, chortle) "Look at all these bloggers and this Glenn Beck fellow!  and a couple million protesters, last Saturday! Why, it's like they think  didn't I even see a sign, one carried  declaring that some kind of, what's the old term... c-o-m-m-u-n-i-s-t... p-l-a-n, is being carried out! As if this is the Nineteen-Fifties! Or the Twenties! 'Ooh, watch out, it's the Reds!'" (harrumph, chortle, sip from stemware)

Is that a fair depiction of the cocktail party cred that you covet, Bill? Neil, do a really think George Soros (and just about anyone with big money) deserves your worshipful respect? Thank you for closing your mouth and wiping the drool off your chin, after your latest televisit with him.

When do you think O'Reilly, that hard-bitten investigative journalist, purveying peeks at inside politics, will realize, those lowly ones he calls "the folks" have scooped him?