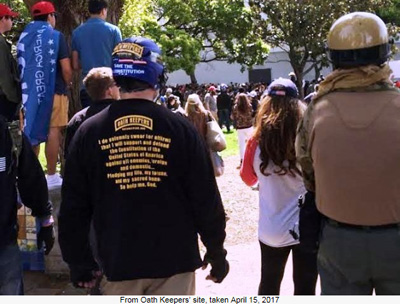 An Oath Keepers' Call to Action was released on Tuesday night, April 25. It concerns the appearance of Ann Coulter at Berkeley University on the evening of this Thursday the 27th. Concerned they are, very, and they are making detailed requests of any fellow patriots planning to attend or demonstrate there.

Without a strong show of support and actual defensive potential, lives will be in danger, I concur. You know Berkeley, right? – the seedbed of the collectivists' allegedly free speech movement, now the locus of neo-Marxist Antifa thuggery in America's west.

Word has now gotten around that Antifa (including the San Fernando Valley's Oak Roots Collective) is self-indicated as America's contemporary branch of the Trotskyite movement of the same name. It was intended to be globalist from the beginning and cut its teeth in Germany's 1930's. There, they engaged actual fascists in violent street skirmishes and weren't very kind to freedom lovers either. Here and now, Antifa's fellow travelers incite them to violence with the old Bolshevik's own charge, "Acquaint them with the pavement."


Grab every fascist or every isolated group of fascists by their collars, acquaint them with the pavement a few times, strip them of their fascist insignia and documents, and without carrying things any further, leave them with their fright and a few good black and blue marks. 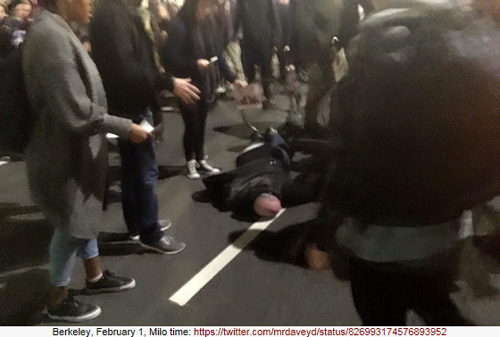 It has also been made clear in patriot media that the mayor of the City of Berkeley, Jesse Arreguin, is a member of a subversive group interoperational with this Antifa branch (BAMN, initials for By Any Means Necessary). It is run by Yvette Felarca. She teaches middle school. Good morning, Ms. Felarca. At a very recent protest, one reporter observed that while Berkeley cops did not step in to separate Antifa from pro-Trump demonstrators, they became very engaged when the latter came near Felarca.


Wait, WHAT!? The mayor of Berkeley is a member of BAMN? Is that why we were arrested the moment we went near their leader Felarca? pic.twitter.com/nIjqPCVtwN


This apparently answers the question of why, time after time, the Berkley Police have been ordered to stand away, instead of keeping Antifa and the pro-American demonstrators separated (video, example). They have allowed numerous people be injured, some requiring medical treatment. In a normal state, the governor would assign its National Guard, if the local government and its police department were not protecting the innocent. But this governor is Jerry Brown (D). At least one video researcher suspects police actually fired a concussion grenade into a mixed and argumentative crowd at the April 15 skirmish. The explosion in question apparently raised emotions further, immediately provoking a violent outburst (video). Such is the kind of suspicion that arises when subversion is observed.

Coming to the rescue, Oath Keepers and the Three Percenters are patriotic organizations consisting of former law enforcement officers and members of our United States Armed Services. They make it clear they are preparing for engagement, should it become necessary to protect the peaceful from harm. It is essential that pro-free speech demonstrators at Thursday's event submit to their leadership, do what they say, just how they say, without exception. Violence of this kind tends to escalate with repeated events, especially when the promise of mass media spectacle also escalates. With Ms. Coulter setting foot on the grounds, that is assured.

Are you a local and will you be there to show your support? Remember, the whole world will be watching.

Without excerpting Oath Keeper's bulletin, you may find it here:


CALL TO ACTION: ALERT! You are Needed to Protect Ann Coulter Speech this Thurs, April 27 in Berkeley! – Oath Keepers

Time to Stand Again in Defense of Free Speech [NOTE: This is for those within driving range. See detailed note below] Oath Keepers and patriots, NEW MISSION. ANN COULTER SPEECH, APRIL 27, BERKELEY, CA It is now confirmed that Ann Coulter will indeed speak in Berkeley California on Thursday afternoon, April 27.


Gulag Bound and our daily, The Globe and Malevolence will keep you apprised. Personally, I suggest a word of prayer.