A recent prophecy of Pastor Kent Christmas, presented in a video episode of Dutch Sheets highly recommended Give Him 15

Worship of the God of the Bible has increased in recent generations through the spiritual gifts, as they are called in the Scriptures. One of these gifts is that of prophecy. More and more Christians have become notable as prophets, more than at any other time in recent history. Numerous Christians who have been baptized in the Holy Spirit may at times, think, pray, speak, sing, or write prophetically. But some of us prophesy so frequently, poignantly, and effectively, that they become recognized as being a prophet, one of five ministries recognized in the apostle Pauls letter to the Ephesians.

In and about the United States of America, this talent pool has increased significantly over the last dozen years in speaking out regarding government and politics (true politics, not partisanship). Among these, something astounding has happened, something which, my own study of history does not present since the times of the Old Testament, or perhaps, the early church. From as early as 2007 and onward, a broad consensus of prophets known for their accuracy and salience, have spoken of God establishing a national leader of His own particular choice in America, along with significant, related revelations. Specifically, these prophets refer to the consecutive-term presidency of Donald Trump. Notably, no such prophet that I have found has spoken as from the Lord to deny this eight year positioning at any time afterward.

Here are numerous, though Im very confident not all, of these. Christians familiar with the Charismatic Renewal will likely know some or even all of these names, from their own publications, Steve Shultz Elijah Streams/List, Sid Roths Its Supernatural!, CBNs The 700 Club, etc.:

Their prophecies have come in numerous ways, including public pronouncement, private revelation with the taking of notes, visitation, vision, and dream, plus Spirit-led interpretation if required. 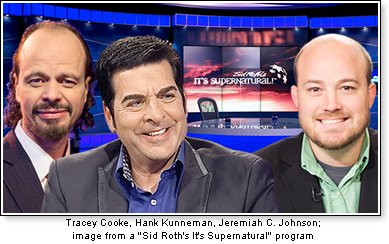 In addition to this, well noted praying, professing, and actively involved intercessors, such as Dutch Sheets, Cindy Jacobs, and Lou Engle have heard from numerous others, of their own prophetic words, dreams, and visions.

Reinforcing it all with due context, a special interpreter of the Bibles own prophetic ministry and of the signs of the times, Jonathan Cahn, has, along with others in an event called The Return, spelled out and provided for a very particular and pivotal way of Gods redemption which goes hand in hand with such prophetic ministry. Many others of Gods Church have applied similar, mutually complementary occasions and processes in Gods general plan of Solemn Assembly, during a year in which our nation and world are plagued, literally and much moreso, figuratively.

The one term from the Bible which sums that up is repent (turn, or re-turn, from sin to God) and it is a must for every person, for his own, eternal salvation. It is also an entre to the Lord for His collective and temporal deliverance including for even those who are not repentant, at least of yet. We all may, as Nehemiah, repent for the sins of our nation, our state, church fellowship, family/bloodline, and for other groups in which we may be identified. Repentance to God is how we comply with our own deliverance.

Together, the words expressed through all of the above have reached the hearts of many Christians in America and all over the world. Not even counting the most essentially spiritual impact of this, it has contributed greatly to the strength of commitment of the core, stalwart patriots of the sovereignty and freedoms of the United States of America at this very critical hour.

But why would God care so much, to intervene so directly and strongly about this presidency? Many reasons have been expressed and I believe many are self-evident to the discerning eye.

Scholars and intercessors point out that America has been dedicated to the Lord for His purposes, including pivotal examples of the landings in 1607 Virginia, and 1620 Massachusetts. Upon such dedications, the Declaration of Independence ends with an appeal for covenant terms with God for our very existence as the nation it charters beforehand as specifically under Gods authority and dominion, appealing to the Supreme Judge of the world for the rectitude of our intentions. This request was answered by His signature in our miraculously successful American Revolution and His reply has resounded ever since.

Are the Declarations free and independent [u]nited States of America exceedingly threatened right now? Which presidential ticket further threatens? Which defends? And on how many fronts? For the living, one begins with the Right to Life and takes it from there.

Looking to the future, it has been declared that we are experiencing the inception of an era of God invigorating His believers with very significantly increasing power, for the fulfillment of the Great Commission through this age. Why would God care so much? God is love.

Why such brinkmanship, if God wishes to secure a second, decisive Trump term? It has been expressed by numerous of the prophets that He wishes to draw out those seeking a very perversely evil, global empire and their minions, for the sake of exposing them and for their elimination in various ways. That refers to humans and demons, both. Also, He desires our attention and for it to be clear among those with eyes to see, that this deliverance from horror comes from the Lord Himself and for His own reasons, including those just referred.

Books are being written of this, we may be sure. Personally, I anticipate featuring some further prophecy about these things, as they are given, from intimation through declaration. It is sufficient for me to profess here, that according to His own word delivered through His prophets, Donald Trump shall be U.S. President this next term and that the Lord has very important purposes at this moment, a time of immense, subtle warfare, at an immense, terrible fork in the road for human history.

So, whether at any moment in our abjection before Him, we are listening, confessing, repenting, pleading, discussing, requesting, meditating, praising, giving thanks, proclaiming, or all of the above, let us choose the way of fearing and loving God.

Meanwhile, have a look with me, if the atmosphere allows, at our very peculiar Christmas star at this seasons longest, darkest night. Our planetary prince and princess bride meet in the heavens. Is something promising being conceived? 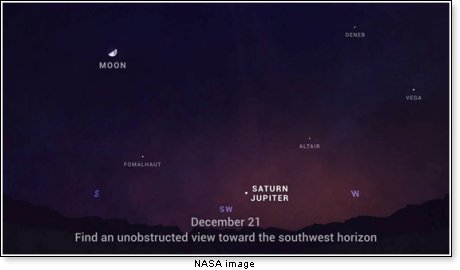