April 23, 2010
Sarah Palin says it is "crony capitalism." Has a friend sent her latest Facebook essay to you in an email?

The hacks at Goldman Sachs say the password is "partner," as Governor Palin points out, below.

Yes, yes, and yes. And such fascistic, ministerial control is the initial structural focus of the neo-Marxist. It is Barack Obama's necessary step onto the treasonous road to a pseudo-democratic "dictatorship of the proletariat" and the unnatural and impossible communist dream of egalitarian collectivism. In this scheme, "too big to fail" is the excuse where that excuse may work, while the point is that the few, large institutions should be consuming enough to afford control over the entire market and eventually, the entire economy. 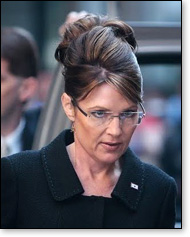 In the wake of the recent financial meltdown, Americans know that we need reform. Not only have many individuals learned lessons about personal responsibility through this, but we've been able to engage in a discussion about government's appropriate role.

The current debate over financial reform demonstrates what happens when political leaders react to a crisis with a raft of new regulations. First off, the people involved in writing government regulations are often lobbyists from the very industry that the new laws are supposed to regulate, and that's been the case here. It should surprise no one that financial lobbyists are flocking to DC this week. Of course, the big players who can afford lobbyists work the regulations in their favor, while their smaller competitors are left out in the cold. The result here are regulations that institutionalize the "too big to fail" mentality.

Moreover, the financial reform bill gives regulators the power to pick winners and losers, institutionalizing their ability to decide "which firms to rescue or close, and which creditors to reward and how." Does anyone doubt that firms with the most lobbyists and the biggest campaign donations will be the ones who get seats in the lifeboat? The president is trying to convince us that he's taking on the Wall Street "fat cats," but firms like Goldman Sachs are happy with federal regulation because, as one of their lobbyists recently stated, "We partner with regulators."

They seem to have a nice relationship with the White House too. Goldman showered nearly a million dollars in campaign contributions on candidate Obama. In fact, J.P. Freire notes that President Obama received about seven times more money from Goldman than President Bush received from Enron. Of course, it's not just the donations; it's the revolving door. You'll find the name Goldman Sachs on many an Obama administration résumé, including Rahm Emanuel's and Tim Geithner's chief of staff's.

We need to be on our guard against such crony capitalism. We fought against distortion of the market in Alaska when we confronted "Big Oil," or more specifically some of the players in the industry and in political office, who were taking the 49th state for a ride. My administration challenged lax rules that seemed to allow corruption, and we even challenged the largest corporation in the world at the time for not abiding by provisions in contracts it held with the state. When it came time to craft a plan for a natural gas pipeline, we insisted on transparency and a level playing field to insure fair competition. Our reforms helped reduce politicians' ability to play favorites and helped clean up corruption. We set up stricter oversight offices and ushered through a bi-partisan ethics reform bill. Far from being against necessary reform, I embrace it.

Commonsense conservatives acknowledge the need for financial reform and believe that government can play an appropriate role in leveling the playing field and protecting "the dynamism of American capitalism without neglecting the government's responsibility to protect the American public." We're listening closely to the reform discussion in Washington, and we know that government should not burden the market with unnecessary bureaucracy and distorted incentives, nor make a dangerous "too-big-to-fail" mentality the law of the land.

Real reform and truly appropriate regulation can be very difficult to instill, amidst entrenched, corrupt politics and an ideological enmity to the truly virtuous republicanism authentic to America. I personally know of no one with better experience as a pathfinder in just that reform than Sarah Palin. 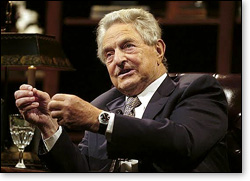 Concurrently, George Soros weighs in. Yes, Marxists go right for the banks. To prove the point to which I above allude, that truly evil, transnationalist master of manipulation (and of timing) has just written on the subject, too.

Big news! He is for Obamafinance plus more, and he spills the beans about what that means. He espouses the complete ministerial control of derivatives and has done quite a job of posing this anti-American tyranny as, of course, the only sensible and heroic solution, with the interest of the people in mind. He calls his essay "America Must Face Up to the Dangers of Derivatives," as if Soros, the economy destroyer, cared about dangers to economies, in his Pinky and the Brain megalomind.

Soros' writings on the "open society" are hyper-abstract rationalizations for global Marxist tyranny. Have you noticed that Barack Obama does not like to use the word "freedom" in his speeches and has actually used the phrase "open society" in lieu of that word? Substitute the words "globally controlled" for "open"; I leave it up to Soros to explain the tortured pseudo-synonym.

Rep. Michelle Bachmann has called this initiative worse than Obamacare. Are we learning why?