Arlen Williams
Want to understand Wall Street crises before the next one? Then, look again at 2008 - please!
Don't even think about not watching these

May 8, 2010
Question: What caused Bear Stearns, then Lehman Brothers to fail on Wall Street, at their appointed times, as the the mortgage meltdown "progressed?"

Clue: It wasn't someone who couldn't tell where the "M" and "B" keys are, on a keyboard.

Mind you, this is not the whole story; do not let anyone fool you. And I.O. neither confirms nor denies the author's implications regarding particular individuals. And we sure don't trust Michael Moore to present the story, straight (mentioned at the end, but you heard that if you viewed it, right?) But, the mega-criminals are out there, still. And they will continue to steal away but not to Jesus, our livelihoods

We would not make the mistake of assuming this was not very effectively connected with the other factors, including the the Revised Community Reinvestment (what better euphemism for Marxism?) Act and the creation of the mortgage bubble itself, with the built in shared failure of the mortgage derivatives bundling system and its green-light to the entire industry.

Also, we observe the work of Very Big Money (VBM) behind the various manipulations involved  VBM with a successful track record. Remember economy wrecker, George Soros, who admits he saw the bubble burst coming in "August of '07" and that he made money in it, is primarily a manager of the VBM of even fatter cats, including numerous central bank players and yes the name, "Rothschild" is included. And don't forget Soros' globalist, bring-down-America pals, Herb and Marion Sandler, who worked so closely, not only to help the time bomb go off in September '08, while making a malicious fortune in the process, but who have continued to work so closely with Soros and with Obama's legal and training client, ACORN. Just a glimpse into the VBM, there. 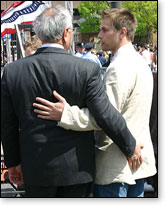 And, then, of course there were, are, and will be, the works of the folks in government, including Barney Frank providing cover for Fannie Mae and Chuck Schumer's work with Herb and Marion's "Center for Responsible Lending," including providing an apparent catalyst for IndyMac's failure. (Schumer might not like B. Frank getting top billing here, but he seems very used to being a neo-Marxist mover and shaker behind the titular one.) And of course, Franklin Delano Raines' fannie may just be riding where it needs to be sent, after his trickery is finally dealt with properly.

And, of course there was Red China loving, Congress manipulating Hank Paulson  and his young pal, Timmy Geithner (so far removed from it all, as kid chairman of the Federal Reserve of the distant hamlet of New York). Hank's boss, Bush-43? Just don't know. Do you? Feel free to comment or email, if you do.

And Timmy's boss? Mr. Hang Back and Watch, No Drama Obama? Wouldn't you like to read the text that came through that guy's Blackberry? Or, that keeps coming? You do remember what Sen. Jim DeMint told us a few days ago, about exactly who nixed Sen. Blanche Lincoln's transparency verbiage, for the new Obamafinance bill? Yeah, same guy: BHO. Go back and watch, if you like: "THE GREATEST SCANDAL IN MODERN HISTORY  Treason in Process." Transparency gets in the way of manipulation.

And have you watched the final version of the eye-opening Autumn-2008 video, "Burning Down the House?" And did you not read James Simpson's article, "Barack Obama and the Strategy of Manufactured Crisis," in that nostalgic September of 2008? Or, subsequently? Time flies, when we're having crises.  AW