Arlen Williams
Obamunist attacks on freedom of speech & the Marxstream media's duplicity
A primer, on the fly

June 30, 2010
Their taking more pages out of the Hugo Chavez manual, we count at least three major assaults by the Obamunists against American freedom of speech. Here is one of them. Please be encouraged to read this article at it's source in BigGovernment.com, but in your interest it is presented here, in its entirety.

While Free Press pitches a (staged?) hissy fit about one with AT&T, Verizon  and Google and Skype

Chairman Julius Genachowski and his Federal Communications Commission (FCC) have been for quite some time seeking to drastically increase their regulatory control over the internet. 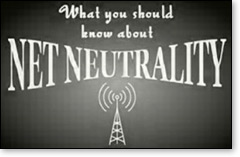 The Chairman and the Commission lack the legal authority to do this. They have been told this by (at least) a Clinton-appointee led federal appeals court  in the Comcast-BitTorrent case  and a bipartisan Congressional contingent, who wrote Chairman Genachowski letters telling him to cut it out.

Undaunted, Chairman Genachowski headed once more into the breach. On June 17th, he convened the five FCC Commissioners to vote on a proposed reclassification of broadband  from the lightly regulated Title I to the much more burdensome Title II. And the Commission voted to begin the investigative process, on a Democrat Party-line 3-2 vote.

All of this was done to the delight  and the crack of the whip  of the Media Marxists. Led by the egregiously mis-named organization Free Press, the Media Marxists make up the "media reform" wing of the "social justice" movement. Members of this movement are currently in power in Washington, and they are seeking to fundamentally transform our nation.

For the Media Marxists, fundamental transformation means eradicating all private ownership of all avenues of media and communication  radio, television and the internet  so as to have the government be the sole provider of all information. The damage this would do to free speech  not to mention the free market system  is of course all-encompassing. And decidedly frightening.

But I took some minor comfort when I heard that Edward Lazarus  Chairman Genachowski's Chief of Staff  had a June 21st meeting with senior officials from Verizon, AT&T and the National Cable & Telecommunications Association. After all, since they are large players in making the internet work, it makes sense to get their input on whatever it is the FCC is trying to do.

As irresponsible as the FCC has been, it was good to see this bit of rationality.

And these three telecom representatives were not alone in the room with Lazarus and other FCC staffers. Google and Skype  two huge players standing opposed to the telecoms on the FCC's broadband power play  were also in attendance  so much for the ex parte (one party) charge being leveled against the FCC.

So clearly this was not some inside job on the part of the Commission to "sellout" the Media Marxist push for dramatically more government regulation. (If only.)

Besides, Chairman Genachowski has already ignored a federal court and more than 240 members of Congress in choosing to press on. Certainly one meeting with members of the industry he seeks to increasingly regulate doesn't represent his waving the white flag.

Well, not according to Free Press. The next day, they issued a press release "warn(ing) against the industry takeover of open internet." And placed a full page advertisement in Big Media member the Washington Post  calling the meeting a "Big $ellout" and calling on people to "Stand up to Big Phone and Big Cable."

And Big Search Google? And Big Free Phone Skype? Neither the press release nor the ad so stipulated.

All this over one meeting. Which is inordinately hypocritical of Free Press, since they themselves have attended eight such FCC meetings since January.

All told (according to the FCC's log), there have been thirty meetings held this year attended by myriad Media Marxist organizations  Public Knowledge, Media Access Project, New America Foundation, Consumers Union, Consumer Federation of America and others.

So to say that one meeting with some telecom players represents the end of the Media Marxist run on the internet is patently absurd. To say it so publicly and loudly is even more so  and more than likely a part of the plan.

When Republicans in Congress agreed to that just-for-show date with President Barack Obama to discuss the government usurpation of health care, it gave the Democrats the fraudulent appearance of bipartisanship  after they had spent a year-plus shutting the Republicans out of the process.

Now we've had one FCC meeting with some telecom companies  after thirty with the Media Marxists. With Free Press providing additional cover and attention to it with their absurd press statement and advertisement.

So that later, when the Media Marxists get their way, it can be said that Chairman Genachowski and the FCC heard from both sides.

Much like on health care "reform," that's a fraudulent recipe for total disaster.

What are the other two assaults upon the First Amendment?

And in Congress, Elena Kagan, the pro-book-burning nominee for the U.S. Supreme Court, is now being interviewed by both the ravenously "progressive" senate Democrats and the toothlessly semi-progressive senate Republicans. "Pro-book-burning?" Here is another set of words for you, this time linking to a vid:

"It's fine if the law bans books because government won't really enforce it."
- Elena Kagan, 2009, what an Ace of Club Hammer & Sickle