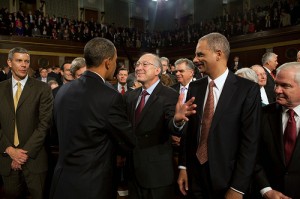 I meant for my comments to be very sparing, but succeeded in making them very atypical. As you know, these speeches are about what politicians sort of think they can get away with, before the public, the media, and even the twittering tongues and tingling legs of the pundits. In other words, they are conventional and sanitized, to say the least.

But, you, the reader of an article such as this, are not likely satisfied with even the prettiest, laundered, and ironed out veil over the body politic. We want the naked truth, "warts and all," as Lincoln said to the portraitist. We know this crisis America faces is not just about monstrous debt and debilitating taxes. We see, more and more, that it is about competing versions of a globally orchestrated and controlled society, well in process of being foisted upon Sovereign American Citizens.

The predominant version at present is Marxofascist, that is, it is authoritarian, statist, and collectivist, with varying degrees of a show of enforced egalitarianism — enough to bring along the few among us, whose sense of fairness has turned traitorously envious and invidious.

But this version of controller, especially after the 2010 elections and in preparation for 2012, must hide their neo-Marxist desires. They can't exactly tell you they intend to keep following the Trotsky-Gramsci-Alinsky-Cloward-Piven-Weathermen model, to collapse a sovereign and free American economy and society, now can they?

No, instead, here is what they say.

The second version of how America must "progress" to face the world's challenges is that of the Whigs, er, Republicans, but they also face a deep internal split, don't let them hide it. They can't spell reality out to America, not really, not just because of the punditry and so many Americans' poor state of readiness to hear the truth; no they can't spell it out, because that would out many of them.

Those are the closet, Star Trek globalists. Like the now deceased Gene Roddenberry's version of the future, they see the world coming together under global governance where, without even a hint of theologic, philosophic, or scientific explanation, power ceases to corrupt and absolute (universal) power becomes universally benign. Did I say Roddenberry? I could have meant Rockefeller.

They don't want you to know that any enforcement of such an "ideal" destroys authentic America, dismisses Citizen Sovereignty, and reduces our nation by the least common denominator with the tyrants and tyrannies of the world.

Here is the wisdom of the GOP who do big things like compromise on major financial regulations that continue to give Big Manipulators cover and assure the SEC is made unaccountable to the People through immunity to Freedom of Information Act filings.

But there is a large and growing populace of self-educated Americans, whose sense, sensibility, and ultimate sophistication exceed both the anti-American dupers and their sheepish dupeniks, alike.

They know that America is not essentially about Paul Ryan's "limited government," but about liberty within a politic of self governance, recognizing and adhering to the popular sovereignty provided by Providence, through the American Revolution. And that is what "American exceptionalism" really means — not that we are ahead in the world, but that unique on the earth, a nation arose whose entire populace have the Divine Right of Rulers, working governance out among ourselves as equals under the law. That is what makes us the "last, best hope" and as ontologically close to a "classless society" Utopia as it gets in a fallen world.

Further, we understand that the Utopians of this world and the controllers who manipulate them see, accurately, that a Sovereign America of Sovereign People are the major impediment to their "progressive" aims. They have seen the enemy and it is us. Hence, the Cloward-Piven strategy to bring about the failed state of America and hence, the shadow government of czars and bureaucratic councils (in the Russian language, soviets) ready to do the bidding of a world all too ready to bail out a too-big-to-fail America. That is where we seem to be headed.

That animus explains not only the exploited and manufactured crises and the kleptocratic redistributionism of the varying forms of Marxism and fascism aimed at Americans — it even explains how, at heart, the wishful thinkers of the notion that freedom may exist in the world without popular sovereignty, so often align with them. America must be managed, controlled, manipulated, and nudged away from its solid foundation, in order for the planners and controllers to move it to a place where it can be a tame member of the league of... united... nation... states. And, of course, that means regulating and managing each of us.

Representatives Paul Broun (GA) and Michele Bachmann got GOP-reprimanded by the GOP-nice and had to issue GOP-apologies, over two years ago now, for warning of the Obama regime's Marxism. Alas, they knuckled under, yet who else has even stepped that far along, in telling the truth?

The names of Allen West and Rand Paul come to mind, also Sarah Palin, though her education must continue, if she is yet prone to support the Law of the Sea Treaty. That is not a knock on her, though. All of us must continue learning.

Well, there are others who have explained elements of our true crisis, but we hardly expect State of the Union Date Night to be the occasion for telling America about our deepest, clearest reality. At least Rep. Bachmann is able to spell out some of those assaults upon our economy and liberty, if not their ideological and yes, conspiratorial causes — and summon some honest passion.