December 29, 2011
Midst the rising status and scrutiny of Ron Paul and his R-love-ution, this humble disciple of world affairs finds him both right and wrong. This is how it so appears, about the Middle East's problems with America and vice versa. 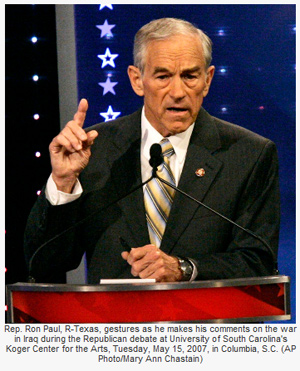 He is very wrong to oppose Israel's Gaza blockade and to treat Israel as if it were at best, just one more nation, or at worst, a trouble-making entity in the region with apartheid policies, a nation he might catch himself wishing, did not exist.

He is wrong to downplay the threat of global jihadism; also, in his apparent underestimation of the force of Marxism, Cold War through the present.

However, about his claim of blowback from American intervention in the Mideast being the cause of our trouble with atrocious Islamist terrorists, he would be right to say it is an essential cause and stated reason, albeit not the only cause. They are also out to fulfill the bloody eschatological mandates of the Koran, after all.

For the most part, the American problem in the Mideast began with our siding with the deteriorating British Empire (all empire is bad) against the legitimate and nationally independent (good) government of Iran, in 1952. In short, Iran, with its parliamentary prime minster, Mohammed Mossadegh, wanted control of its own nation, including its oil, economically as well as politically. The United Kingdom and with it nearly all of western Europe wanted to maintain its hegemonic oil bargain, imposed upon Iran. That influenced Mossadegh's government to work instead with the Communists of Iran, albeit gingerly, while continuing to stand for independence from the Soviet Union as well as from the UK. That legitimate government of Iran had previously banned Iran's communist party.

Iran nationalized its oil production, despite having been given a 50/50 concession from the fascistic Anglo-Iranian Oil Company (which later became British Petroleum and which later acquired Amoco, and under the nose of neo-Marxist Barack Obama, befouled the Gulf of Mexico). Instead of the western world supporting Mossadegh and its full independence, the communists filled the vacuum and America took sides with the UK.

Iran was embargoed and while Truman was hesitant to do the UK's dirty work, Eisenhower instructed the CIA to very deviously foment bloody revolution in Iran. That brought the reluctant but in numerous cases, brutal (especially to communists and militant jihadists) rule of the Shah. That in turn, brought in the anti-American (and vehemently anti-Israel) Islamist pseudotheocracy we have there today, thanks in part to, gasp, soft neo-Marxist Jimmy Carter and stone cold globalist, Zbigniew Brzezinski.

And yes, America propped up Saddam Hussein in Iraq, to counter the mess the U.S.A. in part catalyzed in Iran. And yes, we were then compelled to place our military in Muslim-sacred Saudi Arabia, to halt Saddam's attempt at his own empire. And yes, that in turn is the essential reason, as they stated over and over again, for Al Queda's attacks upon America.

Intrusion, blowback, intrusion, blowback, let us face the facts. Yet, as we do, let us not overreact like an inanimate pendulum. Barring emergency, should any foreign nations be afforded our communitarian foreign aid? Perhaps not even Israel. Do any nations, including Israel, deserve our potential military support, for (and not against) their national and Popular Sovereignty? Yes, we would have not remained the United States of America in the 1770s, were it not for the military aid of France.

When will we ever have a presidential candidate who sees all the problems and sees them in good perspective? Perhaps when we have a greater proportion of the Citizenry who do. And if that is so, will we, ever?