July 31, 2012
And have no fellowship with the unfruitful works of darkness... rather expose them.
- Paul's Letter to Ephesians, 5:11

The bizarre and destructive behavior of Democrats such as the Obama regime and its most virulent accomplices in Congress is inexplicable to mankind, until one sees it in the context of his being a saboteur of the American way of life and a globalist neo-Marxist. When one understands that, the light bulbs come on and the pieces fall into place.

Similarly, the perverse behavior of many Republicans is not to be explained, unless the explanation is their being the globalist neo-fascists and political spawn of tycoon tyrants of the Rockefeller ilk, who, with their Jacobin rivals, are financed by the same global network of central banks and their mammon-based overlords.

As we have just indicated in our mini-exposé of the Council on Foreign Relations (CFR) both forces join together, to bring about global authoritarianism and to put an end to what happened on July 4, 1776, called then and now, the free and independent, United States of America.

Classic cases in point are their collaborations in attacking and undercutting those Republicans who would yet stand for the Declaration principle of unadulterated sovereignty, in the face of their two versions of subversion and treason. Witness the case of Dick Cheney (as well as certain of the Bush family and so many others) in ceaselessly attacking Sarah Palin, as we now see via ABC News and The Hill.

Dick Cheney is a Rothschild/Rockefeller globalist, as are the Bushes (who historically, have been heavily involved in transnational finance, including grandfather Prescott Bush, who financed Nazis for what seems just as long as he could get away with it). In fact, a severely duped "America first" version of globalism has been a steadily developing theme of every Republican presidency at least since Nixon, if not Eisenhower. (Do you recall as do I, President Harding being ridiculed by elitists as one of the worst presidents in U.S. history? He ended the League of Nations scam.)

Dick Cheney is, in fact, a past director of the CFR. His quipping about that has become famous among patriots, as the video below shows. But before we go there, did you catch something in the video above about Cheney and the Rothschild complex's Rockefeller family? Cheney led the effort to name a vice president for Gerald Ford. It was the hideous subversive, Nelson Rockefeller. This video spells out the connection of Cheney to the infamous David Rockefeller and his cause of enslaving mankind to one-world authoritarianism served by gradualist trade agreements, which break down national sovereignty and establish transnational governance, as well as the redistributive destruction of American livelihoods.

For one thing, most Republicans hope to and/or expect to hear her speak at the upcoming Republican National Convention and are becoming disappointed. But beyond this, Palin has promoted Allen West, for vice president. I will go out on a limb and predict that the globalist financed, transnational progressive, Mitt Romney will not select anyone but a fellow globalist, elitist as his vice presidential candidate. This is no time for any maverick moves, in the puppet-masters' plans for the Massachusetts governor. And further, Palin's endorsements continue to be very influential in the Republican nominations and will likely be, in November's general elections. It is Congress that will have to counter further assaults upon U.S. sovereignty, in an upcoming Romney term. Palin is helping pro-sovereignty, nontreacherous candidates get elected. 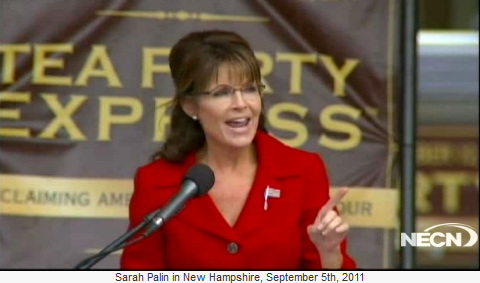 Gov. Palin's authentic gravitas has garnered a favorability rating that despite the the global mammon complex's continuous flood of ridicule, slander, and effete, off the cuff remarks, is higher than Mitt Romney's and of course, higher than those of George W. Bush or Dick Cheney. It has now risen to 53%. Palin calls for "sudden and relentless reform" in politics, and redesign of regulation for the sake of America and Americans.

This complex of neo-Marxists, neo-fascists, and tycoon transnationals are, instead, for the kleptocratic hegemony of the financiers of all the kinds of corruption now being fomented in the name of "civil society," "open society," "new world order," "sustainable development," and all the more tired Jacobin, Marxist, and neo-fascist shibboleths, such as "social justice," "egalitarianism," and "community among nations."

In short, Palin is not one of them and she is much too influential for them, in what is left of the sovereign American republic.

Cheney, doing the devil's work for the complex (or, the complex's work for the devil) has been a hound of Palin for quite awhile now. In February of 2010, he issued a warning from his perceived gravitas, when asked if she were qualified to be president. At the turn of September of 2011, just before Palin's announcement about seeking the presidency, upon being served a hanging curve question by Laura Ingraham, his words, "I've never gotten around the question of her having left the governorship of Alaska, mid-term. I've never heard that adequately explained." He must not have read much about the financial assassination of lawfare warfare, or of course he was just being disingenuous.

And speaking of disingenuous, you will find these same GOP taints of the complex, so patronizingly critical of patriots such as Palin the same ones who soft-soap Obama. Whether Cheney, Bush, McCain, Romney, etc., they refuse to admit to his obvious Marxist heritage, training, development, promotion, and behavior in office. That offends and tends to reveal those who sponsor them all, which in turn, reveals their own fig leaf covers. No, they are the "Obama's a nice guy, but in over his head," excusers of the saboteur in chief.

It is critically important for the kleptocrats at the top of the pyramid to run the Hegelian, Marxist game of the controlled dialectic, presenting itself in both the antithesis of the Democrat left and the Republicans' compromising into sythesis. It stands to reason, that is something we have "never heard... adequately explained," by the Quisling, false conservatives of mammon's right hand pocket. However a loose lipped tactician of the complex and mentor of Bill Clinton, Carroll Quigley, did explain it in part, in his book. As Robert Beaudine has shown in GulagBound:


In 1966, the historian Dr Carroll Quigley thought the international bankers were too powerful to oppose when he published his smug exposé, "Tragedy and Hope: A History of the World in Our Time." He wrote, "The argument that the two parties should represent opposed ideals and policies, one perhaps of the Right, and the other of the Left, is a foolish idea acceptable only to doctrinaire and academic thinkers. Instead, the two parties should be almost identical, so that the American people can 'throw the rascals out' at any election without leading to any profound or extensive shifts in policy ... either party in office becomes in time corrupt, tired, unenterprising, and vigorless. Then it should be possible to replace it, every four years if necessary, by the other party, which will be none of these things but will still pursue, with new vigor, approximately the same policies."

Future historians will wonder why we neglected to educate ourselves about a world dominated by an international elite, and why we never learned our lessons about our political class, who do their bidding with baseless rhetoric.


We do try to explain, to ears willing to hear and eyes, to see. The visitor will find more, at category, "Controlled or Duped Opposition" and "Rockefellers' Generational Curse," plus tags such as "Overton window," "Council on Foreign Relations (CFR)," and the aforementioned "Carroll Quigley."

Norman Dodd, champion investigator of Congress' 1953 Reece Commission laid it out in an interview by G. Edward Griffin, featured in our "Investigators of Globalist Conspiracy, Meet your Mentor, Mr. Norman Dodd." In studying the global bankster system and the subversion of tax exempt foundations such as Ford, Rockefeller, Guggenheim, etc., he discovered the Rockefellers and others more centrally plugged in with the central bank complex set out to ride the global Communist movement and controlled capitalism, each like a jockey rides a horse. Their finish line was the merging of these disparate systems, to bring about a globally controlled society, the ultimate monopoly for the gain of their progeny. How would they do that? By just what was occurring then and just what has been happening ever since. 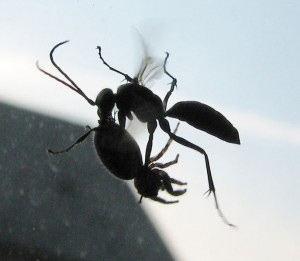 The Soviet Union and Red China have adopted the corporatist, crony capitalist system, just as Europe, South America, and of course, increasingly, the United States. In each case, the society which went before becomes the subjugated spider serving host to the parasitic children of the spider wasp, enslaved by the mind controlling venom and shadowy inhabitation of corrupt, financial dependence. It all becomes global fascism, "the administrative state" — essentially a return to the feudal system of master and slave, but globally as in the days of Nimrod and the Tower of Babel (see Agenda 21).

The words of Griffin, introducing his interview state it thusly:


This man will tell you that the real objectives include the creation of a worldwide collectivist state, including the Soviet Union, which is to be ruled from behind the scenes by those same interests which now control the tax exempt foundations.


Here are the concluding words of Dodd, to corroborate:


To them, communism represents a means of developing what we call a monopoly, as the organization of, we'll say, large scale industry, into an administerable unit. They will be the beneficiaries of it.


How does it come to pass that a self-purported patriot of American freedom such as Dick Cheney becomes a slave to the the global mammon complex? How does a spider hosting the wasp's young go out of his way to build a cocoon just for them?

That this is somehow a secret is a grand shame to America's conservatives.