May 13, 2010
Comments made recently by Mrs. Laura Bush in support of gay marriage remind me of a school visit she made early in the administration of her husband. She asked a young boy of no more than 8 or 9, from where our rights come. The boy answered correctly, and said God. Mrs. Bush then went on to create one of the first chinks between the administration and conservatives. She corrected the boy and instructed him that some rights come from our government. 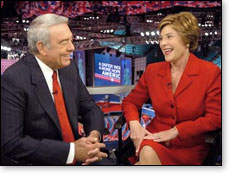 Laura Bush exemplifies why unelected family members of politicians should keep their views to themselves. Bess Truman and Pat Nixon understood that they were the President's wife, not a royal consort with public responsibilities and an agenda to advance.

Unfortunately, Laura Bush's secular, Kennebunkport worldview was reflected by the vast number of neocon appointees that staffed the Bush 43 administration. They were people decidedly more liberal than the views expressed by the President, and considerably more liberal than most of the grassroots Republicans that ensured his election. The volunteers from all over the country that I met working for George Bush in the snows of Manchester, New Hampshire in January 2000, were not the beltway insiders and consultants that got many of the key jobs.

Surrounded by Republicans more comfortable with the views of Christie Todd Whitman, than those of Ronald Reagan, Bush went on to trash the Republican brand with the largest big-government spending spree since the Great Society.

Ronald Reagan understood that one of the most important decisions he had to make as President, was his selection of a Director for the Office of Presidential Personnel. The extreme care taken by that office under President Reagan ensured an administration that was committed to conservative principles and of one heart and mind with the President. It is the key to why the Reagan Administration succeeded, and why two generations from the Bush family failed.