December 29, 2009
I just read the most interesting article ever in my newfound role as political activist. Having bought into the "Liberals vs. Conservatives" distraction for many years now, it was brought to my attention that our battle is not with one another. It's not whites against blacks, gays vs. straights, or even illegals vs. Americans. Those are simply distractions intentionally perpetuated by the Propaganda Media that too many Americans still watch every day.

No, the battle is not with one another, people. While we're busy arguing and fighting and protesting one another's call or missions, those who have bought and paid for virtually every Congressman in Washington D.C. are busy as bees, making their little puppets dance and sing and do whatever they're told to do, even when it opposes the will of we, the people. We, the people are no longer of issue to those who are elected to represent us. These nonrepresentatives have learned that our votes are not nearly as important as the money required to secure our votes through campaign contributions. Yes, we, the people have become like automatons who do whatever the Propaganda Media tells us to do. Lifelong victims of advertising, we've collectively forgotten that sometimes people aren't honest, particularly when there is money at stake, to the tune of millions, billions and now trillions of dollars.

We, the people, in our own little worlds with imaginary enemies (each other), are now all snugly holed-up in our little houses where we're safe from "them," who are really we, the people, too, while the government oversees what Propaganda gets fed to us day in and day out through the Boob Tube. We prepare our food in the mornings, watching whatever is dished out over the airwaves from day to day. We sit down to lunch and check 'the news" which is really comical that we even call it that anymore, all things considered. It's not "the news" anymore. It's "the propaganda" now. 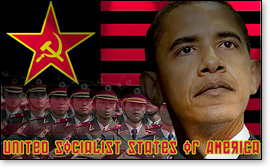 The Man Behind the Curtain stepped out into the open last year (2008), and we all watched while he (the collective efforts of NBC, ABC, CBS, CNN and MSNBC) launched upon us the most convincing $660 million dollar advertising campaign for a man, it turns out, who favors Communism over Capitalism and who was given a free pass not to disclose anything about his past, including his college records (sealed), his travel history (sealed) or even his birth certificate (sealed). This man, who is friends, it seems now, with nothing but criminals and Communists if you look at all of the "Czars" he's appointed in his effort to avoid Congress having any say in this administration. The $660 million dollar ad campaign which sold us on Barrack Hussein Obama did a great job at convincing us to hand our nation over to someone we didn't even know and still don't really know today. He is the Pet Rock times one million, a shadow of a person who has put in place a shadow government that we, the people have absolutely no say in any longer.

IT'S NOT THE 'THEM' WE THOUGHT IT WAS  So the Liberals aren't running this country right now after all. The Liberals live in our neighborhoods and work where we work and serve in stores and businesses throughout our communities, but they don't run this country and they are not our enemies. The Conservatives aren't either. They too live among us Moderates, also an integral part of each of our communities in the same ways as Liberals. The gays certainly aren't running the country right now, nor is the Black community, the White community, the feminists, the illegals or the Muslims. No, none of us are running this country right now, and in fact none of us has any say as to what our government is up to anymore.

We, the people, Black, White, gay, straight, tall, short, thin, fat, man, woman, white-collar, blue-collar, Mexican, Irish, Native American and mutt have been duped and are continuing to be duped every single day. Newspapers are full of lies. The news reports we get on the above mentioned stations are rarely anything except propaganda anymore.

The truth is out there. That's a fact. But no one is feeding it to us anymore because we so hungrily eat up lies and nonsense and propaganda that our Propaganda Media no longer feels obligated to tell us the truth about anything. No, there is far more money to be made from propagandizing our nation, as our own taxpayer dollars are being used to pay what used to be journalistic news sources for presenting propaganda in place of journalism. No, we don't get the truth for free on TV anymore. We have to pay for it, but fortunately we still have that option. The internet costs money but it is now the only source of real information (with very few exceptions on TV) of unbiased news reporting that America has left. The current Shadow Government is currently in the process of devising a way to take control of and/or shut down free access to the internet. "They," the true "they" in "they are out to get me" know that an uncontrolled internet has resulted in a huge groundswell of American patriots who see the truth, who are unhappy with the dog and pony show going in secret in Washington D.C. today, and who are not afraid to stand up, speak up and take action on behalf of one another, on behalf of our posterity, on behalf of we, the people.

It's definitely time to stop complaining and start getting involved in the political process, in the public school system which has become little more than a propaganda tool for our Godless government, and to connect with one another despite our differences in opinions about religion, sexuality, race or anything else that the Propaganda Media has found so convenient to use to separate us one from another.

United we stand. Divided we fall. That's a fact. I pray today that we find a way to become united once more.