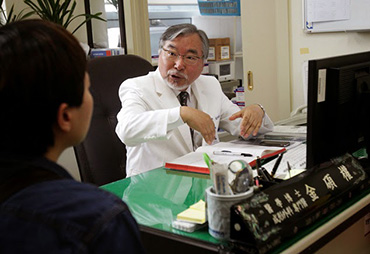 BUSAN, South Korea – This is the most arrogant statement ever uttered by any human being not caught up in Noah's flood but no doubt would have been had the flood taken place in this century.

Dr. Kim Seok-Kwun in Busan, South Korea, has made a name for himself by performing sex-change surgery on the gender confused. He boasts that he has performed 320 male to female to male operations so far.

In a revealing statement, Kwun, who is 61, stated THIS when he began his lucrative specialty; "I've decided to defy God's will," clearly showing in his own words that he knows full well that this is NOT God's will.

"What therefore God hath joined together (male and female), let not man put asunder (or meddle in God's work)." Matthew 19:6 which are the direct words of Jesus.

The rebellious doctor says that he is a pioneer in slowly changing views on sexuality and gender in South Korea where even discussing such things was taboo up until a few years ago.

Kwun states that he's correcting God's mistakes while feeling a sense of achievement for helping people who feel trapped in the wrong body. "Aren't these God's mistakes?" he questions in the jiu jitsu of a declarative statement.

This biblical misinformed doctor asks if people born without limbs, cleft palates, fingers stuck together are a mistake of God. "Why would God create people like that? Aren't these God's mistakes?" Kwun then says, "And isn't a mismatched sexual identity a mistake too?" Possibly a mistake for the ones going through it.

Mr. Kwun, pull up a chair. God created male and female which is forever. This cannot be changed. Along with his creation are strict guidelines for living. To respect these instructions result in a good, peaceful (even in the midst of chaos) and productive life. To defy these guidelines bring confusion, bad decisions and even sickness. But God gave us free will. He is not a dictator. One can make his own decisions and bypass what God would have us do. But that is not without cost.

Sexual deviation amongst homosexuals as well as heterosexuals, which exposes body parts to areas (they were never meant for), create venereal diseases which in some cases can be deadly. This all falls under the guidelines for living that God has given us. To go against these guidelines brings us into sin and God's protection can leave us. No, He doesn't zap us, he just lifts his hand from us and we're on our own.

It is to be noted that the deeply felt love the LGBT community expresses for one another and the passion in their hearts to live life according to a perceived gender identity is very strong. I have performed funerals for several of those in the LGBT community and those services were conducted with great understanding and love. God values EVERY life. And so do I.

However, wrong ideas can create warped thinking which plunges us into a puzzling darkness where we cannot even recognize who we are. This can bring about such confusion that mental and physical illness can result. Again, this is because of free will and our own actions, not a mistake of God. And He loves us all now, at this moment, the same as he did when we were that first born baby.

While God does not direct every birth, he is still there to show his love and protection for every baby that is born, no matter what circumstances precede it.

Some have suggested that Dr. Kim Seok-Kwun would qualify as God's mistake. No he is not even a mistake of God no matter what chaos he is causing amongst vulnerable people who are clinging to the edge of a cliff, trying to figure out life .

This has been a very trying couple of weeks. Bill Maher stated that God is a mass murderer, Stanford Scientist, Andrei Linde then said that God is a Physicist Hacker, The Islamic Community put up billboards in the mid-west stating that Jesus is Muslim (for more on this go to this link: http://revaustinmiles.com/index.php/more/535 ), and Noah turns out to be a homicidal maniac according to a new movie. Now we learn from Dr. Kwun that all the world's problems are due to God's mistakes.

I don't think so. It is time to take another look at ourselves.