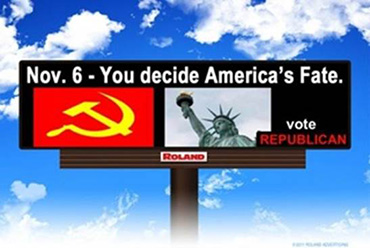 WASHINGTON, D.C. (8/11/14) The FBI and U.S. Intelligence officials have warned the White House and Congress of the intent of ISIS ((Islamic State of Iraq and Syria) to attack America on American soil. The do-nothing occupant of The Oval Office shrugged his shoulders and trotted off to another golfing trip vacation.

GOP Senator Lindsay Graham, who the democrats attack continuously, showed a video on a TV program yesterday (Sunday) of an Islamic State Militant stating: "We will raise the flag for Allah in the White House."

Senator John McCain said this on CNNs "State of The Union" program: "They (ISIS) have attracted 1,000 young men from around the world who are now fighting on their side. This ISIS is metastasizing throughout the region. And their goal, as they have stated openly time after time, is the destruction of the United States of America."

Senator Dianne Feinstein, the chairwoman of the Democrat Senate Intelligence Committee said: "It takes an army to defeat an army, and I believe that we either confront (Islamic State) now, or we will be forced to deal with an even stronger enemy in the future," she said Friday on Fox News. "Inaction is no longer an option."

These Islamic threats must be taken seriously. After the car bombing from the garage of the Twin Towers in 1993, causing considerable damage and some deaths, the Islamic Leader based across the river in New Jersey stated with disappointment, "We had hoped to bring down the towers. Next time we will." His bold statement fell on deaf ears. Then came 9/11 and the towers did come down.. The government slept through it all even thought the intent for the future had been boldly foretold.

ISIS, a brutal Islamic force, has put their focus on killing Christians. Yesterday, according to FRC (Family Research Council) they threatened Christian families to "convert (to Islam) by noon or we kill all of you." Thousands of Christians fled to the top of Mount Sinjar where 70% of them were tracked and killed.

It even gets worse. Sen. Ted Cruz of Texas said: "What ISIS is doing in Iraq is unspeakable; ISIS is the face of evil. ISIS right now is crucifying Christians in Iraq. Crucifixion is not something that just occurred 2000 years ago; they are doing it right now today."

The occupant of the White House (not president-a fraudulent squatter) has shown incredible indifference to the suffering of Christians being persecuted daily. He has not, nor will not, lift one finger to help or protect them.

Let this be clear: Obama was PLACED in the Oval Office for the express purpose of destroying America. His Communist handlers (CPUSA) found him in Kenya, his birthplace, and groomed him

He was born in Kenya, as the Kenya newspaper joyfully proclaimed when he managed to become a U.S.Senator. Shortly after I had found this on the Kenya newspaper's website, it was scrubbed along with the birth certificate. Too late. We saw it. When Jerome Corsi of WND went there to get more information, he met only rigid silence and hositility as the entire area covered up Obama's background.

Obama came here on a foreign student visa, and was put through University as a Foreign Student. He was never eligible to sit in the President's office. He was NOT voted into office even though an illusion was created that made it appear so. Most of those votes were fraudulent including thousands from dead people.

The CPUSA also manipulated that second Obama "election" and if this works out like the Communists plan, that would be the last free election in America. The plan is for Obama to use Executive Order to declare himself, Dictator for Life in 2016.

Meanwhile the cowardly republicans and democrats who are NOT members of the Communist Party, will do nothing to stop this madness, when they could have him properly REMOVED from office. He should be promptly ESCORTED out of that office which he hijacked and taken to Federal Prison.

As for ISIS: yesterday 8/10/14) Associated Press documented the stoning to death of 2 women in Syria by Jihad Islamic State Fighters, for alleged adultery (marrying a non-Muslim) in the city of Raqqa, the main Syrian stronghold of the Islamic State Group and the other in Tabqa.

Residents in those areas, under Islamic law (Sharia) are terrorized with beheadings,and cutting off the hands of thieves. One 14 year old boy was tied to a cross-like structure and left there for several hours in the scorching summer sun before bringing him down. His crime under Sharia law? Not fasting during the Muslim holy month of Ramadan.

This is exactly the kind of law ISIS intents to impose upon America after their planned attack. We cannot let this happen. Obama must be taken out of office NOW.

It is up to the people of America to bond together to prevent this. In November, even though the election will be rigged to favor the democrats, a unanimous strong showing of voters against this must be filed. That will give momentum for things to come to rescue America.

The photo above was provided by Helen Trautman of Pittsburgh. This is a photo of a billboard that is going up on Highway 321 in Lenoir City, Tennessee on October First. The alarm clock is set. Time to Wake Up !