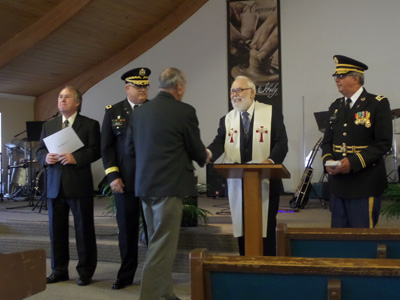 ANTIOCH, Ca 10/11/15 – The title, Chaplain, immediately stirs up one image – a military service spiritual leader. While that is true, the office of Chaplain is much broader.

There are Hospital Chaplains, Police and Fire Chaplains, chaplain-counselors on duty for schools, industries, first responders, suicide prevention, disasters such as fire and earthquakes, murder scenes, any and all types of emergencies, and even marriage counseling. They also conduct marriage ceremonies and funerals as well as guest speaking at various churches and civic organizations.

The office of chaplain requires total dedication as a minister. One must willingly give up all rights to themselves to immediately respond to any call for help, day or night. There is no such thing as a chaplain's convenience. They are there for the convenience of others who need them.

This is a totally devoted ministry and is a true calling. The Chaplain's Motto is: Stand Ready, Be Prayed Up, and Keep the Vessel Clean – that is, to live and be an example as God would have us be at all times.

Chaplains become deeply involved in their communities and who are on call 24/7 to help others at their time and place of need. The new chaplains who were certified on October 11th became members of East Bay Chaplains, located in the California Bay Area.

They took part in several weeks of class instruction, field work, and culminated at the Delta Stand Down at Antioch Fairgrounds where they served and counseled with homeless veterans with multiple needs during four days and nights. This highly successful program is in the process of going national.

The growing East Bay Chaplains are ready to serve wherever they are needed. There is no charge or expectations for their services. This is a labor of love, freely given.

A husband and wife chaplain team in this program, Chaplain Lacy and Richard Enderson, live in Simi Valley, California and upon being certified immediately became the chaplains for the mobile home park where they live, dealing with emergency hospital calls, visitation and services in the Recreation Hall including, so far, a Memorial Service and a wedding.

The five newly certified chaplains, as of October 11, 2015, live and will serve in the East Bay Area and or wherever else they may be called. They are:

The very formal and colorful ceremony, including the presenter in formal church attire, flanked by a General and a Colonel in dress blues was held in Antioch Covenant Church in Antioch, California.