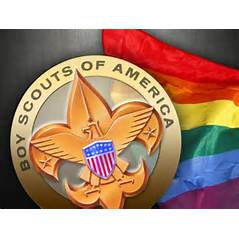 JEFFERSON CITY, Mo. – 3/24/16 – Thousands of cub scouts and boy scouts have been and continue to be violently sodomized by "gay" scout masters who are driven by such fierce lust for little boys that they cannot control themselves.

They take jobs such as that of scout leader in order to have easy access to vulnerable little kids that they can take on unsupervised camping trips, or even, as one scout leader famously did, invited scout members to spend the night in his home. And naïve parents allowed their little boys to go. One case in particular happened in Salinas, California.

John Brockdorf, Scoutmaster of Cub Scout Troop 62, was able to take a little boy home with him, sexualized him so violently that it tore the little boy's rectum, exposing raw nerves, leaving him in excruciating pain. He cried when he went to the bathroom because of that tear in his rectum which never healed.

However, that little boy never told his parents since his parents always considered him at fault no matter what happened. And don't think Brockdorf did not see this. He took full advantage. He sensed that his parents would do nothing because the little boy could not talk to them. That is how these wretched people operate. They are clever.

In a country led by Obama, the biggest advocate of the LGBT sub-society, it is no wonder that this could take place, providing unprecedented access to children by pedophiles. Obama has bathed the White House in rainbow colors to celebrate the Supreme Court ruling that same-sex marriage was a "right," and invited these deviants to The White House.

It should be no surprise that last week The Missouri Supreme Court ruled that the organization, The Boy Scouts of America, cannot be sued in any case of a cub or Boy Scout molested and raped by a "gay" scoutmaster.

In that cockeyed ruling, the magistrates ruled that state law only allows for lawsuits against the perpetrators but certainly not corporations or associations. WHOA! HOLD ON: It was the very corporation and association called The Boy Scouts of America that lifted the BAN of homosexuals becoming scoutmasters, opening to door for kids to be exposed to them. THEY are the ones who provided this buffet for sexual misfits to have their banquet.

Had that ban not been lifted, the depraved would not have had close access to these kids. The Boy Scouts of America is indeed totally responsible for bringing in these twisted mental cases, which put every vulnerable little boy in their care at risk. BSA is the organization that created that environment where little boys could be molested and raped. And they are not responsible? Something is very wrong with this picture.

The tenets for all scouts is to be honest, truthful, MORAL and trustworthy. At least that WAS the tenets it was founded upon. Morality now is nowhere to be found in the Boy Scouts of America because it is no longer an ingredient in society itself. Obama has virtually destroyed morality and is leading America on an immoral path straight to the devil's domain from which there is no return.

Look on the internet for alternatives to the BSA. Google 'Christian Alternative to Boy Scouts.' It is there and you can also find effective 'cadet' programs.

Remember John Brockdorf from above? He was beginning to be found out and left Salinas for New York where he quickly got a job with a travel service, now get this, working with young people. Sure enough, he tried to seduce a boy who COULD talk to his parents.

They had Brockdorf arrested and after he appeared in court was sentenced to prison. He wasn't there long. We were told that he was killed there by inmates who think that the lowliest of people are pedophiles, a species lower than themselves.

It is to be noted that once one has been molested and raped, they are affected for the rest of their lives. Some turn to alcohol and drugs and others are no longer sure of their own sexuality.

This affects any relationship they might have and some become sexual predators themselves. It is a monstrous crime that affects their victims for the rest of their lives, which Is why pedophiles must be given life sentences in isolation since they have stolen the life of their victims.

Meanwhile the Boy Scouts of America throws open the door for all of them to come in, be in charge of children, and the Obama administration's courts can protect them by making it law that such organizations cannot be sued. This is outrageous! But after all this is in the era of Obama. What else can be expected?