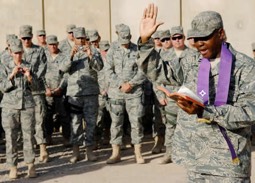 WASHINGTON, DC – 4/4/17 – SUCCESS! Because readers got out of their chairs and became visible by contacting representatives by phone, email and regular mail, office visits, sending letters to the editor challenging news reports, establishing a relationship with America's leaders and standing up to be counted, a major victory astonished the enemy.

Especially significant is that Communists do respect numbers. In this case they had the military chaplains along with 20,000 Christians to deal with demanding they uphold biblical values.

The voice of this minister-columnist has consistently echoed in the wilderness that Christians must take a stand and push back against the "progressives" who have, under Satan's instructions, tried to silence Christianity.

These leftist (Democrat-Communist) enemies of Christ had even managed to bluff authorities into making it law that military chaplains could not address sin when counseling, cannot pray for military personnel plus they can no longer say the name, Jesus Christ or God Bless you, even at funerals!

The 'progressives' have not only declared war on Christianity along with its morals, but indeed, they are attacking God Himself. Not a wise thing to do.

As you know, the democrats have even mocked, ridiculed and slandered our Christian Vice President Mike Pence, and for what reason? For being faithful to his wife, respecting his marriage commitment and for taking caution to not even give the appearance of evil. 1 Thessalonians:5:22

Yet the mentally deranged democrats find that very proper stand of responsibility as a husband a cause for ridicule? This clearly defines demoncrats (oops-typo) who feel they have more power by keeping the people weak by immorality. And this is what the George Soros Democrats are at war against. A moral society is a strong society.

This is the last thing Soros wants. A Christian's mind cannot be enslaved, making it impossible to move the U.S. into the Communist ruled One World Order.

The Christians have now firmly made their presence known, giving them power by their sheer numbers.

It is exactly like the time frame of the past election, people finally had enough and voted with strength of numbers to put a man in The Oval Office who would put a stop to this anti-American, anti Christian persecution. As the people spoke then, they are really speaking now, as 20,000 Christians stood up, stood firm and contacted everybody in Congress and the Senate. Twenty thousand people cannot be ignored.

The push-back finally manifested and Congress has now taken needed action to halt this attack on Christianity, its ministers, military chaplains, and what's more, they have gone on record to do so.

According to Charisma, a letter to Col. James P. Ryan, commanding officer of the 157th Air Refueling Wing based at Pease Air National Guard Base in New Hampshire, the bicameral group of congressmen and senators wrote of their support for this decision to maintain the chaplain's prayers at all military ceremonies. At last! CHEERS!

We write with reference to a complaint you received from the Freedom From Religion Foundation (FFRF) regarding invocations led by chaplains during Air National Guard ceremonies at Pease ANGB.

Established by George Washington in 1775, the office of military chaplaincy was designed to serve those in the armed services in a variety of ways, including offering a uniquely faith-based perspective on life and death issues. During consideration of the Fiscal Year 2015 National Defense Authorization Act (NDAA), Congress affirmed the spiritual leadership that chaplains provide to service members and military commanders alike as well as the role that chaplains play in facilitating the free exercise of religion.

As you know, these conscience protections have been implemented by the Department of Defense through two instructions ... These instructions make clear that expressions of belief are protected within the bounds of good order and discipline. Under these instructions, no service member may discriminate or take adverse personnel action on the basis of these actions by a chaplain.

We are deeply invested in protecting the mission-critical role of chaplains in the United States military. As such, we were pleased to see the following statement from the Air Force in response to the FFRF complaint:

The Air Force places a high value on the rights of its members to observe the tenets of their respective religions or to observe no religion at all. The Air Force is dedicated to maintaining an environment in which people can realize their highest potential regardless of personal religious or other beliefs. Chaplains provide, or provide for, the free exercise of religion, and we advocate its free exercise for every member of the Air Force and the joint environments.

There are no service restrictions preventing chaplains from praying according to their faith tradition. In certain circumstances, we encourage chaplains to offer inclusive prayers. Chaplains have consistently found the means to strike a balance between the tenants of their faith and the needs of the airmen they serve.

The religious guidance and service of military chaplains fills a fundamental spiritual need for our troops, promoting their operational readiness, success and overall well-being. For that reason, chaplains have played a central role in the lives of our men and women in the Armed Services for the last 240 years.

Among the most basic rights that Americans enjoy are the free exercise of religion, free speech and the freedom of association.

The Supreme Court recently stated, "It is an elemental First Amendment principle that government may not coerce its citizens to support or participate in any religion or its exercise". ... The court went on to state that "an Establishment Clause violation is not made out any time a person experiences a sense of affront from the expression of contrary views..."

The strong statement from the Air Force reinforces the policies and protections in place for service members and chaplains to freely exercise their religiously-informed beliefs, including the freedom of chaplains to adhere to the tenets of their faith as they perform and serve in all aspects of their ministry.

In today's culture in which religious freedom is under attack, we want you to know that your positive decision has not gone unnoticed. We look forward to working with you to protect the right to religious freedom for our service members and chaplains.

The letter was the product of a joint effort by Rep. Doug Collins (R-GA) and Sen. James Lankford (R-OK) and was signed by 15 of their colleagues in both the Senate and the House of Representatives. Collins, a member of the Air Force Reserve, is the only military chaplain currently serving in Congress.

"The Air Force has again acted with courage and wisdom in affirming that our service men and women have the right to observe their respective religions or no religion at all," he said. "Chaplains contribute to the holistic well-being of American troops, and to attack their role is to undermine the free exercise rights of all service members. I will continue to stand by Pease Air National Guard Base as it protects the freedom of the individuals who sacrifice to preserve the liberties of all Americans."

We must be vigilant and stand ready without hesitation to speak up and make our voices heard. Ministers are also charged with 'defending the faith.'