MONTGOMERY 12/12/17 – The Alabama Senate Election last night was RIGGED. George Soros had his Nazi boots on the ground manipulating every part of what was supposed to be a free election. 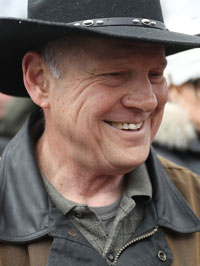 This columnist was watching a moving graph of the election returns coming in on TV showing the points each candidate was receiving as they happened. The election was finger-nail biting close all the way, sometimes, neck in neck, meaning TIED. This was consistent. Every vote was important.

Then, out of the blue, WITH ONLY 89% OF THE PRECINCTS COUNTED, Doug Jones was declared as "WINNER." Again only 89% of the precincts had their scores in. THIS MEANS THAT ELEVEN PRECINCTS WERE NOT COUNTED!!

The scores were so close that even one extra precinct could make a difference. George Soros has meddled in this election and again pulled a fraud upon the American people. But this time there will be push back.

Judge Roy Moore has NOT conceded, nor should he. The election was not over when the Soros controlled media basically stopped the free election process and dictated who the new Senator would be. And that would be a man who strongly supports abortion, gun control and open borders. Again, 11 PRECINCTS WERE NOT COUNTED. This is NOT over.

Stop the Presses! It is demanded that everything stop and a recount take place immediately. Otherwise our democracy will be no more and Soros would become Emperor of the world.

After the recount, it is time to charge George Soros for Treason and Sedition. He has tried to remove an elected president and overthrow our government. All the elements are there for the charges to be made. DO IT!