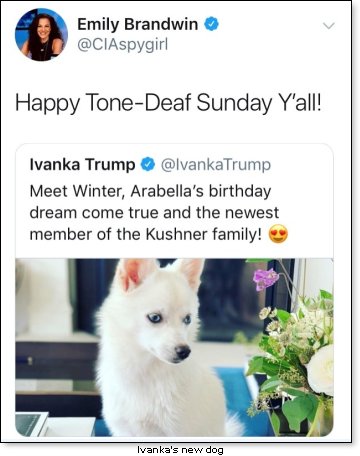 I almost choked on my coffee this morning when I got a message from a leading columnist with a clip that states that the Trump Family has now proved to be racist since First Daughter Ivanka Trump Kushner has adopted a WHITE dog! I kid you not. She got the dog for her daughter Arabella's birthday present.

Yep, this proves racism by golly. Now what do we do about The WHITE House? Who can forget Al Sharpton indignantly yelling, "Why do they call it the WHITE house??? Then there is the problem with White Christmas, White Washed and using white lights. We are all in big trouble. And now "reparations" are demanded for those who are NOT white but paid for by those who are. This is getting silly.

And does this mean that Ivanka's dog is racist since it is white? According to leftist tweeters and bloggers, it absolutely DOES prove the Trumps are all racists by getting a white dog even though the dog plays with black dogs. We have never heard of the website this was reported on, but it is one the leftists very much seem to know about and support. Their emails and tweets about using the pet pick as proof of President Trump's racism is compelling. Here is a link to that site where you can see the leftists' comments:

Years ago I heard of a little black boy who hated being black. One day he got some white paint and his parents came in to see him putting it on his face, hands and arms. "Wha chu doin? demanded the father. "I am now white" said the boy defiantly. Outraged his father grabbed him yelling, "Who are you to disregard your proud black heritage?" At that his mother joined in flailing the kid with belts, then they stormed out of the house. The little boy knelt on the floor, clasped his hands and cried, "Dear God, I've only been white for 10 minutes and I hate two blacks already."

Nowadays anything you do can make you a racist. President Trump, furious at the anti-American stance taken by four congresswomen, answered, "Then why don't you go back where you came from? The democrats and their newspapers all yelled that the comment was....now brace yourselves.....RACIST. What is racist about telling someone who expresses hatred for America to go back where they came from where they would be happier? Racist, is a term used by every Democrat and the so-called 'news media' as the death knell for any and all opponents who have a different idea as to what makes America Great. And it is a contest between good people, and Communists.

Of course, all of this is agitation is caused by George Soros to weaken America by spreading chaos amongst all people. If it were not for Soros, blacks and whites would get along much better. This writer would like for all of us to see any group of people, not as some being black or white, but simply see them as....PEOPLE.

Thanks to stellar columnist Kelleigh Nelson for alerting us to this latest burp from the left.