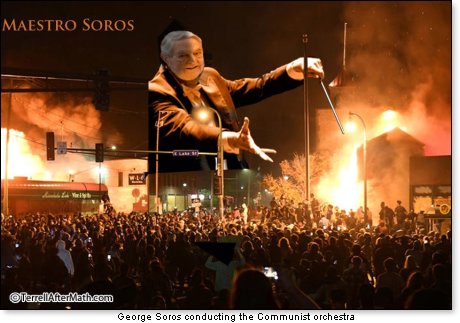 While everyone slept, the Communist Party slipped in and took control of America. The action was and is subtle at the moment, but this is now a reality, something I've warned readers about for years. How this was accomplished was somewhat ingenious.

Enter Billionaire Bill Gates who thinks he is the leader of the world due to his computer success. Gates believes that the population of the world must be drastically reduced by 350.000 thousand people a day. The use of the word euthanized creeps in.

Gates was close to Dr. Anthony Fauci who also has illusions of world fame. Gates gave Dr. Fauci $1.3 million dollars to take to the Wuhan, China Lab for the purpose of creating a deadly virus that would take down the world. The Chinese not only created the virus but also "accidently"released it in order to put the world under their control. It is interesting to note that George Soros is an investor in that Chinese lab.

As the Coronavirus covered the earth, the Communists began issuing orders to the world in the form of, "medical orders" that told all people that they must be quarantined, wear masks, close all businesses( so as not to spread the virus), and dictate when one can reopen their businesses and where they can go. People cannot gather together. They must stay six feet away from each other. The Communist Party was and is now giving all orders of movement to The United States of America. That was always their desire which they now have accomplished.

Their particular target is the churches and Christians. They have bulldozed churches in China to the ground, and smashed down every standing Cross in the cities and towns throughout China.

This writer has desperately tried to awaken people to the severe threat Communism brings to a society. They have tried for years to bring the U.S. under their control, especially since America is the only country standing in the way of a total One World Communist Order. The church and Christians were the barricades against it.

A Christian mind cannot be enslaved because that mind belongs to Christ which makes it difficult to manipulate, overpower and control. Christians will not worship a political entity, which is required in Communism, but we worship only God and Jesus Christ. Anyone who refuses to worship the Communist Party is considered a threat to social order. A Communist is totally loyal to his ideology, and gladly gives 38% of his or her paycheck to The Party.

However, the Christians also are totally loyal to their cause as well. This is a problem for the reds. The first things Communists want to eliminate is Churches, church services and Christians. It began subtly as newspapers, owned by George Soros, began to spotlight stories about misconduct in the churches. Soros actually paid nitwits who could get negative stories about churches, Christians and ministers into the media

An example of that was that nut group from Kansas City called The Westboro Baptist Church (which was neither a church or Baptist). As you remember, they picketed the funerals of service men and women (war is evil doncha know) causing chaos instead of soothing grieving people. They were paid handsomely for their theatrics.

This kind of staged publicity made the church look worse and worse, which was the idea. To get people away from church. And by calling themselves a church, they doubled the impact on the people they tried to influence.

Then, LAST WEEK!! A Chicago church, Cornerstone Baptist Church, was in the midst of a service when police arrived and banged loudly on the front doors. Again that service, which was taking place, was interrupted by the police. The pastor, Courtney Lewis, stated that there were three police cars, two unmarked police cars, and, now get this, a representative from Chicago Mayor Lori Lightfoot's office.

Pastor Lewis told reporter Todd Starnes that this was "like the Soviet-style KGB." An usher outside the church reportedly saw the mayor's representative trying to force their way into the building. They did not get in but began taking photos of the church attendees outside arriving for service. Talk about intimidation.

According to The Daily Wire, Pastor Lewis outlined how his church "has gone out of its way to follow CDC Guidelines," including having online services, outdoor services and practicing all social distancing requirments. We are even taking members' temperatures on the way in our church doors." He added. "We are not allowing the elderly to attend service."

But that is not enough for the Communist bullies. 'We tell you what do to and you do it' is their mantra.

So yes, at this moment, while we slept, the Communists have actually taken over America. But we patriots can strengthen our back bones and put a stop to this outrage. Indeed we must.