Stanley Zir
God, tyranny, and the rule of law 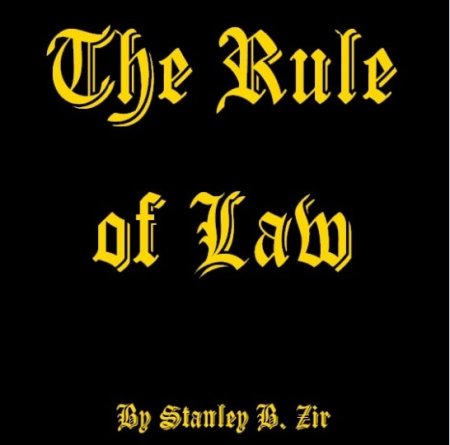 As an activist with over 30 years of trying to bring clarity to the unique wonders and remarkable awesomeness of our American Constitution, the soul of these United States, I cannot tell you how many times I have been asked to define the intent of our Founding Fathers. Each and every time, I’ve offered the same simple answer because, after peeling away all of the philosophical, scholarly, academic, legal and political concepts, the only one that makes perfect sense is having a true understanding of the Rule of Law. Just as Rabbi Hillel explained the extensive teachings of the Torah to a non-believer as “That which is hateful to you, do not do to your fellow man, the rest is commentary”, I use the simplest explanation of the Rule of Law as the one unifying concept that sustains our freedoms. Inevitably, the reaction of my astounded inquirer is “Why didn’t anyone explain this before? It can’t be that simple.” But, contrary to the ramblings of all the pundits, it is that simple. Moreover, once armed with this knowledge, every citizen can stand proud of America, and confident enough to unite with others to keep it free.

Focusing on the Rule of Law, as I will explain it below, supersedes every war, every administration, every political party, every amendment, every vote, indeed everything and anyone who tries to inculcate his own ideas or interpretations, or more recently to spin it any other way.

Contained within the Constitution is the definitive and iron-clad basis from which all decisions regarding policy stems. The Constitution is the DNA of our country. Imagine having the genetic code that, when alerted to an impending violation or threat, signals the cell to raise an impenetrable shield, eternally protecting it from any outside "virus" intent on its destruction. That is the purpose of our Constitution and its shield is the Rule of Law, created by visionary forefathers to protect us from any threat, domestic or foreign, bent on eliminating our rights and freedom. It is because our Founding Fathers, enlightened prophets, had the foresight to understand that these rights of humanity, these freedoms not yet known to any other nation, would be so unique, so overwhelming and in such opposition to the prevailing laws of the established governments then, and into their future, that they would immediately become primary targets needing eradication by other nations, kingdoms, emirates and other governments, who did not hold their citizens to such monumental standards. The establishment of a new government “for the people, by the people and of the people” steeped in humanity, freedom and God-given rights would forever be a treasure to those it serves and would need to be fiercely protected by those who benefit from it.

U.S. history began with a firm stance against tyranny and it remains our mission in the world today. This unapologetic stance against tyranny is our Rule of Law and guides our battles and our policies. Our Rule of Law is the power source from which our nation gains its strength, its invincibility, its clarity of purpose, its moral compass and its indomitable and enduring spirit. The Rule of Law is our core value and the glue that binds us to liberty’s decrees. Do not be misguided by what is commonly given as the definition of The Rule of Law. It is not the laws we use to make other laws. It is much deeper, much more intrinsic to our Nation’s soul. It is the philosophical foundation of all our laws; the gold standard to which all our laws must rise in order to make those laws constitutional decrees. The Rule of Law provides the catalyst that dispels instantly any misunderstanding of what America’s mission is and what makes her exceptional among the nations. This Rule of Law is encapsulated in the United States Constitution and its unrelenting stance against tyranny and oppression. This is what defines America’s just purpose and noble cause in the world and makes us the envy of every nation on Earth.

In a nutshell, our Rule of Law is our firm stance against tyranny. Where the biblical commandments end is where the Rule of Law begins. It is the Biblical departure that segues seamlessly into the American Constitution. The intensity with which our Constitution was created with the sole purpose to prevent and block tyranny, can only have been divinely inspired and manifested through our prophetic Founding Fathers,

Without the Ten Commandments, the underpinnings of moral advancement in humanity, we would not have had the ethical imperative that produced the laws that framed our Constitution, without which the ideals that our Republic adheres to could never have been actualized.

Once we lose sight of the purpose of our Nation's existence, we lose our identity and our grip on victory over global tyranny. We are the defenders of liberty. We do not bow down to kings or take our marching orders from the United Nations. We are here to rid the world of tyrannical enterprises, not to prop them up and make them our partners in peace. And most importantly, we do not abandon our allies, especially Israel, with whom we have a shared destiny since both nations are bound by the Covenant and a Constitutional decree.

It is these same ideals, embraced by the Covenant that Abraham received from God, that bind America and Israel to a common endeavor, the ongoing quest to secure a world, free from tyranny and the forces of oppression.

This is not a discussion about a particular religion, nor is it a sermon about a particular faith, as we know our Constitution clearly delineates our religious freedom. The Bible introduces us to the destruction that ensues through tyranny when Man, instead of honoring the sovereignty of God, uses his mortal power to lord over and represses other humans, demanding their sworn allegiance. Nations and leaders, who worship God in their own image and praise Him though acts of murder and oppression, stem from that original seed of tyranny,. These are the fallen ones who have essentially declared war on God, hyper-elevating their own importance and determined to bring the downfall of all humankind by denying them their rights endowed by the Almighty.

One doesn’t have to be a scholar of history to see how tyrannical enterprises, both secular and religious, have caused devastatingly dehumanizing and hate-filled manifestations all over the globe. One does not need 20/20 vision to see the envy these nations have for our Constitution and the human rights and freedoms it provides. Clearly their Rule of Law is Tyranny. Now, here is the key to your own enlightenment. If you stand against tyranny, you stand with God.

Each time we pledge “One Nation under God” we are reminded of that divine connection for those who stand unremorsefully against tyranny, and stand with God. Simply put, a tyranny exists when the leader believes he or she stands above God, where the citizens worship the leader or the government in place of God. Our Rule of Law stands in direct opposition, uniting its citizens under God, and against tyranny. I believe that it is only with this complete understanding that we can unite our divided nation.

Today, we hear people talking about saving the soul of America. We hear it from both sides of the aisle. What we are facing, however, are events that will shape or re-shape the face of humanity forever. Situations arising in America are so erratic that the boundaries that separate reason from irrationality, democracy from tyranny, and free market economies from a global government- controlled collective, are threatening to be erased and be replaced by the forces of deceit and duplicity. Sadly, these groups blinded by fast-talking, neatly packaged, noble sounding and cleverly disguised con artists, do not hold the Constitution as their beacon nor respect those who fight to uphold its honor.

Take a good look at those who are protesting against America, who do not believe that America, at her very core, is great. They decry President Trump’s belief in and vision of the greatness of America as if our reason for existence is easily dispensable. These unenlightened people are embracing the politics and rhetoric of already failed tyrannies. They are Marxists and Fascists in sheep’s clothing, whose blind actions are set to destroy America from within. We cannot let this happen. No matter how well-intentioned these ideals may appear on the surface, the only possible outcome, when the foundation is not based on the Rule of Law as I have described, will be a shipwreck on the shores of tyranny where oppression, repression and suffering will exist.

To save the soul of our Nation, we must keep our eye on our reason for existence, our noble and just cause. That is, was, and will always be our firm stance against tyranny.

With the Constitution as our guide, and faith in our destiny as providence's design only then can America-take her rightful place among the nations — the leader in a global conflict to free the world of fear that the disciples of tyranny and fascism bring.

Special thanks to friends and family who have provided me with their endless encouragement and wisdom to complete this endeavor, especially to Dr. Sandra Alfonsi, David Brodsky and Brian Calderone.