January 4, 2013
As the Sandy Hook students returned to class recently, the horrible tragedy there recently brings to mind a movie from long ago. In Rebel Without A Cause, a mentally unstable teenager shoots another teen and holes himself up in a planetarium. After a standoff in which another teen, played by James Dean, unsuccessfully tries to tell police that the teen's gun has no bullets, the teen gets killed by police. 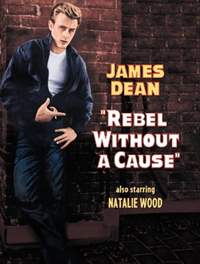 There is a lot of raw emotion and symbolism in this movie, made in 1955 and afterwards placed in the Library of Congress's National Film Registery for its significance. Various kinds of vice can be pointed out as causes of these youth's anger that bear some resemblance to the Newtown tragedy: the lack of a father, the taunting by gang members, disagreement with parents, and the easy availability of a gun from the boy's mother.

But there is one scene that sheds light for us: in the beginning of the movie, the youth attend a show at a planetarium on the violent death of the universe. In it, the teens are told very plainly that the earth is just a tiny speck of dust in the universe. No mention of God. In the end, the earth will be snuffed out like everything else.

It points our hearts

What a letdown. It's true that there is a great wonder in the immensity of stars, planets, and the hugeness of space. It's a part of nature that points our hearts — even if we don't realize it — to the immensity and greatness of God. And yet, the planetarium show leaves that aspiration unfulfilled — it mentions nothing beyond what is material.

Sound familiar? The message here is just like that which comes from our public — er, government — school system. The earth and all that is in it is awe-inspiring, but at the end of it all, there is no God behind it.

If we're looking at causes behind rebelliousness and discontent in youth today, any number of causes can be justly cited. But one that is easily solvable would be to have our public school system to acknowledge the existence of God and a moral universe.

And yet the modern mind has been shaped to think that it's only proper if the issue of God and morality be kept out of public schools. The First Amendment is often cited, "Congress shall make no law respecting an establishment of religion...."

But the scoffers leave out what comes right afterwards: "... or prohibiting the free exercise thereof...." Um, let's think about this. Just imagine that the parents of the children in Newtown wanted to have prayers in the school; wanted to have the Ten Commandments in their kids' curriculum; wanted to have teachers speak favorably about Christianity now and then. Wouldn't this be the "free exercise" of the community's religion? Shouldn't their wishes be respected? They are paying for the school through their taxes. Shoudn't they have some say-so in how their kids are being taught? Shouldn't parents and the local community — not the far-distant Supreme Court — be allowed to foster the culture in which they want their kids raised?

And yet, the critics glibly tout that religion and values are best left to the home, church or other organization. Wait a minute — isn't the school an extension of the family? Is it really possible to be "religion neutral" in fostering a truly human culture? If atheism is better, why? Why was prayer and Christianity yanked out of school in the early 1960's? I don't recall any studies at the time pointing to any dangers of Christianity. Where were the scholars, the experts, the ivy-league professors, showing evidence of how wonderful life could be without God? Without teaching a universal right and wrong? Show me the proof.

We cannot change, in one fell swoop, all of the societal conditions that led to such school violence such as at Sandy Hook. Why not begin where a lot of our culture is put into place — in public schools? In an education placed under the direction of parents and the local community? Not by some ivory-tower judges in a far-off place who have lost touch with reality.