The psychiatric professions have testified in numerous courts from the mid-1970s forward, that those who engage in homosexuality are mentally normal and make an equivalent contribution to society. This is in line with the 1948 dissembling of the Kinsey team that they had proved ‘over a third of US men had engaged in homosexuality to orgasm.’

In truth, their data and every major study through 2015 reported homosexuals more frequently criminal. The Kinsey team interviewed thousands about their sexuality, including the then-largest sample of homosexuals. But that Kinsey’s team engaged in homosexuality and wife-swapping or that Kinsey had sex with most of his gay subjects was hidden. Concealing their activities was key to their message that ‘if so many do it, why is homosexuality illegal?’ Most of Kinsey’s negative findings about homosexuals didn’t see print until 1979 (some in 1997). The facts about those who had ‘never been convicted of other than traffic violations’ had to be suppressed lest they jeopardize his contention (soon echoed by the psychiatric professions, and y even by medical associations) that homosexuality was a neutral characteristic. Homosexuals’ greater criminality obviously strains the narrative that their social influence is benign. And that the Kinsey team engaged in homosexuality casts doubt on their ‘objectivity.’

This was not merely being ‘booked’ but full-time criminality. As detailed in FRI newsletters, homosexuals in positions of power in the psychiatric professions worked to get Kinsey’s claims accepted and get homosexuals viewed as victimized by society rather than victimizers. Was Kinsey’s finding of greater criminality anomalous? What if children were followed from birth, would those who went into homosexuality be also more criminal? 1,007 children born in Christchurch, New Zealand in mid-1977 were tracked and interviewed regularly until age 21. [1] The 2.8% (11 men and 17 women) who were gay or had homosexual sex were about 5 times more apt to have depression, generalized anxiety disorder, conduct disorder, nicotine dependence, other substance abuse and/or dependence, and to have multiple disorders. So these homosexuals ‘fit’ the general pattern of previous studies in being more disturbed. As to crime:

The homosexually-inclined were more apt to engage in criminality.

Is the US Government being ‘fair’ with its research? We examined one of its largest efforts – the National Survey of Drug Use and Health [NSDUH].[3] FRI had examined the 1996 iteration (with 12,381 respondents) and found gays more apt to be criminal and to drive under the influence.[4] The LGB population grew from ~1% in 1996 to about 5% of the ~40,000 respondents in 2015. Would the additional subjects ‘dilute’ the finding?

No. Homosexuals, as in the 1996 iteration, were more frequently criminal and to drive under the influence. The Tables below (in %) are separated by sex and preference. Gays were the most criminal, lesbians about tied with straight men, and straight women the least so. 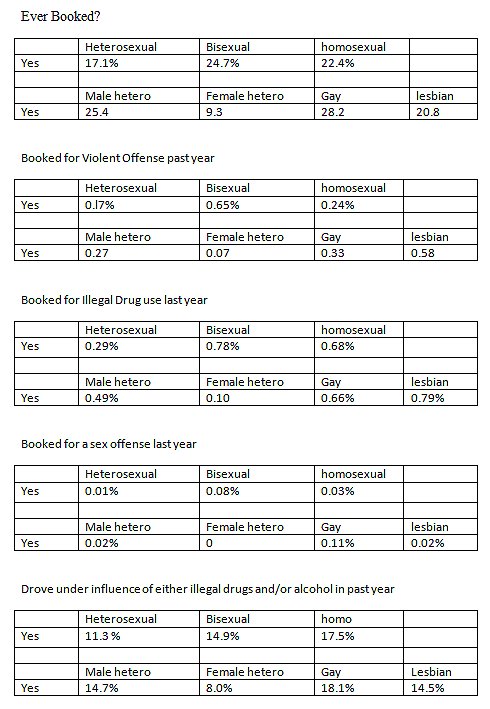 As the Table below shows, there were also differences between normals and ‘sexual minorities’ in mental illness, substance abuse, and receiving treatment. Men scored more socially disruptive than women, while women scored more unstable. The homosexually inclined appeared to exhibit the less desirable aspects of men and the less desirable aspects of women. 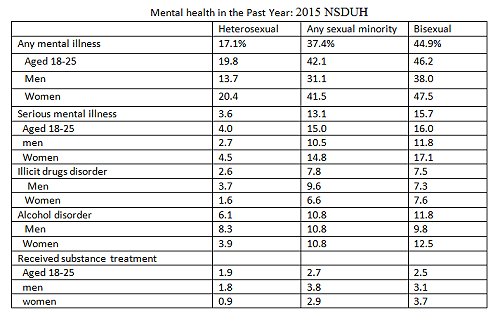 Even while promising to aid LGBTs by every means, Health and Human Services [HHS] regulations acknowledged some of the consistently negative findings associated with LGBTs:

Overall, LGBTQI+ individuals report being in poorer health than non-LGBTQI+ individuals. [and]…, moreover, are at increased risk for or are particularly affected by certain health conditions, including sexually transmitted infections, Human Immunodeficiency Virus (HIV), obesity, conditions associated with tobacco, alcohol, and other substance use, and mental health conditions, including suicidality. LGB people are more likely to acquire a disability at a younger age than heterosexual individuals. (HHS 2022 Regulations for Health Care 3/2/22, p. 32)

That is, in addition to all the faults acknowledged above, the evidence collected in the 2015 NSDUH might well have had Health and Human Services note that LGBTs reported being more criminal, more frequently endangering their fellow citizens by driving under the influence, and more frequently involved in sexual offenses. But then arguing that homosexuality should be considered ‘equal’ to heterosexuality, and teaching that to schoolchildren would be even more difficult. In any case, the US Government has joined Kinsey in failing to publicize its negative findings about LGBTs (with the 2022 exception above).

While some of LGBT’s mental health problems might be attributed to others rejecting them, how one attributes their additional criminality and endangerment of others to rejection is obscure. Then, if one adds in LGBTs’ more frequent child molestation, disease-spreading, and lower fecundity, arguing that LGBTs should be treated equally to the more healthy, less costly, and more productive becomes a serious intellectual challenge.