July 4, 2013
B.S. WEDNESDAY ~ Who do they think they're fooling? Obamacare implementation is being pushed up one year and why, again? Let's be honest: It's because midterm elections are coming and both parties know that if they implement this useless monstrosity of a cash cow, Tea Party candidates will SWEEP the 2014 elections! Both parties have been complicit in implementing this useless piece of garbage that doctors are running from because there is so much pork in Obamacare that isn't even related to health or insurance, like the way they are creating an army of IRS agents to oversee you more closely. Then there is the fact that no one knows what is in the bill or how to implement it, and yet hundreds of these pretend "representatives" of ours voted for it! 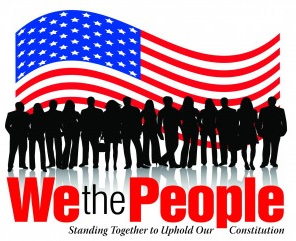 Then, on this B.S. Wednesday we have CIA Director James Clapper suddenly clarifying for us, after he lied to Congress, that – Ohhhhhhh, he was being asked about metadata collection? Why, he thought they were asking about CONTENT collection! The truth is the man lied under oath to Congress and the man should be charged with perjury right now! Has anyone from either party called for charges to be filed against this perjurer? Did you see the interview with Clapper? It was obvious he was lying. Ray Charles could have seen the man was lying. He couldn't make eye contact with the interviewer, kept looking down – classic signs that a person is lying, and now he admits he lied...and no one is calling for charges against him? Not a single Republican or Democrat is asking for perjurty charges to be filed against Clapper? What does that tell you? In a word, IMO: collusion.

ABANDONING THE DEMOCRAT/REPUBLICAN PARTY – After 5 years of serving a party which I once believed could be salvaged, I stepped down as Communications Director for the local GOP Central Committee. After watching far too much 'politics as usual' being practiced recently by those with whom I stood and served for so long, I realized that even at the local level, there is no real party of principle unless the individuals are principled men and women. I opted to step down and have re-registered as "Independent/Tea Party," and have now begun a campaign to encourage others to abandon both major political parties. 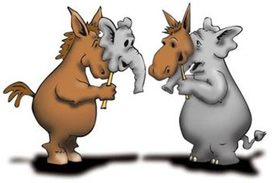 After decades of self-serving politicians and the corporate takeover of both parties, I have joined the fastest growing party in America, the party that the Obama administration purportedly instructed the IRS to discriminate against. We all wondered what happened to the Tea Party after the sound trouncing Tea Party candidates gave their Liberal/Progressive counterparts in the 2010 elections; now we know. The IRS refused to approve any 503c applications for Tea Party applicants, or those with "patriots" in their name or description. As I watched my local GOP begin to adopt what I consider unprincipled practices, the IRS discrimination came to light, which suddenly filled my sails and made clear my new purpose.

Is anyone but me ready now to throw these criminals out of office? Both the Republicans and Democrats – virtually our entire government leadership – is corrupt. They pass bills without even reading them? Are you freaking serious?!? Again and again, bill after bill, thousands of pages long, and these charlatans pass these bills without even reading them! My goodness, I am so done with this bizarre dog and pony show called the Democrat Party and the Republican Party. American has gone back and forth, electing the Democrats, then the Republicans, then the Dems, then the GOP again. They pretend to be two parties but they act as one. The bottom line is that neither party has solved ANY of our most important problems: No balanced budget. No border control. No immigration solution. No efficient nationalized healthcare system. The unemployment rate is still unacceptable. These two self-serving PARTIES are not solving our problems! In fact, what they have done for the past 5 years is intentionally tried to divide We the People even further! Obama is now known as "The Great Divider" because his efforts are unsurpassed in pitting Democrats against Republicans, whites against blacks, Muslims against Christians, gays against straights. It is wrong, this approach to leadership that this administration has taken. 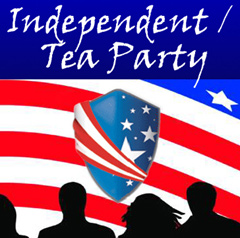 Please consider re-registering to vote as Independent/Tea Party members. Let's throw these jackals out, once and for all! Here is a link to online voter re-registration and it takes about one minute to re-register. I know because I did it myself: http://IndependentTeaParty.com/ ~ We can rid ourselves of these two sick parties once and for all. Please join me.

SAVING AMERICA: "Who will save America?" ask many right-minded Americans. Other Americans are left shaking their heads, asking "Save America from what?", and seem sincerely baffled by the concern. In a nation more divided than anytime in history since the First Civil War, Americans are about as confused on this issue as we can be. Some citizens believe the USA is under attack from the inside, and others believe the nation is being saved by the very same individuals. It is as if some Americans have been brainwashed; that is how distinct this divide has become.

The Obama administration is now using the mainstream media as the "Communications Arm" of the U.S. government. Conflict of Interests 1-3: Jay Carney has a close relative that works for the mainstream media. So do several others who are high-up in the Obama administration.That should be disturbing enough to get rid of these so-called wannabe representatives that only represent themselves and their corporate interest buddies. It no longer matters if the D's or the R's are in office. Neither party is serving We the People anymore. Neither party is solving our nation's problems. Both parties are self-serving and corrupt. Bush gave $700 billion to his friends on the way out the door. Obama gave $700 billion to his friends on the way in the door. Both fought/are fighting the same wars. Neither solves any of our problems. It's a charade, folks. It's the Truman Show and We the People are playing the part of Truman.

Again, We the People can form the largest political party of all as "Independent/Tea Party" members with a bottom up structure, like it's supposed to be. No corporate headquarters, no staff and no big party budget. Please consider re-registering right now and send the message that we don't need these two parties any longer. They have outlived their usefulness. In my opinion, I'm done with both the D's and the R's.

To re-register online or print/mail your voter registration form, please go to:

http://IndependentTeaParty.com and God bless you for helping We the People overcome this sickness that is plaguing our nation right now. 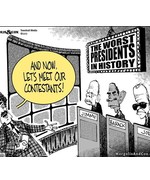