Amy Contrada
The turning point: lawless "gay marriage"
The rule of law was killed in Massachusetts in 2004. The judges and Governor got away with its murder.

July 10, 2015
Much has been written on the unconstitutionality and irrationality of the Supreme Court's Obergefell "same-sex marriage" opinion. Will governors and officials around the country kowtow to the Court and allow lawless same-sex marriage in states where it was banned? Will they imitate the disgraceful Massachusetts model? Will citizens allow this to happen?

The turning point for the radical effort to impose "same-sex marriage" (SSM) on the country was the 2003 Goodridge case in Massachusetts. There, the homosexual activists pioneered using the courts to circumvent the democratic lawmaking process and took advantage of an ambitious governor to implement their dream.

In November 2003, the Massachusetts Supreme Judicial Court opined that the state constitution (written by John Adams in 1780) guaranteed same-sex couples the right to marry. As I pointed out in my book (the only documentary history of how SSM came to Massachusetts), the Court had no constitutional authority to rule on the issue, and even acknowledged it did not have the power to change the law or order the other branches to comply with its opinion. It asked the Legislature to rewrite the marriage laws over the next six months to allow for same-sex couples, but that never happened. The state marriage law to this date has not been changed from one man + one woman, but that didn't stop Governor Mitt Romney from ordering state officials to issue marriage licenses to same-sex couples in early 2004.

Where was the national outcry from strict constitutionalists or the pro-family establishment? Where were today's teeth-gnashers (distraught over Obergefell) when we needed them in 2004? There were only a few brave commentators and activists (besides MassResistance, then called Article 8 Alliance, and Ed Pawlick of The Massachusetts News) who dared to advocate removing the judges, and challenged the governor to stand his constitutional ground. 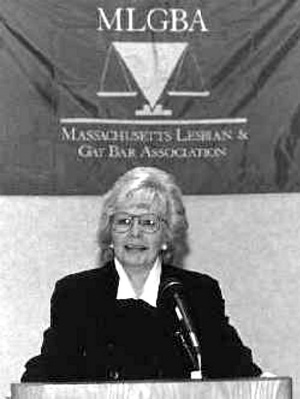 Prior to the 2003 Massachusetts Goodridge ruling, Chief Justice Margaret Marshall was keynote speaker at a fundraiser for the Mass. Lesbian & Gay Bar Association, where she advocated extending rights for gays and lesbians "even absent any specific constitutional mentions." Though her bias was evident, she did not recuse herself (as required by the Massachusetts Code of Judicial Conduct) on the Goodridge case. And she got away with it. Similarly, US Supreme Court Justices Kagan and Ginsburg should have recused themselves on the Obergefell case due to their bias, but did not. Will they also get away with it?

Those few commentators who saw the bigger picture and spoke out deserve recognition: Phyllis Schlafly, Pat Buchanan, Professor Hadley Arkes, and Dr. Alan Keyes. (Both Hugh Hewitt and Maggie Gallagher got it right at first, urging Romney to ignore the ruling, but both later joined the Romney camp.) National organizations working at first to stop the insanity were Liberty Counsel, Thomas More Law Center, the American Family Association, the Traditional Values Coalition, and Concerned Women for America. But they soon left the battlefield. 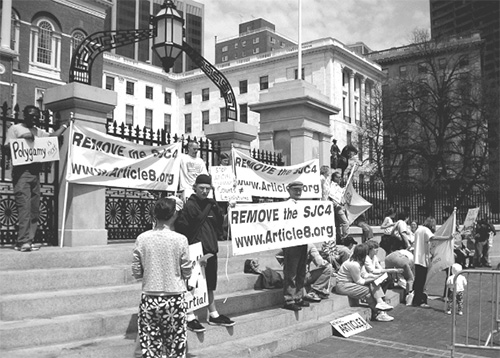 Sign on far left warns, "Polygamy is Next." For that, we were widely ridiculed.

The national conservative legal groups' early constitutional challenges failed. Other responses were (1) pushing to remove the judges for their overreach, and (2) urging the governor to ignore the ruling and do nothing to implement it, since the marriage law had not changed. (The Legislature sat on its heels, purposely evading responsibility – and they hoped, any blame.) But only MassResistance tried to force these actions. We filed bills to remove the judges, and to declare any "same-sex marriages" that might occur null and void (being without any statutory basis). Our bills were roundly ridiculed or ignored.

Only a few religious leaders had the courage to join MassResistance on Boston City Hall Plaza when the "marriages" began on May 17, 2004: Bill Cotter (Operation Rescue Boston), Rabbi Yehuda Levin (Orthodox Rabbinical Alliance of America), Rev. Rob Schenck (Faith and Action), and Rev. Patrick Mahoney (Christian Defense Coalition), and one lonely Catholic Deacon (whose name is lost to history). But since Governor Romney had issued a statement instructing the citizens to "follow the law," few showed up to protest or pray as the illegal "marriages" began that day. The establishment pro-family groups didn't want to make waves, appear disrespectful, or seem "hate driven," so they sat that day out.

May 2004 demonstration in front of Faneuil Hall: Article 8 Alliance/MassResistance emphasized the unconstitutionality of the "same-sex marriages" set to begin a few days later. We asked the governor to "Tell the Judge NO." But Governor Romney never bought into the idea of "separate but equal powers." He bowed to the Court, and his political ambition. (The author is standing on the left.)

And so the players got away with cheating

In the months and years that followed the Massachusetts court ruling, only MassResistance seemed to understand what was really at stake. We fought on, with no help from outside organizations. We campaigned to have the four errant judges removed from office. For that, we were called "extreme" by our supposed conservative allies.

Meanwhile, the "mainstream" pro-family group pursued a fanciful constitutional amendment (which would have allowed civil unions) through to its defeat in 2007, wasting valuable time, energy, and resources. They remained allied with Governor Romney through all his prevarications, despite his culpability for implementing SSM. (They made no secret of being offended by our disagreement and "impolite" tactics – i.e., speaking the truth).

All the way to the very end of his term, we tried to convince the governor to issue an executive order admitting his error and halting SSM. (Perhaps it was unrealistic to expect a politician to admit his mistake. But the point needed to be made.)

The radicals were watching the pro-family collapse closely. This was their test case. Tactics they learned and perfected:
The radicals got away with it. Concern over "judicial activism" after the Goodridge ruling was a mere blip in the conservative media which quickly faded.

Worse yet, the national Republican establishment gave Governor Romney a huge pass when he became the Republican Presidential candidate in 2012. His record was whitewashed or ignored, not only on RomneyCare but also on his unconstitutional implementation of SSM and his support for the Governor's Commission on Gay and Lesbian Youth. (Just one example: Romney's Commission headliner in 2005 was "transgender warrior" Leslie Feinberg, editor of Workers World, who led teens in their annual Youth Pride parade).

It came as no surprise to read a few months ago that 23 of Romney's 2012 Presidential campaign staff signed the "Republican" petition to the Court urging the Supreme Court to rule for SSM. After all, their standard bearer had made his position clear long before. In 1994, he told the homosexual Log Cabin Republicans and the Boston "gay" newspaper that if elected Senator he would fight for "gay rights" and even do more than Ted Kennedy "to establish full equality for America's gay and lesbian citizens." His actions as governor in 2004 fulfilled that promise.

We tried to warn everyone over the past decade where this was all going from our bunker at ground zero. It wasn't just about false "marriage." It was about the demise of the rule of law and the Constitution. It was about judicial tyranny. If we'd had help holding the line in Massachusetts a decade ago, things might be very different today. 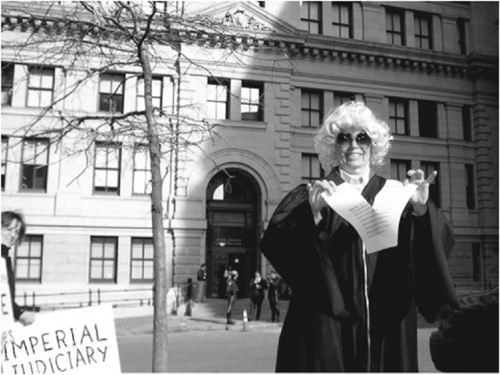 2005: Protesting the Mass. Chief Justice's shredding of the Constitution in the 2003 SSM ruling. Author is on the left holding sign vs. "imperial judiciary."