Mitt Romney was the enabler. This is how his government-dictated health plan is playing out. And he's still proud of it. When he does touch on defects in his health plan, he never mentions abortion coverage as a problem. He's either fine with it, or realizes he has to downplay it to get the conservative vote.

When the law was first implemented, there was a $50 copay for a RomneyCare elective surgical abortion. Now RomneyCare abortions are "free" for a $0 copay (or $50-$100 in some plans). In fact, the $0 copay shows up as early as 2008 at the Massachusetts Health Care Connector site. (The "Commonwealth Care" plans cover low-income residents, many of whom pay no monthly premiums.)

Of course, the abortions are not exactly free. We, the taxpayers cover the cost, whether we want to or not.

Amazingly, as overall RomneyCare costs and insurance premiums escalate, the copay for abortion drops! Why?

Because government health care is promoting abortion. This is really about "population control" by arrogant politicians and bureaucrat elites, righteously implementing Margaret Sanger's eugenics dream. They don't like excess people, especially if they're "low income."

HHS Secretary Kathleen Sebelius recently shocked conservatives with her statement that, "The reduction in the number of pregnancies compensates for cost of contraception." For such people, it's an easy jump from contraception to abortion. Just think of all the health care that won't have to be provided if a baby is disposed of before he's born.

They view pregnancy (other than in their own families) as a negative health "condition." It's perfectly fine — and even enlightened — to see a baby as a cancer to be cut out and thrown into the hazardous waste bin.

To what extent does Mitt Romney fit in with that "enlightened" crowd? Possibly, he's just motivated by his overweening ambition — to the point of not caring about anything other than going where he thinks the votes are. Whatever his motives, he cannot erase his severely pro-abortion record.

Romney's own record is clearly in support of "a woman's right to choose" to kill her baby, and pro population control:

1994: In his U.S. Senate debate with Ted Kennedy, he said: "I believe that abortion should be safe and legal in this country. I have since the time that my mom took that position when she ran in 1970 as a U.S. Senate candidate. I believe that since Roe v. Wade has been the law [sic] for 20 years, that we should sustain and support it. And I sustain and support that law [sic] and the right of a woman to make that choice." (Video)

2002: In his campaign for Governor of Massachusetts, Romney told Planned Parenthood he supported Roe v. Wade, state-funded abortions for low-income women, insurance coverage of contraception, expanded availability of "emergency contraception" (the morning-after abortion pill), buffer zones around abortion clinics, and "age-appropriate sex education" in the schools. He also noted his support for the state law allowing a girl under 18 to bypass her parents and get a judge's permission for an abortion. "I will preserve and protect a woman's right to choose and am devoted and dedicated to honoring my word in that regard. I will not change any provisions of Massachusetts' pro-choice laws," he said in a debate. (See another of his unequivocal pledges in this video.) He picked a pro-abortion running mate for Lt. Governor. 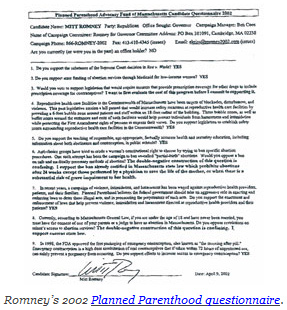 2002-2006: As Governor, Romney never expressed religious-freedom concerns over the 2002 state law requiring employers to offer health insurance including contraception benefits. It was just a cost issue to him.

2004 (November 9): Romney claims he converted to a pro-life outlook following consideration of embryo and cloning research. (So, an abstraction supposedly woke him up on the human life issue? Yet, decades' worth of descriptions of abortion techniques and graphic images of tiny babies torn limb from limb had not affected him?)

2005:
2006:
After his "conversion" and governorship: Romney still declares abortion to be a state's rights issue, believes abortions are acceptable in the case of rape and incest, and says some human embryo research is fine.

2011-2012: As candidate for the 2012 Republican Presidential nomination, Romney refused to sign the Susan B. Anthony pledge and is a no-show and major Republican pro-life forums (see here and here).

Free abortions are a predictable outcome of empowering government bureaucracies with mandating standards of coverage. Did Governor Romney not imagine how things would "progress" — or did he?

Certainly, the Democrat-controlled "legislature was counting on a Democrat governor to succeed Romney to put the real regulatory thumb screws in place." Romney was certainly aware that the next Republican Governor candidate would be very unlikely to win, since one reason he chose not to seek re-election was his own weak standing in the polls. (In any case, his hand-picked Lt. Governor and 2006 Republican Governor candidate, Kerry Healey, was proudly pro-abortion. She would have had no problem with this evolution of RomneyCare.)

The conservative media are understandably upset over the rediscovery of Mitt Romney's July 2009 op-ed, urging ObamaCare to include an individual mandate (for each citizen to purchase health insurance or pay a fine) as pioneered by RomneyCare. (See RedState and National Review.) That op-ed contradicts Romney's recent statements that RomneyCare is just a state solution, and he didn't see it as a model for federal health care reform.

The individual mandate is not the only mandate in RomneyCare. Health insurance companies are told by the RomneyCare Health Connector authority which benefits they must include in their various plans, and what the copays will be. One of these mandated benefits is surgical abortion.


Besides the individual mandate, Governor Romney's op-ed also proposed government-managed cures to address the government-caused cost spiral generated by the government-designed fee-for-service structure. Patients, he suggested, should be "required to pay a portion of their bill, except for certain conditions" — to be chosen, of course, by the government.... nowhere does the op-ed make any mention of the Constitution. [Emphasis added.]


Thus, Governor Romney opened a wide door. So now, surgical abortion is one of the "certain conditions" in Massachusetts that has no copay (or a very low copay in some plans).

And yes, there's also the issue of that bothersome Constitution — whether state or federal — that Romney chooses to ignore (as he also did when implementing "gay marriage" in Massachusetts).

The conservative media should pay more attention to the mandated benefits side of RomneyCare. As we are seeing at the federal level, bureaucrats who implement legislation exercise tremendous control over how these mandates evolve. It's only a matter of time before ObamaCare regulations follow in RomneyCare's footsteps, and forces coverage for surgical abortions — with or without copays.

If people are upset now with mandated contraceptive coverage, wait until abortions are added to Kathleen Sebelius' must-do list. She is no doubt eager to push the ObamaCare cure for that bothersome "condition" (pregnancy) — namely, abortion.

RomneyCare encourages women to abort their babies, and the taxpayers are forced to pay

RomneyCare's $0-$100 copay for a surgical abortion will certainly result in an increase in abortions. The real cost of is carried by taxpayers. This violates the religious beliefs of a majority of citizens.

None of this seems to bother Mitt Romney. He never mentions his RomneyCare abortion benefit, or its moral violation of the citizenry.


... there is no provision in the [RomneyCare] law for a subscriber's right of conscience. Without a conscience provision, the individual mandate can lead to abhorrent consequences that make a mockery of its justification on grounds of personal responsibility.


Romney could have vetoed the entire final version of RomneyCare, but instead he signed it. He played with a top-down government healthcare system and we, the citizens, lost.

Romney still defends his "bold" law as a major step forward overall, and refuses to take the blame for any problems now cropping up:


Governor Romney now says that he cannot be held responsible for the actions of the [RomneyCare] Connector board, because it's "an independent body separate from the governor's office." However, many critics of the Massachusetts plan warned him precisely against the dangers of giving regulatory authority to a bureaucracy that would last long beyond his administration. (Michael Tanner, Cato Institute, 2008. Emphasis added.)


Many conservatives simply do not trust Romney to change course if he becomes President. Since he likes his RomneyCare, does he really believe it's imperative to overturn ObamaCare?

FREE ABORTIONS funded by the taxpayers: This RomneyCare outrage alone should disqualify Mitt Romney as a Republican candidate for President.