August 14, 2012
A hurricane had struck, and people were huddled together listening to an old preacher praying with great oratorical effects in the midst of the violent storm. He cried out, "Send us the spirit of the children of Israel, the children of Moses, the children of the Promised Land."

At this an old man with less oratory skill but more directness prayed, "Lord, don't send nobody. Come yourself. This ain't no time for children." [1]

There are times in life when nobody but the Lord will do. America is experiencing just such a time.

Nothing better demonstrates how much danger this nation is in than the deep separation currently existing between its citizens. Basing his words upon Mark 3:25, in his famous "House Divided" speech in 1858, Abraham Lincoln admonished: "A house divided against itself cannot stand." Quite frankly, that same admonishment is needed again today because the American republic is swiftly moving toward a division every bit as great it was before the Civil War. Its ability to stand permanently is in great peril.

Pew Research recently referred to the void between Americans as the growing "God gap." It noted that for the last two decades, election exit polls show a divide in religious commitment and participation between those who vote Republican and those who vote Democrat. People who attend religious services more often are more likely to vote for Republicans, while those who attend religious services less frequently, or are non-religious, are more likely to vote for Democrats. [2]

Through its values survey conducted every five years, the research organization found 92 percent of Republicans stated they never doubted the existence of God — a figure that had only changed by 1 percent since 1987, when it was at 91 percent. However, in the last ten years, Democrats have declined in their confidence of God's existence, dropping a whopping 11 percent to a mere 77 percent in comparison to the Republicans' 92 percent. [3]

The report states, "From 1987 through the end of the 1990s Republicans and Democrats expressed roughly equal levels of religious commitment. But since then, Republican commitment has held steady, while a declining majority of Democrats hold traditional religious views. The trend away from religion has become substantial among liberal Democrats in particular." [5]

Interestingly, the divide also exists racially. Pew Research noted that blacks which comprise 25 percent of the Democratic Party have a higher level of commitment to religious principles. White Democrats dropped in their commitment to religiosity by 17 percent just since 2002 — from 85 percent to 68 percent in 2012. And among non-Latino whites, 83 percent of Republicans said prayer was an important part of their daily lives, that they believed in a final judgment, and that they never doubted the existence of God; in comparison to only 50 percent of non-Latino white Democrats. [6]

It's clear from such findings what's at the heart of America's real differences. It's about values, the nation's belief systems — its two worldviews. University of Virginia professor of religion, James Davison Hunter, sited in his book of a few years ago, Culture Wars: The Struggle to Define America, the two primary groups battling for the soul of the nation. One group he argued holds to "an external, definable, and transcendent authority" in life. From that authority, these same people derive absolute concepts of "what is good, what is true, how we should live, and who we are," he said. The other tends to reinterpret historic faiths "according to the prevailing assumptions of contemporary life," rejecting external authority, like the Bible, and seeing truth as something relative, ever evolving, unfolding, and to be discerned on the basis of reason and experience. [7]

Again, Hunter, as far back as 1991, though he never used the phrase, recognized the "God gap." The great question is; Do Americans actually realize this is the real divide between them? Does America see the "God gap"?

Religion is about how we understand the world and the way it works. At the bottom of every major public-policy issue is a question of religious authority. Are rights given by the state or are they given by God? Is man made in the image of God and life therefore sacred, or is he simply evolved from the primordial sludge — subject only to the survival of the fittest? Is marriage and family something to be defined by political correctness, or is it something created and expressly determined by the Creator in a way that transcends all eras of time. Is it morally right for the state to spend more wealth than it takes in, or must it abide within the parameters of its providential provision? Is government ethically authorized to indiscriminately take property and redistribute it as the state deems best, or must government honor God's eighth commandment entitling a man to his own private property? Is America to remain one nation "under God," or will it be a nation that becomes a law unto itself? 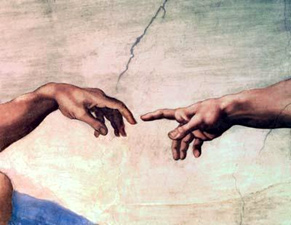 These questions, which show the huge chasm of understanding and vision, are so fundamental in nature, America must ultimately choose between the two answers. There can never be any binary blending that will ultimately work. "For what does righteousness and wickedness have in common? Or what fellowship can light have with darkness?" (2 Corinthians 6:14).

Abraham Lincoln also noted in his "House Divided" speech that America could not remain "half slave and half free." Neither can this nation remain half God-fearing and half God-abandoning.

Liberty cannot be sustained by the children of the Republicans, the Democrats, whites, blacks, Latinos, etc. This ain't no time for children. Only the Lord can save us. Only the Lord can bring us together. And he will do it, when we repent of our sins and once again give him his rightful place of authority among us.

The "God gap" must be filled.

[7] Quotes by James Davison Hunter, Culture Wars: The Struggle to Define America, 1991, Basic Books, a Member of the Perseus Books Group, pp. 44, 45 as provided within comments made by Terry L. Johnson, The Kind of Government We Want in Election Day Sermons, edited by David W. Hall, The Kuyper Institute, Oak Ridge, Tenn., 1996