February 16, 2013
The First Amendment to the Constitution reads, "Congress shall make no law respecting an establishment of religion, or prohibiting the free exercise thereof; or abridging the freedom of speech, or of the press; or the right of the people peaceably to assemble, and to petition the Government for a redress of grievances."

Can you imagine someone seriously arguing the government cannot interfere with free speech, while simultaneously contending neither should citizens be allowed to speak whatever they choose with regard to issues of state? What if the government were to say, speak whatever you will, but when it comes to politics you should remain silent? You have no right to bring your opinions to bear on the political process.

Can you imagine someone seriously arguing the government cannot interfere with a free press, while at the same time advocating that neither can the press use its influence to affect matters of state? That would be a violation of the "separation of press and state."

The point here is such assertions with regard to free speech, freedom of the press, and freedom to peaceably assemble and redress grievances, would be ridiculous and gut the very purpose of the First Amendment. Nevertheless, with respect to America's first freedom, the freedom of religion, this notion of a two-way impregnable wall of separation between religion and its moral influences on the state is erroneously accepted. And God help the supposed religious fools that hope to correct it.

Nothing in the First Amendment was ever meant to suggest our nation's Founders were trying to protect the state from the church, the government from the press, etc. The purpose of the first ten amendments to the Constitution was to create a one-way wall to protect the citizenry from the government, not the other way around. They were setting up a barrier to safeguard the public from abuses of power, not to save the state from the church or any other function of the people.

The concept of the "separation of church and state," as it's largely understood today, was first introduced by Chief Justice Hugo Black in Everson v. Board of Education in 1947. Black drew the alien view from a brief written by ACLU lawyer, Leo Pfeffer. The ruling turned Thomas Jefferson's phrase "separation of church and state" in a letter to Danbury Baptists of Connecticut in 1802 on its head. Afterward, the ACLU would use it via the courts to force Christianity out of the public arena for decades.

What's even sadder is many Christians have been poisoned by it and either forgotten or were unaware that the moral ethic of civil liberty and the Christian reality of spiritual liberty are interlocked. Actually, the great principles advocated for a free Republic were originally made by those who knew the internal liberty that comes through Christ alone and is proclaimed on the sacred pages of the Bible.

This is substantiated by voluminous sources, none of which are greater than the following statements by some of America's greatest Presidents.

George Washington noted, "It is impossible to rightly govern the world without God and the Bible."

Andrew Jackson contended, "That book [the Bible], sir, is the rock on which our Republic rests.

Benjamin Harrison opined, "If you take out of your statutes, your constitution, your family life, all that is taken from the Sacred Book, what would there be left to bind society together?"

Woodrow Wilson said, "The Bible is the one supreme source of revelation of the meaning of life, the nature of God, and spiritual nature and needs of men. It is the only guide of life which really leads the spirit in the way of peace and salvation. America was born a Christian nation. America was born to exemplify that devotion to the elements of righteousness which are derived from the revelations of Holy Scripture."

Franklin Roosevelt expressed, "We cannot read the history of our rise and development as a nation without reckoning with the place the Bible has occupied in shaping the advances of the Republic. Where we have been the truest and most consistent in obeying its precepts, we have attained the greatest measure of contentment and prosperity." 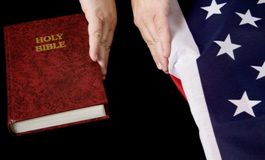 But perhaps a warning from Harry Truman best sums it up: "The fundamental basis of this nation's laws was given to Moses on the Mount. The fundamental basis of our Bill of Rights comes from the teachings we get from Exodus and Saint Matthew, from Isaiah and Saint Paul...If we don't have a proper fundamental moral background, we will finally end up with a totalitarian government which does not believe in rights for anybody except the State!"