May 10, 2014
Keke was born during the mid-nineteenth century in a Georgian village. She came from a poor background of serfs. After the abolition of serfdom, her family moved to Gori. At the tender age of eighteen she married Beso, a twenty-two-year – old from Caucasus who had come to Gori to set up shop as a shoemaker.

It was in Gori, with its meandering streets, orchards, and peasant huts that Keke and Beso found a home, which was an old adobe shack with brick corners, a leaky roof, with a kitchen and one other room lit by two small windows and floored with brick chips. It was furnished with only a small table and a stool, a couch with a straw mat as a mattress, and an old noisy sewing machine.

When Keke was first married, she was an attractive young woman with beautiful chest-nut red hair. She was illiterate. While Beso made shoes, she worked her hands to the bone as a washerwoman, scrubbing floors, and doing the work of a seamstress. Within a three year period, she had three children and each of them died in infancy. At the age of twenty-three, she had her fourth child, a son.

Keke, more than anything in the world, wanted her son to become a priest. She wanted a better life for him – a life of faith and devotion to God. Beso, unfortunately, had become a drunkard. Their home was full of quarrels and violent fights. So dysfunctional had things degenerated that one day the son threw a knife at his father. Eventually, Beso would leave home.

Now that Beso was gone, Keke and her son would move into the house of a priest, where she worked as a domestic. It seemed to be the ideal situation. The neighbors respected Keke because she had experienced such a difficult life.

She was completely devoted as a single mother to her child. Keke would sing him folk songs and sacrificed to keep him well fed. She loved him deeply and soon was able to manage to get him into a local church school by working for the school as a cleaning woman, a laundress, and a seamstress as a part of the agreement. She sewed so much and for so many people she started to lose her eyesight, but her prayers, patience and diligence saved her boy and provided opportunities he would have never had otherwise.

Keke loved to hear her son sing solo chants at Mass. But her hopes for her youngster would lead to much disappointment when she was questioned by police concerning his involvement in a clash between police and strikers. Something was happening to her young man. He was changing and would become one of the leading revolutionaries of his day.

In time, Keke would witness the ascendency of her son to the highest place of power in the land. Consequently, she was given a couple of rooms in a palace to live in. She would sometimes visit the seat of the nation's power, but she was never really comfortable with it.

Every day she missed her son. Sadly, he only visited her twice for the remainder of her life. Nevertheless, she would content herself with sending him his favorite walnut preserves. Once she even wove him a blanket. In the dim light of her little bedroom with an iron cot, she had stock piles of newspapers, everyone with something about a speech by, or a photograph of her beloved.

She would try to live up to his position of state, denying herself various privileges and comforts of life, just to make certain she would never give the wrong impression. The last thing she ever wanted was to do something that might bring reproach on him.

But Keke now lived in an atheistic communist regime and that posed a problem. You see, as she got older, Keke's devotion to her faith was becoming an issue. She turned her room into a private chapel, complete with various religious icons. Her son had her taken back to Gori, where she would eventually develop pneumonia and die. She wasn't even allowed to see a priest before her death. Her son didn't attend her funeral and she was buried in the quiet of the night without ceremony. Her grave would only be marked by a granite slab, with no cross – the symbol of the faith that kept her strong throughout her hardships – the symbol of the values that sustained life for her son in those early years and provided hope for the both of them when there was little.

Keke was a marvelous mother to her son, Josef, for as long as she lived. She loved him. She wanted him to be a priest. Instead, he would become the Dictator of the Soviet Union for nearly a quarter of a century, Josef Stalin.

In a land of freedom like America, we tend to think primarily in terms of individual rights and responsibilities, only because we are accustomed to liberty. We think if we do right, in our own lives and families, then all should be well. And, unfortunately, we fail to recognize that we are all interconnected in ways that we would never imagine. What happens in the culture plays a huge role in the outcomes of our lives and the lives of our children.

Aleksander Solzhenitsyn once spoke of his beloved country, saying:


"Over a half century ago, while I was still a child, I recall hearing a number of old people offer the following explanation for the great disasters that had befallen Russia: 'Men have forgotten God; that's why all this has happened.' Since then I have spent well-nigh 50 years working on the history of our revolution; in the process I have read hundreds of books, collected hundreds of personal testimonies, and have already contributed eight volumes of my own toward the effort of clearing away the rubble left by that upheaval. But if I were asked today to formulate as concisely as possible the main cause of the ruinous revolution that swallowed up some 60 million of our people, I could not put it more accurately than to repeat: 'Men have forgotten God; that's why all this has happened.'"


God's judgment on a nation is a terrible thing. God says to a nation that turns from him:


"Your sons and daughters will be given to another nation, and you will wear out your eyes watching for them day after day, powerless to lift a hand...You will have sons and daughters but you will not keep them because they will go into captivity...Because you did not serve the Lord your God joyfully and gladly in the time of prosperity, therefore in hunger and thirst, nakedness and dire poverty, you will serve the enemies the Lord sends against you. He will put an iron yoke on your neck until he has destroyed you" (Deuteronomy 28:32, 41, 47, 48). 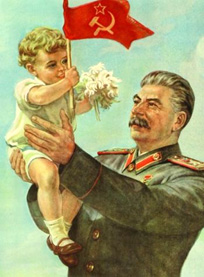 Certainly God's judgment, as conveyed by the wise elders of Soviet Russia to Solzhenitsyn looked a little different than the judgment ultimately brought on ancient Israel described by Moses in Deuteronomy, but the principles are the same. Wicked rulers gain power, truth is suppressed and freedom is lost. Worst still, we are apt to lose our own children to these forces and there will be nothing we can do about it.

It's not simply what happens in your own home that determines everything. It's what happens in the culture. Our culture, not just individuals, but our society's laws, its institutions, etc., must be restored to their religious foundations, lest even the righteous lose their posterity to evil.

That's a lesson, I think, that can be legitimately gleaned from the life of Ekaterina (Keke), the good mother of Josef Stalin.

These are depressing thoughts as we approach Mother's Day, 2014, but let those who have ears to hear, hear.

The author gratefully acknowledges that he has drawn heavily for the historical material in this article from "Mothers: 100 Mothers of the Famous and the Infamous." New York: The Diagram Group and Paddington Press, 1976, pg. 232