March 21, 2015
Ron Reagan, son of former President Ronald Reagan, has proudly stated in an ad that he's "not afraid of burning in hell." Reagan did the 30 second ad for the Freedom From Religion Foundation (FFRF). The same ad for radio was running a year ago on "The Randi Rhodes Show." [1] The television ad is currently running on CNN and has been aired on "The Daily Show." ABC, NBC, CBS, and Fox have all declined to run it, but it has aired in local metropolitan markets. [2]

In the ad, Reagan introduces himself and proclaims he is "an unabashed atheist." He proceeds to say he's alarmed "by the intrusions of religion into our secular government." He follows by making his pitch for FFRF, urging support for "the nation's largest and most effective association of atheists and agnostics, working to keep state and church separate, just like our Founding Fathers intended." And then with a sarcastic smirk, he concludes, "Ron Reagan, lifelong atheist, not afraid of burning in hell."

Reagan's assertions about the Founding Fathers, separation of church and state, and the secularization of America are erroneous enough and the information to prove their inaccuracy is voluminous. It might also serve to address at length the case for the existence of God, but I'll let someone else speak to those issues for now. Instead, let me share some thoughts about the nature and tone of the ad.

First, the Scriptures teach, "The fear of the LORD is the beginning of wisdom: a good understanding have all they that do his commandments..." (Psalm 111:10).

The most important positive fear in life is the fear of God, not the "shaking in your boots" kind, but more of a reverential respect and awe for His person and power.

Ron Reagan appears to be a remarkably intelligent man. He's quite articulate. He's obviously well-educated. Nevertheless, no matter to what degree he excels, he could never be considered a wise man.

It's not the scholarly, the more logical, the more sensible or rational individual that thumbs his nose at the existence of God and arrogantly declares he has "no fear of burning in hell." It is, in fact, just the opposite. Only a very foolish man would make such a remark.

The chief cause of calamity, crime, and chaos can be summarized in the passage, "There is no fear of God before their eyes" (Romans 3:18). Thus, as one sage put it, "I fear God and next to God I mostly fear them that fear him not."

Second, it's nothing less than amazing that atheist groups are evangelizing for unbelief. They're working feverishly to remove every vestige of America's religious heritage, filing legal challenges against religious displays on public grounds, launching book projects to give prison inmates alternatives to religious literature distributed in penitentiaries, putting up billboards that mock Christ and the stories of the Bible and Christian-based holidays, organizing Atheist Pride Marches, planting atheist churches, sending out people in city parks with juggling shows and informational booths, and running radio and TV ads. [3]

Still, it's not the gains atheists have made that I find nearly as disturbing as the craven silence of Christians who rarely share their faith, especially when their light is so desperately needed in a time of great spiritual darkness.

A study conducted by Lifeway Research determined 80% of people who attend church one or more times a month, believe they have a personal responsibility to share their faith, but only 61% had told another person about how to become a Christian in the last six months. The survey asked these same believers how many times they had invited an unchurched individual to attend their church or some other church function. Nearly half responded, "zero." [5]

What a rebuke and terrible shame when the people who reject God's existence are seemingly more zealous to recruit for incredulity than many of God's own people are in sharing the very hope of the world.

No wonder our nation is going to hell in a handbasket. Much of the church isn't faithfully and earnestly communicating the Gospel or engaging the culture with its terms. Yet the atheists and the agnostics are certainly passionate to win the masses to their way!

Lastly, Ron Reagan may joke about hell, but it's no laughing matter. It is God's grace that warns us of that awful place of suffering. Even though fear isn't an illegitimate motive for getting right with God, it's not His intention to scare us into obedience. God loves us and doesn't want anyone to go there. Hell wasn't made for man, but for the devil and his demons. Nevertheless, if we refuse to bring our lives into order with the God who made us for himself, just as Satan and his minions rebelled, then there is no place for us in the end except that universal trash heap where lives in waste of God's purposes are properly and forever discarded. 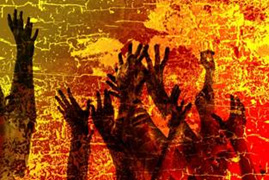 I think it is somewhat humorous, however, that Reagan repudiates with such fervor his disbelief in hell. It is a fact of psychology we tend to deny with the most zeal the very things we actually fear the greatest. I have to wonder if Reagan makes fun of hell because deep down in his soul he's afraid such a place is where he might go.

Perhaps that's another reason some of the major networks, ABC, NBC, CBS, and Fox are uncomfortable with running the ad. Their executives recognize there is an inexplicable sentiment in all of us that senses that after death there is a judgment. That feeling can be dreadful.

But there is no need to be anxious over the matter. Christ, the Son of God, came to live and die on the Cross for our sins. He arose from the dead to deliver us from the threat of eternal punishment. In Him is the gift of eternal life, freely given to anyone who will put away their sin and trust in Him as their Savior, as well as submit to Him as their loving and benevolent Lord.

A wise person believes these things, the faithful Christian shares them often, and the foolish person fearfully mocks and scorns into the mouth of perdition.