Good mothers are a lot like the Lord who gave them their indispensable role in life – they provide light unto their children – a light that directs them, which in turn illuminates the way for many others.

Such was the life of Nancy Elliott, the daughter of a Presbyterian minister. She was a devout Christian woman who demonstrated a great depth of courage and character in adversity.

In the small township of Vienna in Ontario, Canada, Nancy taught in a little two-room schoolhouse and showed her curious nature and love of learning. It was in Vienna she would also meet and marry, Sam. Sam was a tavern keeper, an occupation that must have somewhat startled her religious and most respectable family. Nevertheless, Sam also had been a carpenter and built Nancy a house with his own two hands.

Sam and Nancy lived quite happily in their new home together. By 1836, the couple would have four children, two girls and two boys. But then trouble came that seriously reversed their fortunes.

In 1838 discontented colonists in Upper Canada would fail in a plot against the government known as the Mackenzie Rebellion. Sam joined a few who wanted to turn the British provinces of North America into a republic. Some of these men who made unsuccessful attempts to overturn the existing powers would be hanged. Sam was a part of the revolt and troops were sent to arrest him.

He fled to America, more specifically Milan, Ohio, where he founded a lumber and grain business. After a very long separation from Nancy and the children, Sam was finally able to send for them.

Taking Nancy and the children over Lake Erie in a barge was Sam's friend, Alva Bradley. In Milan, Sam built Nancy another home where two more children were born, both of which died in infancy, but then came another boy in February of 1847 who survived. He would be named after their dear friend, Alva. The family affectionately called the boy, Al.

When Al was just seven, the family moved again and this time to Port Huron, Michigan. Unfortunately, it was there Sam's business would fail and Nancy had to take over running the family.

Al was sent to school, but his formal education would only last for twelve weeks. One day the boy came running home to tell his mother that his teacher had referred to him as "addled" or slow. Al was heartbroken. Nancy was so angry over the matter she marched down to the school and told the schoolmaster that Al had more brains in his little finger than he had in his entire body. And from that moment on, Nancy took over the boy's education.

Nancy and little Al would form a strong bond as she taught him. She had a great gift for teaching in a way that was interesting. And like his mother, Al shared her tremendous curiosity for life. Recognizing Al's attraction to science, she bought him a chemistry book and allowed him to perform experiments down in the cellar.

Nancy also combined learning with discipline of character. When Al was a grown man he would sometimes describe the way that she kept a birch switch behind the clock in the living room. 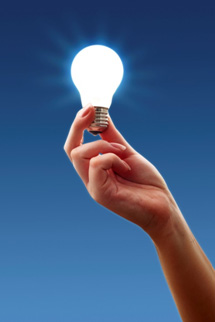 Al would leave home to live on his own at the tender age of twelve. He didn't see much of his mother after that, but he loved her and thought of her often.

In her later years, Al's mother would suffer from mental illness, decline into senility, and die in April of 1871. Al would kneel at her graveside during the funeral. A childhood friend described her in this fashion: She "loved every child in the neighborhood and used to meet us at the gate, as we passed on our way to school with her hands full of apples, doughnuts and other goodies."

Al once said of her, "With a mother of different mental caliber I should have turned out badly. But her firmness, her sweetness, her goodness were potent powers to keep me in the right path...My mother was the making of me. She was so true, so sure of me, and I felt I had someone to live for, someone I must not disappoint."

Al would indeed do well in life, even become famous for a number of his inventions, but one particularly great and even symbolic for what his mother had so richly invested in his life. Al's full name was Thomas Alva Edison, son of Samuel and Nancy Elliot Edison, inventor of the light bulb, and subsequently founder of the Edison Electric Light Company in 1878.

Mothers, we might say, are bearers, givers of light – light borne and also imparted by their children to the whole world.

The author gratefully acknowledges that the history of the life of Thomas Edison's mother was drawn from: Moore, Bernard, and Richard Ehrlich. Mothers: 100 Mothers of the Famous and the Infamous. New York: Paddington, 1976.